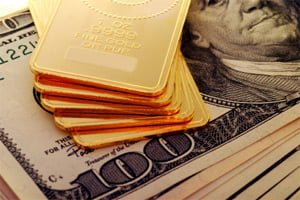 The contrarian recommendation for gold since 2001 through today has been to buy. As capital was pumped into the economy via easy credit, the price of gold, stocks, real estate and most other assets rose significantly. The rise in prices is a causal effect of increased money supply and pulling forward spending via lax credit lending standards.

The inflationists argue, and rightly so, that this continued monetary expansion by the Federal Reserve will ultimately lead to the demise of the US dollar.

But there is another contrarian theory that has been proposed by thinkers like Mike Shedlock, Karl Denninger and economic forecaster Harry Dent – a deflationary collapse resulting from massive credit deleveraging.

Mish (Shedlock) argues that deflation is not actually the threat, because it is already here and there is a good reason it has not taken hold just yet:

Deflation is not a threat because deflation is here by any practical measurement.

We are already in uncharted territory, and the risk is what the Fed, Congress, the Treasury department, the Administration, and central bankers globally do to prevent something that needs to happen: the liquidation of malinvestments and debt.

Thus the “real threat” (and risk) is not deflation, but rather the foolish attempts by Keynesian clowns to circumvent what needs happen.

But what exactly would a cleansing of the system mean for asset prices? If forecaster Harry Dent, author of The Great Depression Ahead, is projecting the deleveraging cycle accurately, then prices may very well fall off a cliff for all asset classes:

Clearly the most bearish outlook I’ve come across–one that the gold bugs would surely be quick to characterize as off the wall–is what I heard from an investment newsletter writer, Harry Dent, Jr., editor of the HS Dent Forecast in Tampa, Fla.

Taking note of $42 trillion in private debt, Dent expects half of that to disappear in a de-leveraging process within the next few years. That means, he says, the onset of deflation (falling prices), which will cause the dollar to go up and gold to go down.

Under such a projected scenario, Dent looks for gold to drop to $250 an ounce, a giant-sized slide that he expects will begin to kick off this year. “The fact of investment life,” he says, “is that the dollar is now going up and gold is now going down, meaning it’s time to sell gold.”

There are trillions of dollars in debt that need to be deleveraged within the system. Gloom Boom & Doom Report publisher Dr. Marc Faber argues that while deflation is possible in the near-term, the powers that be will do whatever it takes to avoid it, and in the end, will be successful:

If deflationists are right (and they could be right in the near term, in my opinion), then the US government bonds and the dollar will rally, while stocks, commodities, real estate, and lower-quality corporate bonds will tank. But if I am very confident about making one predicition, it is that, if we have further deflation in the immediate future, there will be not one more, but many more stimulus packages and further massive monetisation. So, government debt-to-GDP could easily double within five years. Now, does anyone seriously think that the dollar and government bond prices wouldnâ€™t at some point begin to reflect concerns about the financial condition of the US under these conditions?

Whether or not The Federal Reserve can create enough money to offset the contraction within the system is the real question, and according to Harry Dent, there is a historical precedence to draw on:

“…history tells us clearly that once a massive deleveraging process starts, it continues and is impossible to stopâ€”although it can be stalled, as has occurred here. Unemployment is a lagging indicator and is expected to continue rising in the early stages of the recovery. Thus, unemployment is the biggest threat to the developing recovery given the unique fragility of the banking system.”

An additional consideration to be made in regards to gold, separate from other assets, is gold’s standing as a monetary unit. During the late 1980’s and throughout the 1990’s, as monetary supply increased and prices in energy, food, and other sectors rose, the price of gold actually declined. Thus, gold does not always rise in response to inflationary pressure. Gold, argues Martin Armstrong, “is not the hedge against inflation but against the collapse in the confidence of government.” In this sense, gold can be described as the currency of last resort for individuals and governments.

Many economists compare today’s depression to the Great Depression of the 1930’s, and the name of the game then was deflation. In the 30’s we saw asset price deflation across the board, except, of course, in gold. Though it was a forced price increase through President Roosevelt’s confiscation and revaluation, it seems the government knew that the price of gold needed to be higher in order to offset all the leverage in the system. The free market certainly understood the value of gold, as capital shifted into the only legal way to own the metal en masse – stocks like Homestake Mining.

One discrepancy in comparing today’s economic conditions to that of the Great Depression is that we had a different monetary exchange system in the 1930’s with gold pegged directly to the dollar, as compared to today’s floating exchange currency system, so it is difficult to apply past depressionary models to today’s environment.

Another consideration to be made is that gold, being money and being de-pegged from the US Dollar, may lead it to retain more purchasing power vs. the dollar than other assets. And in essence, that is the ultimate goal of any gold investor. In the event of a deflationary collapse in US dollar prices of the value of a car, a house, a company stock, or another currency, gold may also decline, but the decline may not be as significant as other assets.

We would also like to suggest an alternate scenario called biflation and originally proposed by Dr. F. Osborne Brown in 2003:

Biflation is a state of the economy where the processes of inflation and deflation occur simultaneously.

The price of all assets are based on the demand for them versus the volume of money in circulation to buy them.

With Biflation on the one hand, the economy is fueled by an over-abundance of money injected into the economy by central banks. Since most essential commodity-based assets (food, energy, clothing, precious metals) remain in high demand, the price for them rises due to the increased volume of money chasing them. The increasing costs to purchase these essential assets is the price-inflationary arm of Biflation.

With our debt based system, biflation is sounding more and more like a plausible outcome in the future. Thus, the price of essential goodsÂ  will be valued, in real terms (and nominal terms), at a higher price than non-essentials that are often purchasedÂ  by pulling sales forward through the use of credit (i.e. – house, car, boat, furniture, high-end electronics, etc.)

With so much uncertainty in today’s economic environment, it is impossible to project exactly what will happen to the US dollar, gold or other asset prices, so positioning oneself for a variety of scenarios may be the most practical approach. In a depression, be it deflationary or inflationary, the most important goal in terms of investing is to preserve as much wealth as possible.

If gold does hold true to its historical role as a monetary unit of last resort during times of economic, political and social instability, then regardless of deflation or inflation, it may remain a powerful wealth preservation mechanism.