The majority of Americans believe that recent government intervention into financial markets, the economy and corporate insolvency has reversed the economic downturn which was described by former Treasury Secretary Hank Paulson as being “on the brink” in 2008. The stimulus, bailouts and unrelenting quantitative easing by the Federal Reserve have thus far been perceived as having averted the further erosion of the U.S. real estate and equities markets. And though the Federal Reserve and economic analysts have recently readjusted their economic growth forecasts downward for the next six months, Americans no longer have to worry about, as Rep. Brad Sherman (D-CA) said on the house floor in October of 2008, the sky falling, multi-thousand point drops in stock markets and martial law in America.

The recovery – if our government, the Federal Reserve and mainstream media are to be believed – is on the road to recovery – albeit slowly and with some more pain ahead.

If we’ve “prevented economic collapse” and “avoided the depression many feared,” according to President Obama, inquiring minds are asking why the Pentagon and US Military are actively and aggressively engaged in planning responsive action to large scale economic breakdown and civil unrest scenarios:

Ever since the crash of 2008 the defense intelligence establishment has really been paying a lot of attention to global markets and how they can serve as a threat to U.S. national security interests. At one upcoming seminar next month they’re taking a look at a lot of the issues.

According to the report, the Army has spent time on financial market trading floors with JP Morgan and others, in the hopes that they can learn more about how a financial and economic attack may occur, and what the ramifications of such attacks on US stocks and bonds may be.

The Army, in a year-long war games series called Unified Quest 2011, is looking at a variety of possibilities and how to deal with them, including:

Clearly, the U.S. government is making contingency plans to deal with a worst-case, all-out-collapse scenario of not only the economy, but our social and political systems.

The war gaming, according to reports, began in 2008 at the onset of the economic crisis, but planners from not just the United States, but around the globe, may have been aware of the dire possibility of economic collapse even earlier. It’s well known that the U.S. government as well as foreign counterparts have been preparing bunkers and continuity of government for decades, but recent preparedness activities suggest that the planning in some aspects has been expedited. Anecdotal evidence indicates that the US government has been the leading buyer of freeze died foods for the last couple of years, and private emergency shelter contractors have reported a shortage in equipment and supplies for building personal-sized bunkers.

In a previous report titled Homeland Security To ‘Regionalize’ Emergency Supplies Over Next 90 Days, we pointed out that FEMA, headed by Department of Homeland Security, is decentralizing emergency supplies from one main distribution facility in Washington D.C. to fifteen regional facilities around the country. Even the Russians and the EU are in high gear. Russia has reportedly begun planning and development of 5,000 new underground bunkers for the city of Moscow scheduled for completion no later than 2012. The EU, in 2006, commissioned the building of a “Doomsday Seed Vault” in a mountainside several hundred feet above sea level. The facility was built and fully stocked with millions of seeds from around the world within 18 months.

Though the activities of global governments in recent years could potentially be chalked up to standard national security preparedness and contingency planning, the most alarming indicator that the U.S. government is not just looking at one-in-a-million possibilities in terms of economic collapse is the training of several thousand U.S. Army soldiers to respond to domestic policing and enforcement issues that may include evacuation, detainment and riot response. The real possibility of the need to deploy U.S. military under martial law exists, and the U.S. government is spending millions of dollars training and equipping soldiers to do so if necessary.

For those who may have their doubts about some of the scenarios these soldiers are training for, we point out the sign being held by one of the riot role players below. 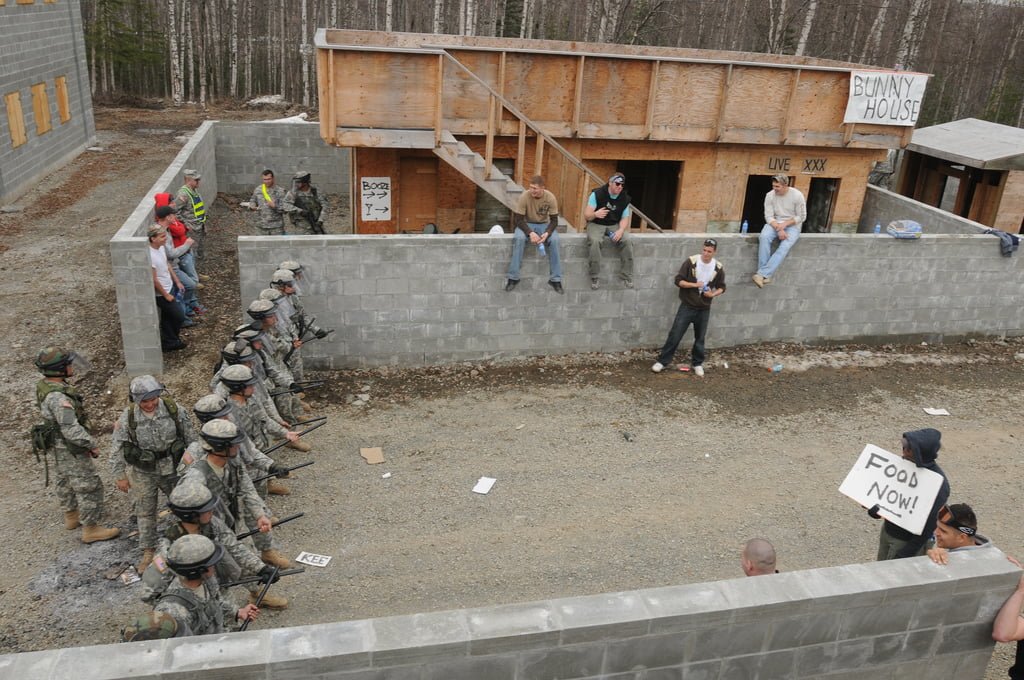 It is hard to imagine an America under an economic attack so serious that the U.S. economy could suffer a collapse that would essentially put an end to the world as we have come to know it. But for those who think rationally, especially given the current malaise in financial markets and the U.S. dollar, the possibility cannot be ruled out.

As such, any government acting in the interests of national security would take steps to deal with and respond to such an event(s).

For the average populace prole, however, there may not be any real assistance should something like this occur. First and foremost, any government response to an attack on our financial and economic systems will have the primary goal of maintaining order and the rule of law, as well as continuity of government. This is a given.

This means that if, for whatever reason, be it a collapse of the US dollar that leads to disruptions in the flow of U.S. food supplies or an economic war that goes “hot” leading to worst-case scenarios like cyber attacks on U.S. infrastructure elements like electric and water utility plants or an EMP attack, the government’s mandate will not be to provide food and security for your family, but rather, for those who are deemed essential to accomplishing the primary goals.

This means that when and/or if it hits the fan, you’re going to be on your own.

If you haven’t yet, we recommend taking the advice of FEMA (pdf), who suggest that every family have emergency preparedness supplies on hand, including food and water, for at least a couple of weeks.

For the hard core “preppers” amongst us, you may have already considered this possibility and the chance that the fallout from an economic collapse may lead to an inability to perform daily transactions with the U.S. dollar,Â  food supply disruptions, violence and looting, and even a completely ‘down-grid’ where utilities are completely out of service. If you haven’t, what would you do if you awoke to news of a total meltdown in the US dollar – one that led to rejection of the US dollar as a currency for international settlement?

Will you be the one facing off against highly trained U.S. military personnel holding a “Food Now” sign at an inner city riot?

The U.S. government and many of their counterparts around the world are getting ready – just in case – maybe you should be too.