The Most Perfect Medium 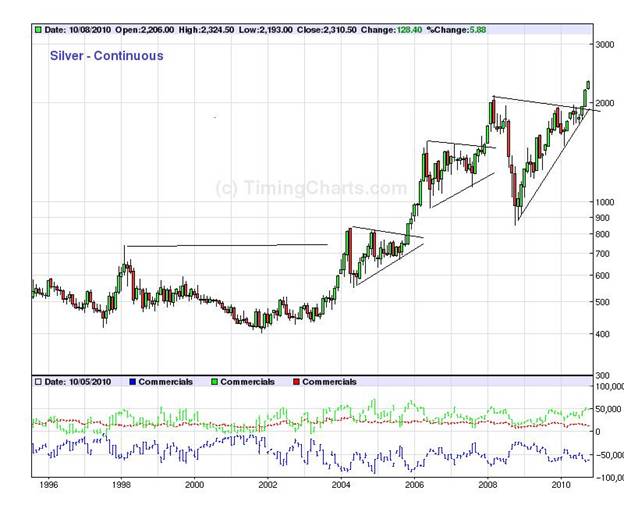 The precious metals markets moved into high gear last week with silver up 4.5% and new highs in gold and the HUI. Meanwhile the Wall Street Journal explained:

â€œDriving the recent spate of [currency] flows has been anticipation that the Federal Reserve will restart its efforts to stimulate growth through purchases of government debt that inject more money into the banking system â€“ a practice known as quantitative easing or â€˜QE.â€™â€

Sad, sad news in the daily paper this week. We live in a world where the leaders of our country, and every country in the world, believe that there is nothing more to the production of wealth than to simply create, out of nothing, the money which symbolizes it. The Journal again:

â€œInvestors who had been betting on the dollar switched their wagers in the past few weeks as they grew convinced the Fed will pump still more money into financial markets to bolster the struggling U.S. economy â€“ essentially diluting the value of the dollar.â€

For several years, we have watched as the precious metals markets have told us of a truly amazing advance. Since their lows in the last century, both gold and silver have multiplied by a factor of more than 5. Both metals have traced out powerful up trends with repeated bullish chart patterns. And now we know the answer why. The Government of the United States, in the person of Ben Bernanke (and his fellow officials at the Federal Reserve), is trying to reduce the people of America to medieval serfs, to steal their wealth and to give it to the likes of Goldman Sachs (and a few other institutions which have obtained their great wealth not by producing it but by having the Government steal it for them).

The mechanism of this historic theft is counterfeiting. Indeed, the government has set up the counterfeiting department (the Federal Reserve System). It prints money and gives this new money to its favorites (who respond via bribes disguised as campaign donations and job offers).

But as we gold bugs have been arguing, the printing of money causes the depreciation of the currency, and this must cause all prices (denominated in that currency) to rise. And this is taking the form of a general increase in commodity prices, itself led by the precious metals.

Sadly, America was once governed by wiser men. In 1816, Thomas Jefferson commented:

“We are now taught to believe that legerdemain tricks upon paper can produce as solid wealth as hard labor in the earth. It is vain for common sense to urge that nothing can produce but nothing; that it is an idle dream to believe in a philosopher’s stone which is to turn everything into gold, and to redeem man from the original sentence of his Maker, ‘in the sweat of his brow shall he eat his bread.'” –Thomas Jefferson to Charles Yancey, 1816. ME 14:381

Jefferson was talking about the Second Bank of the United States. He and James Madison had abolished the First Bank of the United States in 1811, but Madison backed down and allowed a second bank in 1816. This bank was later destroyed by Andrew Jackson and Martin van Buren in 1836 (as a result of Jacksonâ€™s overwhelming victory in the 1832 election). It was this battle against the second bank which gave birth to the (real) Democratic Party.

If the Democratic Party was born to destroy the central bank and if the Democrats hold power today, then why is it we have a central bank which keeps on printing more and more money? Indeed, in the easing of 2008 we knew that we were being robbed for the benefit of Goldman Sachs and other Wall Street Houses which had accumulated toxic assets. But here in late 2010 we are not even allowed to know who will receive the wealth which is being taken from us.

Once Jackson had destroyed the Second Bank of the United States, the U.S. began a period of economic growth unprecedented in human history. A cornucopia of wealth flowed such as mankind had never seen. The human lifespan increased. A continent was tamed. One after the other, new machines and devices for the improvement of peopleâ€™s lives poured out of the factories of the nation.

It should be noted that all this was accomplished without the hint of rising prices. From 1793 to 1933, the prices of basic wholesale goods came out the same. For most of this period, there was no word for unemployment for the simple reason that unemployment was so low that nobody noticed it, and nobody spoke of it. 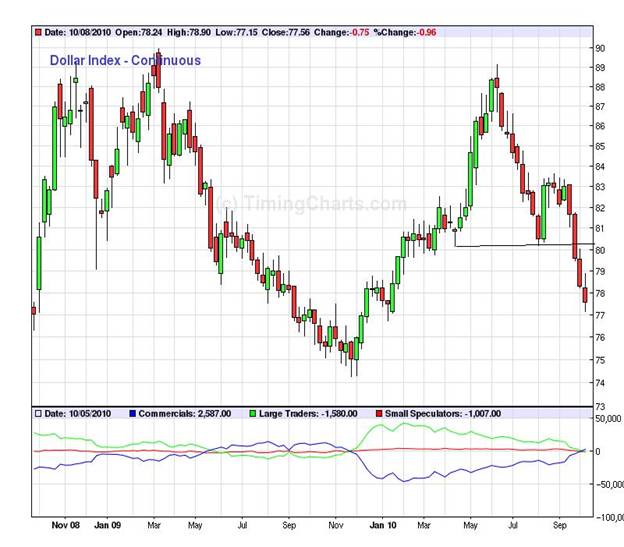 What Jefferson was saying was that the issue of paper money could not create real wealth. Wealth is (scarce) goods which satisfy a human need. In simple language, wealth is stuff. President Obamaâ€™s and President Bushâ€™s economic advisors do not know this. They keep saying that the printing of money will create stuff (â€œstimulate the economyâ€). One repeatedly hears the theory that the printing of money will so dramatically stimulate the economy that the extra goods thus created will cause a net decline in prices.

This theory (of a net decline in prices) is repeated throughout the financial world. Every time this forecast is made it proves false. But the people who hear the forecast have short memories. They forget that the last time they heard the same forecast it was also wrong. Ditto, ditto the time before that. They do not look at the facts. They look at the impressive credentials of the con artists who are deceiving them. And so they believe, again and again and again.

The important thing to understand about this confidence game is that it only devours its own. To be protected against it, all you have to do is to see reality as it is. The printing of paper money does not create wealth. Jefferson again.

“Specie is the most perfect medium because it will preserve its own level; because, having intrinsic and universal value, it can never die in our hands, and it is the surest resource of reliance in time of war.” –Thomas Jefferson to John Wayles Eppes, 1813. ME 13:430

If you wish to be protected against the depreciation of our currency by Ben Bernanke, then specie (gold or silver) is the most perfect medium. Any real good will provide protection. However, gold and silver have been chosen as money for certain reasons of convenience. They are the easiest to hold and to exchange with others. They have been used as money for 2500 years, and they are the only legal monies under the United States Constitution. As Ben Bernanke destroys the (Federal Reserve note) dollar, all real goods will rise in price, and gold and silver will lead (are leading) the way. The people who believe the establishment and plan for â€œdeflationâ€ will be destroyed. The people who believe Thomas Jefferson will be protected.

To assist the good people with the technical details of speculating in gold or silver and in general dealing with the problems created by a paper currency, I publish a fortnightly (every two weeks) newsletter, the Gold Bug. To subscribe, go to my web site, www.thegoldspeculator.com and press the Pay Pal button ($300). Or you may send $290 to The One-handed Economist, 614 Nashua St. #122, Milford, N.H. 03055 ($10 cash discount). Our most recent issue was dated Oct. 1, 2010.