Silver – On the Move

The events of the past few months have been dominated by the decision of the Federal Reserve to undertake a further, massive easing. Since the emphasis will not be on lowering interest rates (because they are effectively zero), it is being called a quantitative easing (an easing by virtue of the quantity of reserves which the Fed pumps into the banking system) and has acquired the name QE2 (quantitative easing 2). Immediately, gold and silver broke into new all-time highs, the dollar collapsed against most foreign currencies, and many individual commodities started to race to the moon (which Ben Bernanke describes as a threat of deflation).

At any rate, this gives us the opportunity to make some observations on the gold and silver charts and to learn something about the current market and acquire some skill in charting technique. (Note, my newsletter, the One-handed Economist, shifted from gold to silver in the issue of Sept. 17, 2010, and the profits are coming in.) Dear Mr. Bernanke, I can tell you what is happening as a result of your recent easing, and it certainly is not â€œdeflation.â€) 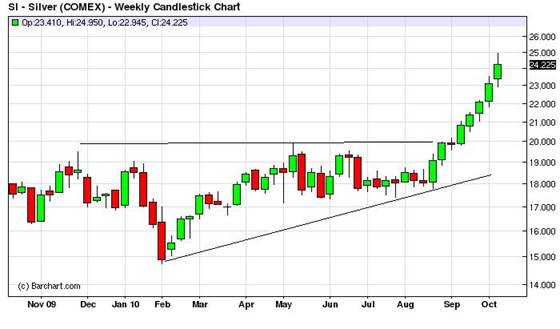 Here we see the ascending triangle in silver (weekly basis) which formed over the past year. It broke out early in September. Those who have studied the precious metals over this major term bull move have noticed that the triangle has been a very popular chart pattern. And for a given chart pattern to dominate in a given market is very normal. Each market is made up of traders, and every trader has his premises about how the market will act. As these premises unfold in trading action over the course of a bull or bear market, we get the same kind of chart pattern repeating over and over, and that chart pattern becomes characteristic of that bull/bear market.

A triangle is a continuation pattern. It has 4 turning points. The first and third are connected to form the top line, and the second and fourth are connected to form the bottom line. The above silver chart is a special case where the top line is horizontal. In a more common triangle, the top line slants down, and the bottom line slants up. Thus the market has one aspect which is bearish and one aspect which is bullish. In short, a triangle is a battle between the bulls and the bears. It typically occurs after a long move in one direction (say bullish) and represents a pause while the market makes up its mind what to do next.

The triangle is called a continuation formation because experience has shown that the pause usually continues in the same direction as the original move. The triangle is often called a coil because the small, balanced moves which make it up are followed by an explosive move. It is like a snake coiled to strike.

The ascending triangle above is a special case. Selling comes in at points 1 and 3, at the same level. And buying comes in at points 2 and 4, at a higher level. That is, the buyers are more aggressive than the sellers. This is a tip-off that the break-out, when it occurs, will be to the upside. 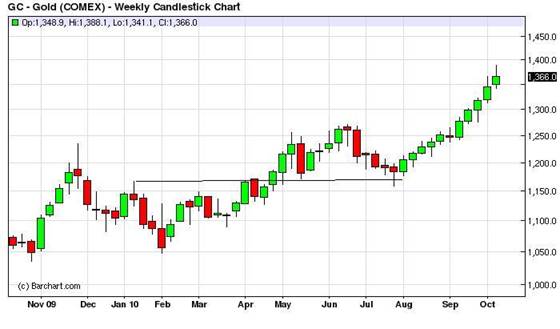 For those of you who are wondering just how far this current move in silver will carry, the price objective line offers a clue. It is currently closing in on $26. So we must consider the possibility that there will be a short term reaction in silver, which will take us back to the breakout point ($20-21). 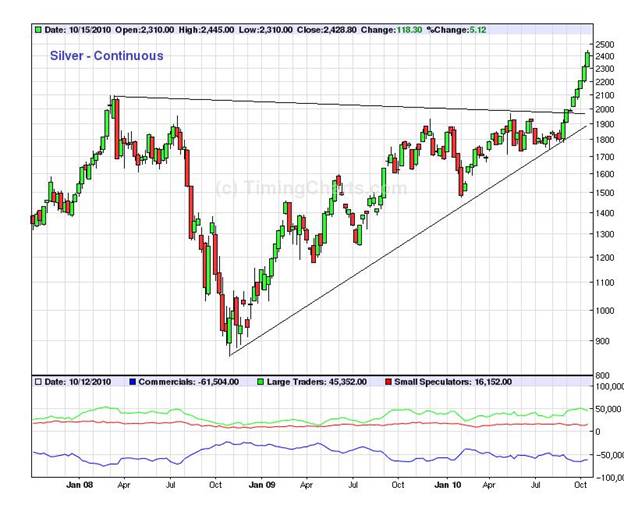 If we look at the bigger picture in silver, we see another ascending triangle (or almost ascending triangle). Look at the power of the breakout above the March 2008 peak of $21. Two points occur to the experienced chartist. One, silver is about to make a powerful move to the upside. And two, for the short term and in the minds of those people who believe in a fair price silver has gone up too far, too fast. Silver has spent most of the past 2Â½ years in a small range just under $21. To most traders, $21 silver is the high side of the fair price. If you ask one of these people just what is the fair price for silver, he would say, â€œWell, I donâ€™t know exactly, but it is certainly not $26. $20 or $21 is more fair.

So if we see silver hit its price objective line and then give a few short term sell signals, this will tell us to expect a short term decline. The larger chart tells us that we have gone too far, too fast and that a pull back to the top line of the triangle is in order. In other words, the last sellers will be those who believe the fallacy of the fair price and think that the fair price is about $20-$21. When these people have done their selling, the way will be clear for the next bull phase.

An interesting situation is developing and can be seen by comparing the 1 year charts of both gold and silver. Normally the two precious metals move together, but starting in late August there is a significant disparity. In its entire bull move since the Abelson low in late July, gold is up about 15%. But despite starting a month later silver is up 35%. This is, particularly in the minds of the short term traders who believe in the fallacy of the fair price, too far and too fast. Silver is too far above its fair price.

We can wait for it to hit the price objective line from the (1 year) ascending triangle. At that point, I will probably look for one or two bearish signals before deciding to step aside. (I will not go short gold or silver as long as the major term bull market is in place.) My objective will be to play for a return to $20-$21, and if this comes about, it will be one of the great buying opportunities of the decade.

And what will happen to gold during a short term reaction in silver? Probably not too much. It has had a much smaller run-up, has no specific chart pattern with a price objective and ought to pick up support from its June high a little above $1,250. True-blue precious metals buffs might just switch from silver to gold and see what happens. 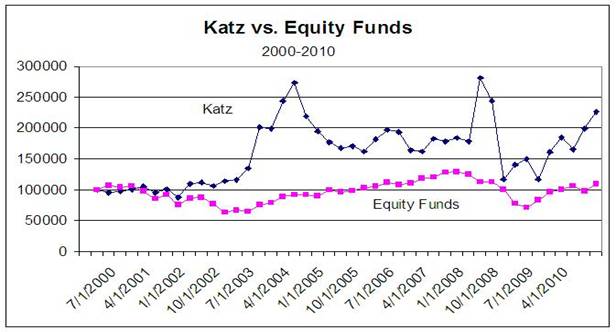 My newsletter, the One-handed Economist, is issued fortnightly (every 2 weeks), dated Friday and costs $300 per year. Above is my Model Conservative Portfolio, which started with $100,000 at the beginning of the century and is up 146% over 11 years. The average U.S. equity fund is up 9% over the same 11 years. If you want advice on the financial markets, the above is an indication of the type of advice you get from the One-handed Economist. You may subscribe via Pay Pal by visiting my web site, www.thegoldspeculator.com and clicking the Pay Pal button. Or you may subscribe the old fashioned way by sending $290 ($10 cash discount) to: The One-handed Economist, 614 Nashua St. #122, Milford, N.H. 03055.