Silver can be described as goldâ€™s little brother. It lags along behind gold, underperforming for a long time. Then, all of a sudden, it comes to life, makes up all of its underperformance and goes on to exceed gold to the upside.

Gold has a reputation for stability and conservatism. Silver is volatile and subject to big price moves â€“ both up and down.

The key technical measure on silver at the present time is the price objective line, which started in March 2008 at 21. Technical theory does not say when silver will reach its price objective, only that at some point it will. Further, this is a minimum price objective. The commodity may get up to the objective line, back away for a while and then make a second return to the line. 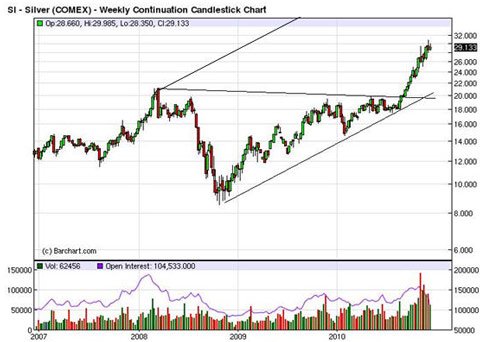 The chart on page 1 contains a great deal of information about the course of the price of silver over the next few years. But to understand the chart properly, it is first necessary to be able to readâ€¦THE ENGLISH LANGUAGE.

I am sure that, when you were back in the 8th grade, you used to grumble about your English course. â€œWhat use is all this stuff anyway?â€ â€œI can read OK. What I want to do is to get into the real manâ€™s world where they are making money.â€

Well, here you are in the real manâ€™s world where we are making money. (I moved from gold into silver in mid-September of this year held for the big autumn run-up, briefly stepped aside in November and then reestablished my silver position.) And your instructor is telling you that one of the requirements is the precise use of the English language. Your 8th grade English teacher was right.

For example, a pennant formed in silver in November with a price objective of $40 (probably by mid-February). This is one number, simple and easy to play. However, the price objective line for the ascending triangle in silver on p. 1 is continuously rising. It is about $60 right now. It will be at $100 in January 2012, and by Sept. 2012 it will be at $150. This does not mean that silver absolutely has to get to one of these points. But it does have to get up to the line at some time. Clearly, the nearer points on the line will be exceeded, but the further points will never be attained.

Here is where I have difficulty and plead for the help of the English teacher. For example, I may make the statement above, â€œThe price objective line in silver will be at $150 by September 2012.â€ Indeed, this is a true statement. But some subscribers will read this as, â€œSilver will be at $150 by September 2012.â€ This is a much simpler, but wrong statement. It is so much easier to deal with the simple than the true. It is sort of like the case of the policeman who comes over to help a drunk looking around in the gutter. â€œI lost my car keysâ€ says the drunk. So the policeman helps him look. After they have looked for a while, the policeman says, â€œAre you sure you lost them here? And the drunk says, â€œNo, I lost them in the middle of the block.â€ So the policeman says, â€œThen why are we looking here?â€ And the drunk says, â€œThe lightâ€™s better here.â€

This technique does not work too well for finding lost keys, and it certainly does not work at all well for taking money out of the commodity market. You cannot neglect essential elements of the puzzle simple because â€œthe lightâ€™s better here.â€ This is what I mean by precision of language, and if you did not learn this in 8th grade, then go back to your teacher, beg her forgiveness and crack the books on a special study course to learn now what you should have learned then.

As noted, silver is more speculative than gold. As a result, when the precious metals markets are conservative, traders move into gold. During such periods gold will outperform silver. For example, starting in 2008 the media in this country started screaming â€œdeflation.â€ Both gold and silver got hit hard, silver worse, but they recovered quickly. In Sept. 2009, gold broke out of its ascending triangle to the upside. A year later silver did the same thing. By that time, gold had advanced by 25% (March 2008 peak to early Sept. 2010), and silver was flat. (OHE was able to remain in gold for the period up to early Sept. 2010 and then switch to silver at that time.)

A move in silver will normally last half as long as the corresponding move in gold and peak not too far apart from it. (In early 1980, gold peaked in January; silver peaked in March. The gold move of the late â€˜70s lasted 3Â½ years. The corresponding silver move lasted 2 years+.)

A move in silver is a lot of fun because it has great volatility to the upside, but this often happens with regard to commodities. Special situations develop, and there is simply not enough supply to meet demand. A case in point was early November when silver peaked at $29. The silver bulls had been making money through the autumn, and they kept plowing this money back into the market. The more money they made the more they plowed back, and the cycle built on itself.

Obviously, this cannot go on for too long. Either the exchange will cool things down by raising margin requirements or fundamental traders will come in with large sell orders. Either way, the sellers can break the market, and â€¦watch out below.

By the way, there has been a group of people going around the gold/silver web sites alleging a giant conspiracy to manipulate the price of silver in a downward direction. And I am getting sick of this. To manipulate any free market is virtually impossible. If one buys an economic good and then tries to manipulate it higher, one must spend an enormously greater amount of money doing this than one can reasonably make. And there has been no successful manipulation on record in economic history.

First, this was proven by the free market economists. Second, it was tried by Bunker Hunt in the late 1970s. This idiotic venture cost him almost $6 billion of his fatherâ€™s inheritance money (the H.L. Hunt fortune).

Anyone who wants to make money in the speculative markets MUST anticipate some other people coming in to buy his good away from him at a higher price. If you canâ€™t see that coming, then you should not be in that market. I see people coming in to buy gold and silver away from me because Presidents Bush-Obama have been printing massive amounts of money, and this will cause all goods to skyrocket in price with the precious metals first on the march. But this is reality, not manipulation. And, quite frankly, a scheme as fantastic as is being alleged, is nothing more than the invention of crackpots. No one can manipulate market forces for 10-20 years.

If you are listening to these allegations, then you need to wake up and study basic economics. Good speculation has to be based on economic principles. If you donâ€™t know what you are talking about, then your chances of making it in the markets are not equal to a snowball in H___.

Since gold and silver will probably peak at about the same time, I will be looking for signals from both the chart on p. 1 and below to coincide. 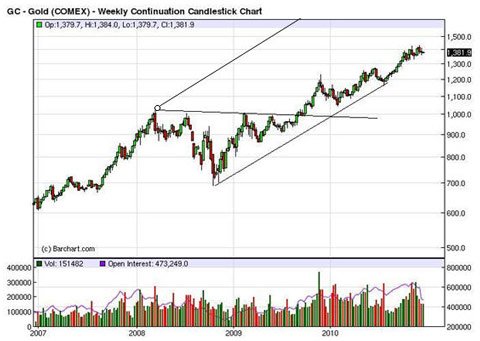 We are in the middle of a powerful move in the precious metals markets. These markets are on fire, and now is the time to strike while the iron is hot. You all know that Ben Bernanke is completing a program, called QE-2, which will result in an approximate tripling of the U.S. money supply from mid-2008-mid-2011. And this will lead to an approximate tripling of the U.S. price level within the coming 2-3 years. It is to help you protect yourself and make profits from this massive creation of money that the One-handed Economist is focusing on the precious metals markets at this time. If you would like to subscribe to the One-handed Economist ($300/year), then go to my web site, www.thegoldspeculator.com, and press the Pay Pal button. Or, send $290 to: The One-handed Economist, 614 Nashua St. #122, Milford, N.H. 03055 ($10 cash discount).