YOUR FREEDOM IS AT RISK: Marc Faber (“Dr. Doom”) Sees Socialism in America THIS DECADE!

With so many Americans not being world travelers, complacency has become the nation’s most pernicious epidemic. Few truly understand the scourge of socialism and even fewer have actually seen it firsthand. With an election year at hand, the voting public cannot make a truly informed decision unless they understand how the socialist virus can enter into any culture at any given time.

One individual who does understand and appreciate socialism’s impact is “Dr. Doom,” or Marc Faber, a world traveler who also happens to be a best-selling author and a highly accurate predictor of political and economic trends. Dr. Faber has earned the moniker “Dr. Doom” as an outspoken critic of global debt-driven economies and unsustainable central-bank-fueled equity market bubbles.

Portfolio Wealth Global has spoken with Marc Faber before, but our most recent interview with him revealed an especially disturbing trend in America. The rise of populism in the U.S. has deepened the divisions among us, setting the stage for radical ideologies to infiltrate American politics – and Dr. Faber has seen the effects of socialism firsthand and has an urgent message for the nation.

According to Marc Faber, socialism can develop under many different conditions, but it will usually emerge in systems that have great wealth inequality – the majority of the citizens aren’t prospering financially. You might think that the situation only applies to a nation like Venezuela or North Korea, but the growing wealth gap is an issue that’s as relevant in America as anywhere else.

Tearing at the fabric of America’s freedoms is wealth disparity that’s been literally widening for decades across multiple generations and presidential administrations. Beginning in the mid-1980s, the net wealth held by the top 0.1% of earners has steadily increased while the piece of the American pie held by the bottom 90% has relentlessly declined: 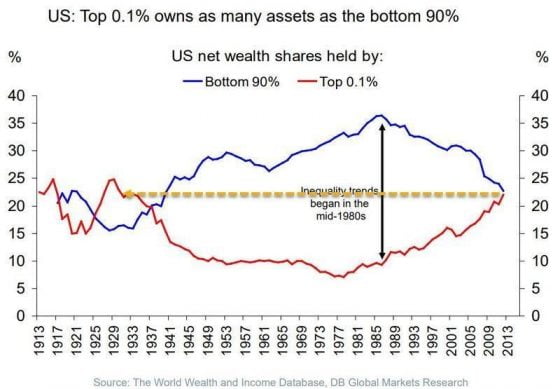 We observe that the first piece of the puzzle is in place for a socialist takeover in America. The average U.S. citizen won’t know the statistics, but they can at least observe the difference in lifestyle and opportunities between themselves and the wealthy elite. This can easily foster an extreme form of populist resentment that certain ambitious politicians will radicalize and use to their benefit.

The next step, according to Marc Faber, is for a demagogue like China’s Mao Zedong or Vietnam’s Ho Chi Minh to ascend to power and overthrow the existing elite; in modern-day America, that would translate to dismantling Washington.

Once the existing form of government is removed, the new leader is now able to introduce unapologetically socialist policies at will. If that sounds unlikely, remember that Dr. Faber has witnessed and researched what most people haven’t: countries where 50% of the economy is government spending. This is a hallmark of extreme socialist policy, and it’s now over 40% in the U.S.

With the government growing and taking a bigger share of the economy, according to Marc Faber, the economy cannot grow at the same pace as when the economy is small. As a result, a populist/socialist leader can come into power and institute a government takeover of American industry (again, a hallmark of socialism).

With production run by the government, the government can determine what’s available for consumption – in other words, they can effectively tell the people what they can and cannot consume. During his travels, Dr. Faber has seen this firsthand in Russia, Czechoslovakia (now the Czech Republic), and China, where he was shocked by the poor conditions in which the population suffered. 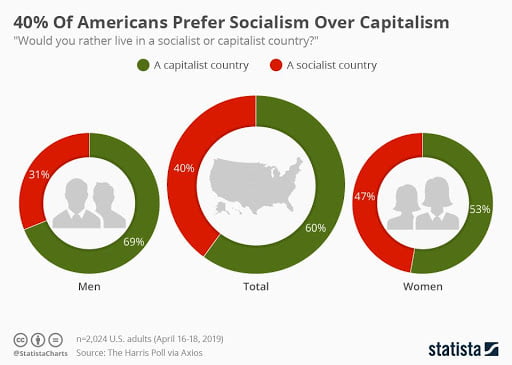 As Marc Faber explains, free-market capitalism allows the people to choose what they can produce and consume – and as long as that’s not in the hands of the government, economies can thrive. The fact is that no country can prosper without a free market, but that’s under siege because politicians are threatening to undermine the American free-market economy right now.

Dr. Faber is warning America to be careful not to slip into a totalitarian regime, which is easier to introduce under socialism than in a free market economy. The immediate threat in America is a government monopoly – the socialist takeover is already underway, and the consequences of inaction are unimaginable.

This is just the tip of the iceberg, and Dr. Marc Faber has much more to say to you, to America, and to the world. Be sure to download our complete report covering Marc Faber’s most critical predictions and warnings – it’s required reading for prudent sound money advocates who understand the madness of modern governments and banking today.