WW3 Has Begun, And It Is Digital: “New World Hackers” Claim Cyber Attack That Took Down Major Sites 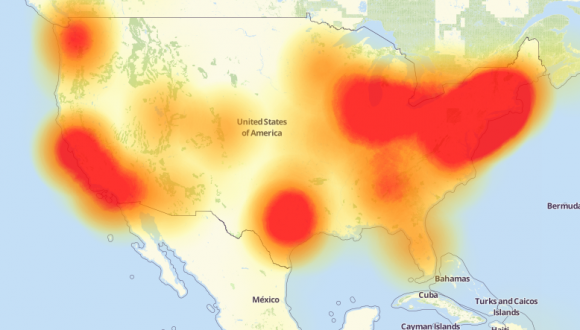 Get ready – it seems that this will be an October Surprise to remember.

The Internet is under attack through the United States and UK… and there is every reason to think that more is coming.

Reports confirmed that a distributed denial of service attack (DDoS) was carried out against the company Dyn, and disrupted much of the East Coast, and later the West Coast and other parts of the U.S. as well, taking down hundreds of major websites – including Paypal, Twitter, Spotify, Netflix, Amazon, Tumblr and Reddit and more.

It took hours for many of them to come back online.

The cause was a large-scale distributed denial of service attack (DDoS) against Internet performance company Dyn that blocked user access to many popular sites standstill.

Dyn … confirmed the attack, noting that “this attack is mainly impacting US East and is impacting Managed DNS customers in this region. Our Engineers are continuing to work on mitigating this issue.”

Here’s a log of updates for the attacks on Dyn Managed DNS infrastructure: 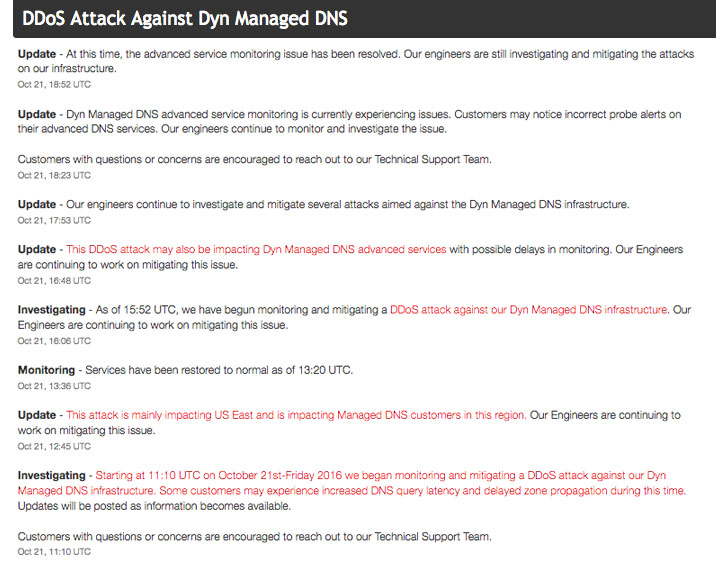 Speculation is that this could be a test run for larger attacks – and public demonstration of just how vulnerable Internet connected systems are. Things are coming to a head very quickly, and there is no telling what will happen as the U.S. election approaches. As the San Jose Mercury News reported:

“Say, not to panic anybody, but what if the (attacks) today were practice for 11/8 ?” high-profile pundit Keith Olbermann tweeted.

A hacking collective calling itself “New World Hackers” are taking credit – and they are based out of Russia and China, so there is little doubt that it will fuel the narrative for more war, tighter security and an age of online instability as the new world (where the dollar is no longer king) is sorted out. According to the Associated Press:

Members of a shadowy hacker collective that calls itself New World Hackers claimed responsibility for the attack via Twitter. They said they organized networks of connected “zombie” computers that threw a staggering 1.2 terabits per second of data at the Dyn-managed servers.

“We didn’t do this to attract federal agents, only test power,” two collective members who identified themselves as “Prophet” and “Zain” told an AP reporter via Twitter direct message exchange. They said more than 10 member participated in the attack. It was not immediately possible to verify the claim.

The collective has also claimed responsibility for cyberattacks against Islamic State. The two said about 30 people have access to the @NewWorkdHacking Twitter account. They said 20 are in Russia and 10 in China. “Prophet” said he is in India. “Zain” said he is in China. The two claimed to be taking “good actions.”

Perhaps, this major blackout of Internet services may even be a self-inflicted wound to make the establishment look like the victim, rather than the aggressor that Hillary’s legacy represents. Wikileaks has to be hurting her campaign, and it is difficult to say exactly how far things are going to reestablish credibility and take control of the situation.

Right now, Julian Assange is reportedly surrounded by police forces outside the Ecaudorian embassy in London – and his personal future, and that of Wikileaks remains up in the air. Only days ago, his Internet access was cut, with Ecuador under diplomatic pressure by the U.S.

Further Internet attacks are now pending, and it seems everything is potentially exposed. There is no way to be certain how massive future attacks could be – but the largest potential event would likely be an EMP, sending out an electromagnetic pulse powerful enough to take down the electric grid and fry virtually all unprotected electronics.

Individuals can and should prepare on two fronts – stored food and supplies necessary to sustain your family/group for a minimal of several weeks without power and essential services. People can also protect electronic equipment – primary or backup – in a Faraday cage (which will guard against EMP).

Additionally, emergency cash and alternative currency (such as gold and silver) reserves should kept on hands; identity protection measures should be put in place and all accounts, documents, paperwork and other sensitive items should be written down, photocopies and/or stored offline (on a USB, for example). A more detailed check list can be found here. Extra caution should be used with electronic banking and online payment systems.

The shadow government and its military forces have been preparing for extremes in all areas. Things are happening now that we have warned about for years – the cyber dimension of war means that everyone is on the battlefield:

Others worried the attack could be from a nation-state rather than simply an individual seeking to wreak havoc.

“This not just an instant job, this is something that was probably worked on for weeks if not for months by really competent people,” he said. (source)

The power to shut down commerce, communication and news feeds could either start – or stop – the kind of 21st Century war that is only now taking shape.

In what is perhaps a bit of planned irony, or a tip off to the perpetrators of this attack, video surfaced of Hillary Clinton in 2010 (as Secretary of State) blathering on about the importance of cyber security and intelligence protection.

In hindsight, no one could have done more to expose the United States’ secrets than the Madam Secretary herself – emails and more make this clear.

Will any of this stop her, or will she take power in spite of it all?