With the Economy in Shambles, More Americans Turn to Squatting: “Willing to Take the Risk” 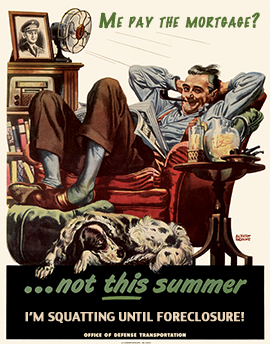 There have always been squatters, but the trend may be rising.

And the growing clash of squatters and abandoned properties suggests a boom-bust housing disaster for the economy.

The phenomenon was notable after the 2006 housing bubble popped, and has resurfaced in strikingly similar circumstances for many struggling Americans.

News8 in Tampa reported on the caustic reaction by law enforcement to squatters it believes may be using a manual that has been published and sold on Amazon on strategies about how to squat, for those “willing to take the risk”:

Crooks find empty houses all over Tampa Bay and make themselves at home. And now, 8 On Your Side uncovered training manuals on the internet. They teach how to get away with squatting.

The handbooks are brazen. A pamphlet for sale on Amazon for $61.20. An entry on Wiki-How entices tells squatters how to “take a whole house from someone if you’re willing to take the risk.”

It points out the best areas to squat and even advises to spruce up the home to throw off suspicious neighbors.

It reads like squatters are terrorist cells distributing training manuals to take over or strike an attack.

The weird lopsided report demonizes squatters as “arrogant” criminals who will be busted for their crimes, interviewing law enforcement about how to watch for and catch these “crooks.” It encourages residents in the community to spy on their neighbors, turn on suspected squatters and report potential signs of squatting to the police.

Yet the story never attempts to address the point about why there are so many squatters in the first place. Not a mention of the wasteland that has driven millions of Americans into poverty. Not a single high level banker jailed.

However, a survey of the gloomy economic news for the past decade shows a despair closing in on the country. Some 90+ million adult Americans out of the work force, record deficits and debts by individuals, businesses and governments at the federal, state and local level. Food banks and charities outstripped by demand for help.

The working classes have stagnant wages while the cost of living becomes more burdensome every day. Housing and food prices are particularly steep, while the market is rigged, and set to spring a trap of collapsing bubbles upon people throughout the strata of society who are inherently invested in and dependent upon the integrity of the system.

The system is designed to fail, and not everyone caught up in it is a criminal.

The vast majority of the abandoned homes being targeted by squatters belong to the banks, and many of them are foreclosures that represent working people being driven out of their homes by banks that may be operating outside the law.

After the 2008 economic crisis, squatters were prevalent, and even principled. Some even beat the banks at their own clouded title game in the aftermath of the mortgage crisis and earned the legal right to stay.

Under many state laws, simply establishing utilities, and holding bills addressed to the individual is judged as sufficient to prove legal residency; at that point, police may have no legal jurisdiction to evict a suspected squatter.

Today, a full third of adults under 35 live at home with their parents, an unprecedented statistic that was never imaginable to the upwardly mobile generations of the past. Many college graduates struggle to find a good job, or a paying one (i.e. internships) relevant to their training. Millions of Americans are settling for jobs they are overqualified for, displacing others struggling beneath them.

In 2015, things have not gotten better, and are indeed worsening again financially. Things are stretched too thin, and millions of Americans are losing their ability to hold it together. Desperation is inevitable. Naturally, people will do whatever it takes. Hence a history of tent cities, shantytowns, squatting in abandoned property and shacking up with friends and family.

Increasingly, these are not transient people with drug problems and unstable lives. Those are out there, too, of course, but it is so much more than that.

Many are working families facing disintegration. They are sleeping in cars and bending the rules for shelter because so far there is no better way. The bankers have soaked up all the assets, and the rights and the means of the people has been upended.

It is indicative of the times. There was a noted rise in squatting, tent cities and sleeping in cars in the years after the bailout, springing up in reports across the country. Now, this is returning as the economy rots. But there are new twists and mutations. Tents in California are being rented for $1000 in upscale neighborhoods for people with white collar jobs looking to tighten the belt in a painfully expensive housing and rental market.

Denver recently made news for sending a SWAT team to break up a community of tiny home residents, whose compacted quarters rest on mobile trailers. Many of them were built by charities as a way of empowering those in need. They were peacefully occupying a government-owned property where a low income housing project directed by H.U.D. had been terminated. On that abandoned property lived some of those displaced by policies, whose residences were criminalized by the authorities. Likewise, city codes across the country are restricting and banning tiny homes, “camping” on your own land and off the grid lifestyles.

If squatting is a threat to the community, people should take warning about the larger trends. When it rains it pours, and no one is planning to fix the holes in the roof since it is more likely just to cave in, sooner or later. Neither is anyone tending to the crumbling foundations beneath us.

Just be careful you don’t become an outlaw, too.

The truth is you must be prepared to be without the system. It is not a trustworthy master. The system has many stress points, and cannot be relied upon to take care of you.

Back On the Grid! Governments Ban “Camping on Your Own Land” Displacing Residents

Be Prepared to Be Without The System – Make It A Policy