What The Military Doesn’t Want You To Know: Expensive Aircraft Carriers Can Be Sunk With Cheap Missiles 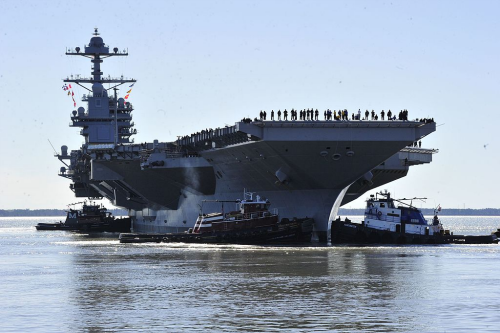 One of the cornerstones of Donald Trump’s presidential campaign was a promise to revitalize our military. There’s no doubt that it needs some help. These days it appears that the majority of our military units are not combat ready, and some aircraft squadrons have been forced to scrounge for parts in aviation museums. Trump’s response has been to urge Congress to increase the military’s budget, and drastically increase troop and ship numbers. Most notably, he wants to bring the US Navy’s aircraft carrier count up to 12.

However, there’s only one problem with that proposition. In this day and age aircraft carriers may be overrated. In fact, they may be downright obsolete when pitted against a modern military. That’s because they’re shockingly easy to sink with cheap weapon systems, which is also the opinion of a highly regarded British think tank:

The HMS Queen Elizabeth, Britain’s new aircraft carrier, could be sunk by a volley of missiles that cost a tiny fraction of what she is worth, according to a report from the Royal United Services Institute (RUSI) security think-tank.

The report argues that international rivals like Russia and China have focused their energy on finding ways to counter the West’s obsession with large, marquee projects like the HMS Queen Elizabeth.

“Missiles costing (much) less than half a million pounds a unit could at least disable a British aircraft carrier that costs more than £3 billion,” the report suggests.

“Indeed, a salvo of ten such missiles would cost less than £3.9 million.”

The authors argue that the UK and her allies face an “increased peer and near-peer threat from Chinese and Russian long-range precision missiles, which threaten large land, maritime and air platforms.”

But you’ll never hear that from our military, and especially not from the military-industrial complex. That’s because defense contractors can make a killing off of building these multi-billion dollar warships. They, being war profiteers, don’t really care if they’ll sink at the hands of second-rate military powers. Our own military and political establishment will never admit to how vulnerable our vast fleet of carriers are to missiles, because as the old saying goes, “generals are always fighting the last war.”

That’s why you should always question the military brass, when they start begging for more money and more advanced weapon systems. The truth is, we don’t need 12 aircraft carriers (especially when most countries with large military budgets only have 1 or 2),  and the military doesn’t need more money. What the military needs is more fiscal responsibility.

The Defense Department is in no position to ask for more tax dollars, when the Pentagon can’t account for $6.5 trillion. These people shouldn’t be trusted with our money, when they spend over a trillion dollars on a fighter jet that barely works. We shouldn’t give them an additional cent, when there are hundreds of military bases all over the world in places where we have no business being.

Donald Trump’s heart is in the right place on this issue. The military is in bad shape, after enduring budget cuts and 16 years of constant warfare. But the military doesn’t need more money, and a whole new fleet of aircraft and ships. He needs to drain the swamp at the Pentagon, take Mattis’ advice on closing unneeded military bases, and pull our military out of countless small conflicts that don’t serve our interests. He should also put more pressure on NATO nations to uphold their promise to spend 2% of their GDP on defense, which would allow us to reduce our military presence in Europe.

For too long, the military has been trying to do more with less. Our military has been weakened, because our forces are stretched too thin. Taking these measures would give our military more resources and time to recuperate and reach combat readiness, without increasing the military’s budget. A good first start, would be to stop building incredibly expensive aircraft carriers that are little more that floating coffins, and use those additional funds to help military units that have long been neglected.