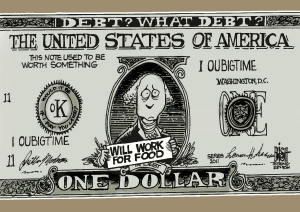 The dollar is losing value, but this fact is not just some recent phenomenon. In case you missed the charts comparing the decline of the US dollar to the Roman silver denarius, what they show is that the US dollar has, over the course of the last one hundred years, experienced a steady decline amounting to about a 95% loss in purchasing power, closely mimicking the fall of the world’s reserve currency circa the 2nd and 3rd centuries.

Every single day our central bank and the US government utilize the stealth tax known as inflation to make you poorer by increasing your cost of living. It’s so subtle that most Americans don’t even notice – or care.

In just the last decade alone, Brits have lost about 43% of their purchasing power for the most essential of all goods – food and energy.

Ordinary families have been crippled by the rocketing cost of essential goods over the past decade, a report has found.

The price of basic purchases, such as food and fuel, soared by 43 per cent over the decade from 2000.

These rising costs – far above general inflation – have already wiped out most of the gains in living standards made by families on low and modest incomes in the early 2000s, before the downturn began, according to research.

The statistics in the United States don’t fair any better. According to the inflation calculator, an item costing $100 in 2000 would now cost you $126, destroying some 26% of your purchasing power in just ten years. And, these calculations are based on the official statistics. Utilizing the actual, alternative data, prices have soared over 50% for essentials like food and gas in the last ten years.

Had you kept your money in cash since 2000, half of your wealth would have been wiped out by inflation (not including investment losses).

Despite what we’re told about our monetary policy and efforts to maintain a strong dollar, the evidence clearly shows that the dollar is moving in exactly the opposite direction over time, and it’s not done yet.

You can fully expect costs to rise going forward, as reported by the LA Times:

Get ready for more high food prices going into 2012 –- the USDA is projecting that next year will bring an overall spike of 2.5% to 3.5%.

Grocery store shoppers this year watched prices rise as much as 4.75% while diners in restaurants saw menu prices go up as much as 2.5%, with a surge near the end of the year.

These predictions, of course, are based on the official projections. As we’ve learned from past experience, whatever the government projects, you can triple it. In this case, we’ll likely see another ten percent plus increase in prices, and thus, even more erosion in your standard of living.

In normal times the price inflation could be ignored, as wages would adjust somewhat accordingly and employment would be plentiful. But the last decade has been anything but normal, and what’s actually happening is that our wealth is being deliberately and progressively transferred into the hands of government and the corporate elite.

Recent data reiterate this point, with some 100 million Americans in poverty or right on the edge. We are, by all accounts, becoming poorer and inflation has played a huge role.

The thing is, the historical perspective on inflation isn’t even the scary part.

What’s scary is that the US dollar’s domination as the world’s reserve currency may very well be coming to an end over the next few years. As that happens the dollar will lose even more value, likely more rapidly than ever before. So, what was once just a subtle and easily ignored effect on personal wealth and finances, will become a major crisis area for most American families.

And that doesn’t even consider the real possibility of a waterfall event, in which major US creditors and private sector investors lose complete confidence in the US central bank and Treasury department, and choose to take their credit investments elsewhere. If and when this happens the poverty rate in this country will sky rocket – and fully 90% or more of the population would, almost overnight, become as impoverished as those living in any third world nation.

It can happen, and the way things have gone historically, and the multitude of problems we face on an economic, financial, social and political scale, it is becoming increasingly probable the this will be the eventual result.

The only way to protect yourself in an atmosphere where wealth is being destroyed by the powers that be is to put as much of it into assets that completely take you out of their game. As we wrote in January of 2010 in Buy Commodities at Today’s Lower Prices, Consume at Tomorrow’s Higher Prices. It is our view that, even though we’re two years hence since we first made that recommendation, the advice is still as timely today as it was then. Consider those things that become money when the traditional mechanism of exchange is wiped out. Most essential assets like food, firearms and tools will not only retain their value, but increase it – and if stored and maintained properly, they’ll be available for use many years down the road.

So, while most Americans are scrambling to the perceived safety of things like cash, blue chip stocks and US Treasury bonds, leaving themselves at risk because those assets are denominated in dollars and require exchanges to operate, you can become your own central bank and commodities warehouse by investing in assets such as the 11 foods that last a lifetime and other post-collapse barter items and trade skills that will maintain their inherent value when other traditional assets become worthless.