Watch: This Changes Everything: The Do-It-Yourself LASER Shotgun: “Dangerous Is an Understatement” 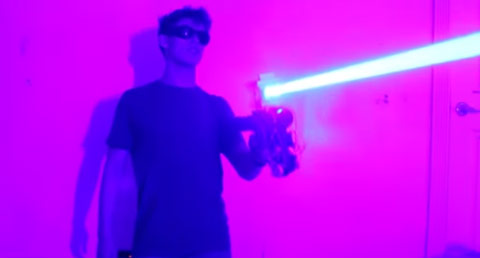 The world of self defense is about to change dramatically. Where today someone has the ability to protect themselves from perpertrators carrying a firearm or knife, we now sit on the cusp of the future of personal defense weapons systems.

Laser technology has been around for quite some time, but in terms of destructive power has been pretty much restricted to the military realm.

All of that has now changed, as demonstrated by a young do-it-yourselfer going by the Youtube moniker styropyro who recently built a powerful laser device in his garage.

Dangerous is an understatement for this thing. There’s no, no good reason for anybody to own something this powerful. But because it wasn’t illegal for me to build, I decided to build it anyway.

Though his demonstrations focus his 40 watt laser beam on things like paper, ping pong balls and balloons, the applications are limitless.

For now, building such a personal laser device is completely legal, but don’t expect that to last after lawmakers see how powerful of a weapon it really is. And some, including the builder, are already suggesting that such devices shouldn’t be built by the average layperson:

Just because you can make something at home, doesn’t necessarily mean you should. Today’s example? A laser ‘shotgun’ that uses a lens to combine eight 5W lasers into something that should definitely spice up your next PowerPoint.

The terrifying death machine was built by YouTuber styropyro, who has a long and detailed history of messing around with lasers. This particular rig uses eight 5W lasers, mounted with parallel beams onto a giant heatsink, and powered with a big-ass battery. The result is a fairly legit laser gun, capable of bursting balloons and setting fire to pieces of wood.

While the laser demonstrated in the video utilizes a mere 40 watts of power, a recent military test by the United States Navy utilized a 30,000 Watt laser to take out everything from drones to boats.

But that doesn’t mean such devices, kicked up with some additional wattage, couldn’t be used for personal self defense applications that include the removal of irritating spy drones that may be hovering over your property. Shotguns work, too, but aren’t effective at longer ranges. A laser however, could easily disable such electronic devices, and do so without making a sound.

And, though we don’t have to specifically outline the threats for our readers, such devices may completely change the playing field with respect to personal defense in the event of a serious emergency where law and order as we know it today completely break down.

And that, of course, is the reason we will soon see regulations, and more than likely, criminal penalties for those who build such devices.