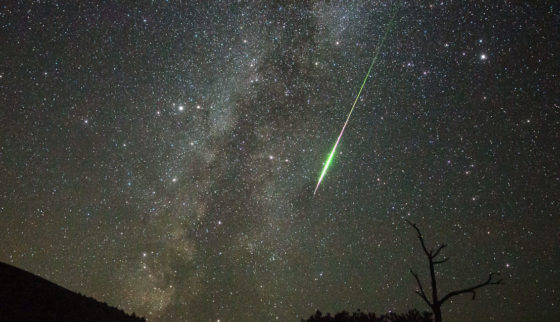 A bright green fireball whizzed through the sky in the Russian city of Novosibirsk in Western Siberia shocking residents. This fireball seems to have baffled social media users and scientists alike.

The flyby was spotted by locals in several areas of the city on Tuesday morning when the sky was still dark and luckily clear. These circumstances made viewing the fireball incredibly effective. Videos showing the green glowing meteor quickly started circulating on Russian social network Vkontakte and on YouTube.

NOTE: The meteor can be difficult to spot. Look to the left of the row of street lights that appear toward the middle of the screen near the median.

According to a report by RT, scientists say it was likely a bolide – an extremely bright meteor that explodes in the Earth’s atmosphere and has an iconic dazzling tail. Nonetheless, the planetarium has asked all locals with any visual evidence, such as photographs or videos, to send them in to help nail down exactly what happened.

This bolide (seen in the video above) is believed to have burned in the atmosphere and no traces of space rocks were found on the ground. Dozens of meteors fly over us every year, but most of them go unnoticed. This time Siberia was lucky to see the stunning space object streaking by above.

Astronomers have been somewhat bewildered by the appearance of this particular phenomenon because there are currently no active meteor showers. “It can be either the tail of a [Leonid] meteor shower or a lone meteor, we need to find out,” deputy director of local planetarium told Komsomolskaya Pravda, a Russian media source.