Watch: College Students Thrilled About Socialism, But They Can’t Actually Define It 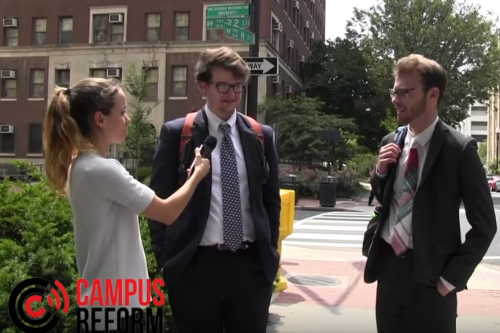 In a stark contrast to previous generations, polls have repeatedly shown that people under age 30 tend to support socialism, and eschew capitalism. As for why that is, the likes Huffington Post will tell you that it’s because young people have seen how their parent’s generation was burned by capitalist greed during the crash of 2008, and that they didn’t grew up during the Cold War, in a society that had deep-seated fears of the Soviet Union. However, there is a far simpler explanation for why young people love socialism. It’s because they don’t actually know what it means.

That’s what Campus Reform proved when they interviewed several college students in Washington DC. It turns out that these people will sing praises for socialism, but can’t define its basic tenets.

Socialism is more of a meaningless buzzword that they’ve repeatedly heard, which they associate with equality and social justice. But they couldn’t tell you what it means if they’re lives depended on it.

That same survey found that 64% of Millennials support the free market, and 32% prefer an economy that is managed by the government. But when asked about capitalism and socialism, 52% supported the former and 42% supported the latter. Clearly, a huge chunk of our young population supports something that they know nothing about. That was confirmed by a poll taken in 2010, which found that only 16% of Millenials could actually define socialism.

This of course is dangerous. People who actually know what socialism is, what it entails, and what it leads to, rarely support it. What can really destroy a society, is a large population of people who support socialism, but only have a surface level knowledge of what it is. They’re driven by emotions rather than logic and facts, and they’re the ones who usually wind up ushering in government tyranny.

“Socialism Has Produced Some Very Powerful Millionaires”: As Venezuelans Starve In The Streets, The Elites Party On

[WATCH] Illinois Economic Collapse Is Near, Two Other States Will Follow In It’s Footsteps