Watch: Bernie Sanders Disqualifies Nominee Over His Christian Beliefs In Violation Of The Constitution 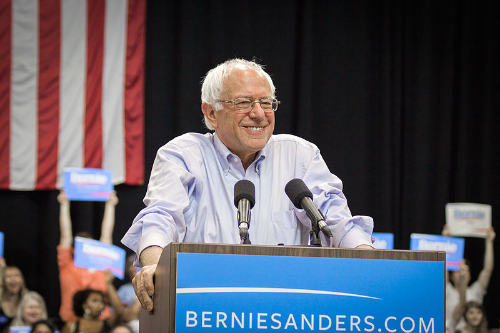 Leftists act like they are so tolerant of everyone regardless of race, color, or creed, but it’s often the case that just beneath the surface of their lofty rhetoric, is a deep disdain for certain groups. This is especially true when it comes to religion. If you criticize Islam for instance, they’ll hound you relentlessly for being intolerant, and in the same breath they’ll characterize all Christians as hateful and oppressive. In their minds, Islam must always get a pass, while Christianity must be suppressed at every turn.

Bernie Sanders is certainly guilty of this kind of hypocrisy. During a recent Senate hearing Sanders hounded Russel Vought, President Trump’s nominee for the Office of Management and Budget. But Sanders’ criticism had nothing to do with Vought’s political or economic opinions. Instead, he made the bizarre decision to attack Vought’s Christian faith, and his belief that only Christians can go to heaven.

Specifically, Sanders attacked Vought for a statement he made on a Conservative blog that read: “This is the fundamental problem. Muslims do not simply have a deficient theology. They do not know God because they have rejected Jesus Christ his Son, and they stand condemned.”

Vought responded by saying “I’m a Christian, and I believe in a Christian set of principles based on my faith. That post was to defend my alma mater, Wheaton College, a Christian school that has a statement of faith that includes the centrality of Jesus Christ for salvation.”

So in other words, Vought took a stance that has been shared by countless Christians for thousands of years. But Sanders was relentless. He continued to ask Vought if he thought people like Muslims and Jews are “condemned.”

Of course, this line of questioning is totally irrelevant. Millions of Christians believe that people of other faiths and denominations are going to hell, and in most cases that doesn’t stop them from politely interacting with these people, and treating them with decency.

Most Christians believe that it’s God’s job to judge people of other faiths after they die. But while they’re here, they are just regular people who are beholden only to the laws and common decency of man. Vought echoed that sentiment when he told Sanders “I believe that all individuals are made in the image of God and are worthy of dignity and respect regardless of their religious beliefs, I believe that as a christian that is how I should treat all individuals.” So there shouldn’t be any reason to believe that Vought couldn’t serve all Americans at the Office of Management and Budget, regardless of their religious beliefs.

But that wasn’t enough for Sanders. In response, he voted against Vought’s confirmation, and all because he wouldn’t deny a basic Christian belief that has no bearing on his nomination. “I would simply say Mr. Chairman, that this nominee is really not someone who is what this country is supposed to be about.”

And by doing that, he may have violated the Constitution. Both liberal and conservative observers have criticized the line of questioning, because it acted as a religious litmus test. He voted against Vought’s confirmation because of his religious beliefs, which goes against Section 3, Article VI of the Constitution. That section reads:

“But no religious test shall ever be required as a qualification to any office or public trust under the United States.”

And to think someone so ignorant of the Constitution, and so disrespectful towards Christians, came very close to winning the presidency.