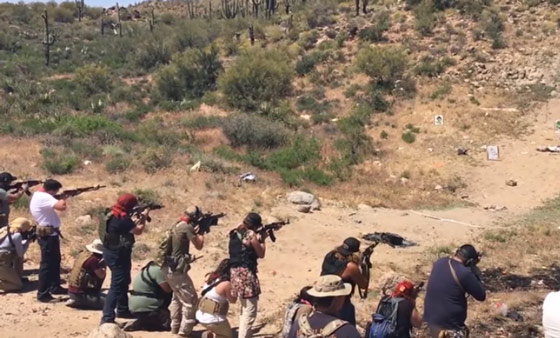 Following the Berkeley protests last month, where numerous Anti-Fa(scist) activists complained of getting a beatdown after they attempted to intimidate peacefully assembling Trump supporters, we learned that the left-leaning organizations are taking their organization efforts to the next level. Among other things, they have called for more combat training, better equipment, and even guns in an effort to scare those who disagree with their message of forced tolerance, equal rights and inclusion.

Today, we get a better look at what that means, with somewhat hilarious results.

Poorly-regulated militias, it seems, are good for only one thing: laughs.

In case you missed our previous reportage on the Phoenix John Brown Gun Club, it’s a “militia” made up of Arizona liberals who conspicuously rediscovered the Second Amendment right about the time that Donald Trump had become the clear front-runner for the Republican nomination.

This militia, in case you hadn’t noticed, is named after abolitionist John Brown. For those of you who have gone through Common Core American history and are unfamiliar with the name, he was an insurrectionist who was hanged after an armed rebellion against the Democrat-backed slave owners of the antebellum South. Say what you will about his methods, he was a man of conviction and bravery.

These idiots, meanwhile, are nothing more than cowardly defenders of the modern incarnation of the party Brown died fighting. They back an ideology that has no respect for gun rights, but they’re willing to compromise that in order to intimidate Americans into giving up their freedom of speech and assembly.

Perhaps it’s unsurprising that individuals with such negligible convictions and morals also have such negligible skill at handling a firearm. These dress-up militia members couldn’t hit the side of a Chick-fil-A from 20 feet, though I fear that may not be for lack of trying.

As noted near the end of the video, the Phoenix John Brown Gun Club is:

Curiously and all of a sudden, the left supports the Second Amendment.

With lyrics like “we’re getting organized… you fascists are bound to lose” playing in the background, it doesn’t take that much of a stretch of the imagination to realize that what these people are training for is armed conflict.

Just last week a family friendly Rose Parade was cancelled in Portland, Oregon after AntiFa groups threatened to violently attack parade goers, including children who would have attended.

Make no mistake: These people want war. They want blood. And anyone who doesn’t subscribe to their special brand of crazy will be a target.

Portland Rose Parade Cancelled Amid THREATS OF VIOLENCE From Anti-Fascists: “You Have Seen How Much Power We Have… Police Can’t Stop Us”