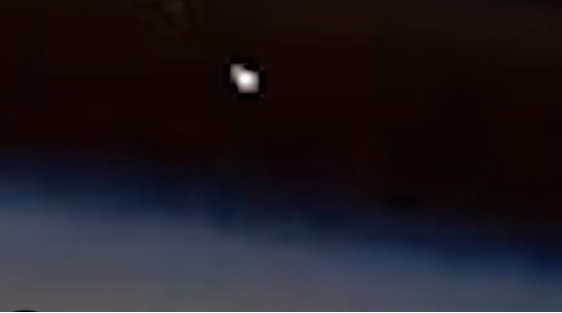 What some believe to be a UFO was spotted by an Italian astronaut from the International Space Station. While many say the video is nothing more than space debris falling to Earth as a meteor, several others are unconvinced after watching the same video.

The object can be seen entering Earth’s atmosphere at an alarming speed. Although the footage of the most recent sighting came from NASA, conspiracy theorists are suspicious over how quickly the space agency released the video and an explanation it to the media.

Speaking in a video uploaded to the SecureTeam10 YouTube channel, a narrator can be heard saying: “I don’t think it’s a meteorite at all.”

What many people may not realize, according to SecureTeam10, is that this video is a timelapse. “You’re seeing the earth spinning at a high rate of speed and we see this flash of light coming from space. It does look to be moving at 85mph (136 km/ph). But when you account how fast the earth would have actually been moving, had this not been sped up, it would have been moving much, much slower,” says the narrator of the video.

To back up his claims, the narrator of Secure Team 10 video compares this “meteor” to another still photograph of another meteorite that fell to Earth during the 2011 Perseid meteor shower.

Here is the original video released by NASA and uploaded by The Daily Mail.  It certainly looks like this video is sped up quite a bit, verifying that SecureTeam 10 was correct about that at the very least.

NASA has once again been accused of covering up the existence of alien life. Despite assurances from the space agency that it is just a meteor, conspiracy theorists remain convinced that it is evidence of extraterrestrials. Of course, it’s likely we won’t know the real truth in the near future.