Video: Financial Analyst: “We Are Very, Very Close To A Major Event Here” 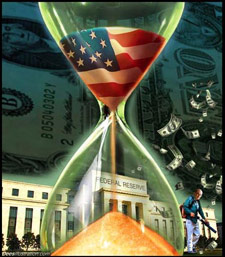 For those paying attention to the global economy and the geo-political environment it’s hard not to see that something very serious is going on.

Russia is currently involved in one of the largest militarization efforts in world history. With economic sanctions from the West now collapsing their economy it is, as many have suggested, only a matter of time before the regionalized conflicts in Europe and the Middle East go global. Resources, namely oil, are now being used as a weapon with prices having dropped precipitously over the last twelve months.

In the United States central bankers have printed trillions of dollars in an effort to keep the economy afloat. But the latest retail numbers suggest that the American consumer may be tapped out. Moreover, the purported economic recovery is quickly being revealed for the sham that it is as home sales across the United States have once again turned down and tens of millions of Americans remain jobless and dependent on government assistance just to survive.

As financial analyst Greg Mannarino notes in his interview with Greg Hunter’s USA Watchdog, the United States is desperately trying to prop up the economy with propaganda and machinations that include, among other things, the latest immigration amnesty orders issued by President Obama. If Mannarino is right, then we may well be approaching a calamity unlike anything the world has ever experienced.

It’s clear to me what the central banks are doing means they are absolutely desperate right now. That also means that we are very, very close to a major event here.

I don’t believe we’ve seen the actual end here because the central banks . . . are going to do things we can’t even conceive yet.  They are going to pull surprises that are going to shock people, and one of them is what Obama just did with regard to the immigration reform.  This is a dollar propping up mechanism.  That’s all it is.

People need to understand . . . this comes back to the debt based economic model.  This mechanism absolutely requires they come up with more and more reasons to borrow cash into the system. It is a debt based economic model. . . . It all goes back to the premise that it can’t stop. This whole mechanism of borrowing cash into existence is so dastardly and so pervasive . . . once this comes down . . . once this debt bubble bursts . . . we are going to see a loss of life.

This hyper inflated debt issue has allowed an alternative universe that has carried the human race with it.  It will create an environment where resources, at some point, will become scarce, and it is going to wipe out a large portion of the human race when the debt bubble bursts.  This is why we are seeing this desperation and the twisting of everything from the manipulation of metals to the manipulation of currencies.  The central banks are going to do everything they can to prop this up.   This is what this immigration thing is about, just like the expansion of wars.

It’s going to get much worse.

There should be no question regarding the fiscal, economic and monetary disaster that America has become.

We’re not just talking about another recession or a 30’s style depression here. When the debt-based system upon which the entire global economic system depends finally falls apart the shockwave will be violent and it will be felt everywhere. No nation will be immune.

For those who have failed to prepare a contingency plan, the events that follow will be devastating. As Mannarino notes, everything is built upon this debt, including our access to resources like oil and food.

When the country of Greece collapsed we got a taste of what this might look like on a macro scale. It was so severe that not only did a large portion of the population lose access to their income when their jobs were wiped out, but confidence in the debt-dependent economy was completely lost. Because no one had an money and no more money could be borrowed, the country literally lost access to everything from medicines and food, to the ability to even keep the electricity on.

Things quickly descended into pandemonium as people fought for food and many were forced to depend on black markets to get by.

Now imagine such an event on a global scale. Greece was bailed out by the EU and the United States. But what happens when it is these countries that are hit with a similar collapse? Who will bail us out?

The answer is no one.

A global catastrophe is coming and it is going to be massive. Now is the time to prepare for it by investing some of your available means into assets that will retain their value when it happens. This means physical goods like gold and silver to engage in trade, foods with a long-term shelf life, labor and trade skills, and other supplies that will replace the worthless consumer goods we believe to be important today.

It’s coming. The time to get ready for it was yesterday.