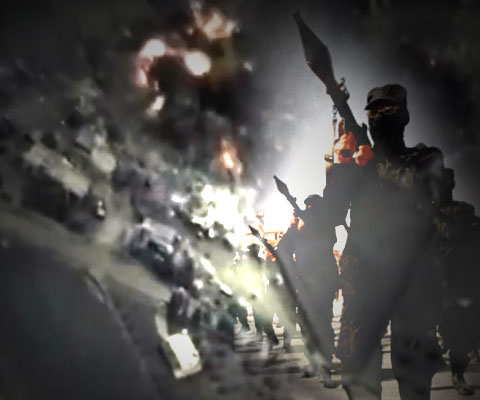 This article was written by Tony Cartalucci and originally published at New Eastern Outlook.

Editor’s Comment: What is happening with Putin right now is dramatic – after fourteen years of spreading fear about al Qaeda, and more recently ISIS, the United States has done little to slow or stop the groups. To the contrary, it is has created more terrorists than ever – not only from those who are displaced, become angry and take up arms against us (blowback), but through the deliberate funding and training of mercenaries who aid with U.S. objectives in overthrowing disliked regimes, and also by creating an enemy force that drives further war and intervention in the region.

Though it is obvious, few bother to point out that ISIS is a paper tiger – it feeds off the fear of dramatic, exploitative killings, and military equipment and personal readily supplied by the West. Putin’s actions are provocative, but where is he wrong? American mis-leaders having been asking for someone to call them out on their gross empire of lies on the global stage for a long time now…

US Complains As Russia Bombs its Terrorists

The New York Times in its recent article, “Russians Strike Targets in Syria, but Not ISIS Areas,” attempts to frame Russia’s recent actions in Syria as dishonest and dangerous. It reports:

Russian aircraft carried out a bombing attack against Syrian opposition fighters on Wednesday, including at least one group trained by the C.I.A., eliciting angry protests from American officials and plunging the complex sectarian war there into dangerous new territory.

This of course would only make Russia’s actions dishonest or dangerous if groups trained by the US CIA were in fact the “moderates” the US claims they are. However, they are not, and thus Russia’s actions are duly justified as is the expansion of their current policy.

There Are no Moderates, and There Never Were

For months now, after years of headlines confirming the US has been covertly arming militants in Syria for the purpose of overthrowing the government in Damascus, a narrative revolving around tens of thousands of these militants “defecting” to Al Nusra and the so-called “Islamic State” (ISIS/ISIL) has been peddled to the public by the Western media and US politicians to account for the apparent failure of America’s alleged policy of creating an army of “moderates” to both fight ISIS/Al Qaeda and the Syrian government.

In reality, from the beginning, there were never any moderates. Starting as early as 2007, years before the war in Syria began, the US as a matter of policy had long since decided to intentionally fund and support the Syrian Muslim Brotherhood – for all intents and purposes the political wing of Al Qaeda – and begin arming militants affiliated with Al Qaeda itself.

This was revealed in Pulitzer Prize-winning journalist Seymour Hersh’s 2007 New Yorker article titled, “The Redirection Is the Administration’s new policy benefitting our enemies in the war on terrorism?,” which stated explicitly (emphasis added):

To undermine Iran, which is predominantly Shiite, the Bush Administration has decided, in effect, to reconfigure its priorities in the Middle East. In Lebanon, the Administration has cooperated with Saudi Arabia’s government, which is Sunni, in clandestine operations that are intended to weaken Hezbollah, the Shiite organization that is backed by Iran. The U.S. has also taken part in clandestine operations aimed at Iran and its ally Syria. A by-product of these activities has been the bolstering of Sunni extremist groups that espouse a militant vision of Islam and are hostile to America and sympathetic to Al Qaeda.

Hersh’s prophetic 9-page report would also reveal that even then, the extremist Syrian Muslim Brotherhood was already receiving funding and support from the United States via Saudi Arabia.  His report revealed (emphasis added):

There is evidence that the Administration’s redirection strategy has already benefitted the Brotherhood. The Syrian National Salvation Front is a coalition of opposition groups whose principal members are a faction led by Abdul Halim Khaddam, a former Syrian Vice-President who defected in 2005, and the Brotherhood. A former high-ranking C.I.A. officer told me, “The Americans have provided both political and financial support. The Saudis are taking the lead with financial support, but there is American involvement.” He said that Khaddam, who now lives in Paris, was getting money from Saudi Arabia, with the knowledge of the White House. (In 2005, a delegation of the Front’s members met with officials from the National Security Council, according to press reports.) A former White House official told me that the Saudis had provided members of the Front with travel documents.

By 2011, Al Qaeda’s affiliates in Syria, most notably the Al Nusra Front, began operating nation-wide, taking the lead in the US-backed fight against Damascus. By 2012, when the US State Department listed Al Nusra as a foreign terrorist organization, it was clear even then, that the largest contingent of anti-government forces on the battlefield was Al Qaeda.

The US State Department’s official statement regarding Al Nusra reported that:

It is clear that Al Qaeda was not only involved in the conflict since its beginning, but also led it. This betrays current US rhetoric that Al Qaeda had only entered the fight later on, seizing on the chaos created by “moderates” and their fight with Damascus. It is clear that it was Al Qaeda itself that drove that chaos from the beginning, and is still driving this chaos to this day.

To explain how America’s fictional “moderate” army has been displaced on the battlefield in Syria by Al Qaeda and ISIS, the US claims that its multi-billion dollar nearly 5-year operation has suffered from massive defections.

The Guardian would report in its article, “Free Syrian Army rebels defect to Islamist group Jabhat al-Nusra,” that:

Syria’s main armed opposition group, the Free Syrian Army (FSA), is losing fighters and capabilities to Jabhat al-Nusra, an Islamist organisation with links to al-Qaida that is emerging as the best-equipped, financed and motivated force fighting Bashar al-Assad’s regime.

The International Business Times would report in its article, “Four Years Later, The Free Syrian Army Has Collapsed,” that:

The Nusra Front, aka Jabhat al-Nusra, has picked up thousands of men who once fought under the umbrella of the FSA during the past three years. It offers its soldiers hundreds of dollars a month in salary and food installments. The soldiers in the FSA did not receive any monthly stipend. When extremist groups such as the Nusra Front gained ground in Syria and received millions of dollars in cash and weapons from wealthy businessmen in the Gulf states and Libya, the moderate rebels “had no other choice,” Jarrah said. “They feel like they are cheated, so they join ISIS.”

The Syrian rebel group Harakat al-Hazm, one of the White House’s most trusted militias fighting President Bashar al-Assad, collapsed Sunday, with activists posting a statement online from frontline commanders saying they are disbanding their units and folding them into brigades aligned with a larger Islamist insurgent alliance distrusted by Washington.

Harakat al-Hazm would take with them to Al Qaeda and ISIS, millions of dollars worth of sophisticated US weapons, including US-made anti-tank TOW missiles.

The most recent US supported group,  the fabled “Division 30,” has also allegedly defected to Al Qaeda – assuming they weren’t Al Qaeda militants from the beginning. The Telegraph in its article, “US-trained Division 30 rebels ‘betray US and hand weapons over to al-Qaeda’s affiliate in Syria’,” reported that:

Pentagon-trained rebels in Syria are reported to have betrayed their American backers and handed their weapons over to al-Qaeda in Syria immediately after re-entering the country.

Fighters with Division 30, the “moderate” rebel division favoured by the United States, surrendered to the al-Qaeda-affiliated Jabhat al-Nusra, a raft of sources claimed on Monday night.

What this news, admitted to by the West itself, of these US-backed “moderates” joining Al Qaeda’s ranks by the thousands proves is that at the very least America’s policy of building up a moderate opposition has failed entirely. What documented evidence stretching back as far as 2007 proves is that the US had no intention of building up a moderate opposition in the first place, and news of “defections” are simply cover for the direct funding and arming of Al Qaeda and ISIS in Syria.

At the very least, Russia bombing these groups either having already defected to Al Qaeda, or inevitably going to defect to Al Qaeda, is doing the Pentagon a favor.

This leads back to the most recent New York Times article. Russia is not arbitrarily bombing “moderates” backed by the US in Syria to stave off allegedly “legitimate” opposition to the government in Damascus – Russia is bombing terrorists who are either operating under the banner of Al Qaeda but are portrayed as otherwise by the US, or will inevitably end up turning their fighters and weapons over to Al Qaeda. Russia is bombing Al Qaeda.

“By supporting Assad and seemingly taking on everybody fighting Assad,” Defense Secretary Ashton B. Carter said Wednesday, Russia is “taking on the whole rest of the country that’s fighting Assad.” Some of those groups, he added, are supported by the United States and need to be part of a political resolution in Syria.

That it has intentionally allowed ISIS supplies to flow out from under the nose of its allies and its own military forces stationed both in Jordan and in Turkey, indicates the the US at the very least is tacitly perpetuating the existence of ISIS – but most likely is actively involved in filling the trucks bound for ISIS in Syria as well.

US Secretary of Defense Ashton Carter claims that the Russian position is “doomed,” in what appears to be a pledge by the United States to resist Moscow’s attempts to stamp out Al Qaeda groups in addition to taking on and eliminating ISIS.

Some might consider doubling down on a policy of backing terrorists that will inevitably be revealed to the world, and a policy that has thus far failed to topple the Syrian government which is now being bolstered by Russian, Iranian, and possibly Chinese forces, is a policy that is ultimately doomed.

And finally, it must be noted, for those still doubting ISIS is in fact an intentional creation of US foreign policy, that ISIS is now fighting the combined military forces of Syria, Hezbollah, Iran, Iraq, and now Russia. One must ask themselves who has the material resources, finances, and operational capacity to support a single army capable of taking on a multinational coalition of this size. Where, if not from the US and its regional allies, is ISIS deriving the source of its fighting capacity?

Claiming to fight ISIS, while so transparently supporting them, is indeed a doomed position, one doomed to fail today, and one doomed to eternal condemnation in the future.