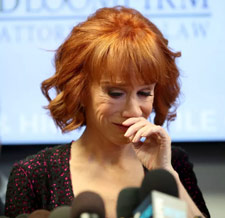 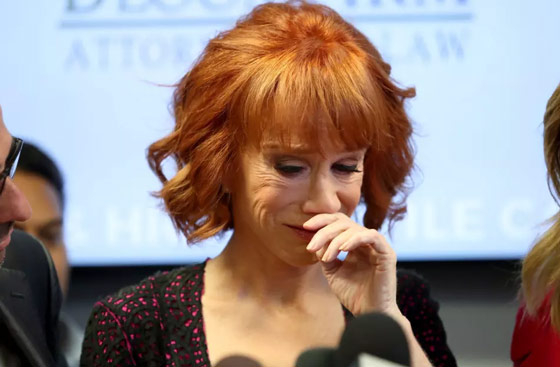 Following her recent photo and video shoot involving a severed and bloodied head of President Donald Trump, Griffin took a lot of heat from both left and right. And while we fully support Griffin’s right to free speech, however gruesome, hateful or misdirected, the consequences for her artistic expression continue to play out in epic form.

Though she tried to side-step and place blame for the national blowback squarely on the shoulders of Donald Trump, the American public was having none of it.

Now, just one week after her “art” went viral across the internet to the outrage of millions of people, we learn that Griffin, who was already struggling to fill comedy shows and obtain sponsors, has been shunned by everyone she is financially involved with:

So, that’s everyone. CNN (after waiting nearly a day) decided to can Griffin from her annual New Year’s Eve appearance (where she flips people the bird and makes Anderson Cooper giggle like a school girl). And every single one of her upcoming gigs for her comedy show has been canceled. Every. Single. One.

“Kathy Griffin’s Celebrity Run-Ins Tour” (hilarious!) had planned seven stops, a few in California, a few more around New York City, and one in New Mexico.

So, Griffin’s metamorphosis is complete. She went from a D-list comedian with one sponsor who hardly ever works (seven shows between now and December is not exactly a packed schedule) to a former comedian with no sponsors and zero upcoming shows.

Via The Daily Wire

As Top Right News so succinctly sums up:

Brutal. But well deserved. Kathy has no one to blame but herself.

That’s the free market at work.

We should never take pleasure in seeing someone lose their job but companies have a right to determine whether or not they want to stand behind disgraceful behavior like that.

We have no doubt that Griffin will continue to blame the President, the racist alternative media, those pesky Deplorables, and especially 11-year old Barron Trump for her financial woes.