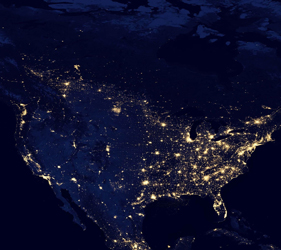 Editor’s Note: As Jeremiah Johnson notes in his latest analysis, North Korea poses a real and present danger to the United States. It’s a threat that most Americans discount as implausible, but as you’ll see below, our defenses are pretty much ineffective should North Korea decide to utilize a satellite-launched Electro-Magnetic Pulse weapon deployed above the continental United States. It’s a low probability event to be sure, but a realistic possibility nonetheless and one that world affairs analyst Joel Skousen has often cited as a potential catalyst for World War III. “The trigger event has to be North Korea… North Korea is the most rogue element in the world and yet it’s been given a pass by the U.S,” Skousen has warned. As you read the following, keep in mind that North Korea’s leader Kim Jung Un, probably insane in his own right, would more than likely not be acting alone in such a scenario, as he is beholden to his Chinese neighbors. And as we’ve oft cited, it is only a matter of time before East and West clash over resources and economic hegemony. A war is coming and it could well be that North Korea is positioning their military assets for the coming conflict.

Now that the North Korean missile launch is “over,” most would assume there is no cause for concern.  That assumption is incorrect, because Kim Jung-Un has already declared there will be more missiles launched.  Rice, the U.S. National Security Advisor has already stated that the Koreans did indeed launch using an ICBM.  The very first thing we can do is present an excellent site that tracks satellites, their trajectories, orbits, and other useful data.

The site can be found here:  www.n2yo.com/?S=39026.  Be advised, that last number at the end of the site stands for the “Kwangmyong-3 satellite,” and by looking for this satellite (in orbit, as can be seen) I found the site.

This newest launch of 2/7/16 can be found by searching www.n2yo.com/?S=41322.  Take note the 5-digit number on the end of the website address is the NORAD identification number for the satellite; in this case, the satellite is KMS-4.

As you will find, the satellite travels at a speed of 4.73 miles per second, with an altitude of 508 km/315 miles above the earth.  The satellite period (the time it takes for a complete orbit) is 95 minutes.

Regarding the actual launch itself, the UN has convened an emergency UN Security Council meeting to discuss this event.  One of the most significant items was reported by the Washington Post on launch day:

“The rocket went missing from South Korean military radar in the sea near Jeju Island at 9:36 a.m., said defense ministry spokesman Moon Sang-gyun, but the Japanese government said that it passed over the southern islands of Okinawa at about 9:41 a.m. There were no reports of any debris falling on land.”

Basically this translates into a lapse of 5 minutes where the Korean missile vanished from the South Korean radar screens…radar supplied to them by the United States Military.  Interesting, when there is also the possibility that stealth technology may have enabled this.  Five minutes is a very long time.  There is more to ponder in all of this.

Do you see that underlined portion?  That “advanced” missile system failed several times when tested in Hawaii with “happy birthday” scenarios: preprogrammed coordinates for the test missile and its trajectory prior to the test.  It failed miserably.

In addition, read on from this AP report quote:

So it’s the Aegis system, an American-designed anti-missile system, yet the press places emphasis on South Korea.  They stated “disappeared from South Korean radars” to mislead readers into thinking it’s just a “South Korean quirk,” not attributing the disappearance to a “glitch” in a multibillion-dollar U.S. government-sponsored U.S. missile defense system.  Imperial hubris protected by the Potemkin press.

You don’t just “lose” a missile for five minutes, especially with a multibillion dollar tracking system.

North Korea now currently has 2 satellites in orbit.  With the additional thrust by this current launch, it is obvious that the KMS-4 satellite can be substantially larger than the KMS 3 satellite that also orbits the earth.  All of the satellites are orbiting at the altitude detailed earlier, which is an optimal height for the detonation of an EMP weapon.  The satellites pass over the continental United States not once but multiple times during the course of the day.

I found an additional article entitled Suspect Super-EMP Orbit Over United States, dated April 8, 2013, by Ken Jorgustin that explains in detail the parameters of the KMS-3 satellites.   If you recall I cited Dr. Peter V. Pry in the last article on the North Korean EMP threat, and Dr. Pry also wrote the following:

He also added that one of the things North Korea is counting on is the complacency caused by multiple satellite launches.  Dr. Pry wrote the following:

“Miniaturization to develop a nuclear warhead is not difficult to do, and can be accomplished even without nuclear testing.”; “North Korea and Iran both have strategic reasons to mislead and conceal from the West the true status of their nuclear and missile programs. They intend that the U.S. and its allies will underestimate those programs, fail to act in time to stop them, and be strategically surprised when North Korea and Iran become nuclear super-powers,”

After a while, the nations will become “deadened” to any sense of urgency that a missile launch may cause, and this will lead to complacency that will enable North Korea to catch us off balance.  North Korea wants the U.S. to underestimate them; in addition, they are receiving help from Iran, China, and Russia to further develop their capabilities.  The National Intelligence Service (NIS) believes that the rocket’s payload satellite was roughly 200 kg (450 lbs.), about twice the payload of the KMS-3 satellite launched in 2012.

Back in 2011, Lt. General Ron Burgess, the Director of the Defense Intelligence Agency testified before the Senate Armed Services Committee that North Korea had successfully and fully weaponized its warheads for use on ballistic missiles.  This was after it had been released back in 2008 that North Korea had successfully miniaturized their nukes to be able to deliver them by missile.

The launch window was changed from 8-25 February to 7-14 February, and mere minutes after the new window’s commencement date, they successfully launched.  They now have 9 days to track the satellite and balance its orbit, until 16 February, the birthday of the deceased Kim Jung-Il, the father of the current dictator.  It’s not over until it’s over, and what better present is there for Kim Jung-Un to give his father than an EMP over the United States?  To discount such would be disdainful, at best, and we cannot afford to eliminate this as a possibility, as the satellite, if so equipped, can deliver an EMP anytime Un wishes.  All comments and discussions are welcomed, and I invite you to share your thoughts on the possibilities and what you believe is probable in the long and short-term of things.