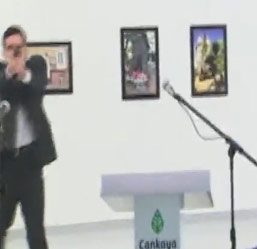 The assassination comes just days before Russia was set to host a meeting on the Syrian crisis with Turkish officials.

The assassination and aftermath were captured on camera, with video showing Mr Karlov speaking at a podium before falling to the floor as gunshots were heard.

Photos showed the attacker, wearing a black suit and tie, standing behind Mr Karlov with his hands clasped before pulling out a handgun in his right hand and opening fire.

The gunman extended his right arm and pointed the gun at Mr Karlov, and then gestured with his left index finger pointed into the air after shooting the ambassador multiple times.

The shooting of Andrei Karlov could further destabilize relations in the region.

Russia is no doubt on war footing as it investigates the incident.