Unbelievable: 4-Year-Old Gets Suspended for Bringing Empty .22 Casing to Preschool 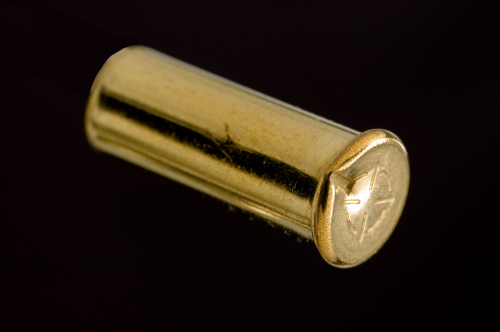 The American school system has long abandoned its job of teaching the young. It’s not an exaggeration to say that our schools are little more than indoctrination centers. They don’t really prepare our children for the world. They just teach them to be scared, dependent, and to disregard any traditional value. And god forbid one of your boys does something even remotely masculine outside of a physical education class or a football field. In most schools, boys are treated far more harshly than girls are for their bad behaviour.

And that may explain what happened to Hunter Jackson, a 4-year-old from Collinsville, Illinois who was attending preschool. During a visit with his grandpa, he picked up an empty .22 casing in a field and took it home with him. But when he took it to school to show his friends, all hell broke lose. The boy’s mother explained what happened in a Facebook post, which has since gone viral:

Today, I picked up my happy little 4 yr old from preschool, at A Place to Grow, in Troy. My arrival was met with a stone faced teacher, who told me that Hunter brought a “shotgun bullet” to school.

? I was horrified. My kid? Who just spent the weekend learning gun safety?

Well….when I was escorted to the office for a sit down. I was handed a tiny .22 empty brass casing. Not a “shotgun bullet”. He found it on the ground, expelled from a 22 Rifle over the weekend, while Hunter was target practicing with his Police Officer Grandpa. He was so excited, and snuck it to school to show his friends. We had no idea about it.

I was handed a piece of paper. No words, just eyebrows raised in disgust at my son, explaining that his behavior warranted a 7 school day suspension. Which I still was expected to pay tuition for, of course. And a threat that if his enthusiasm for guns continued, he’d be permanently expelled…

This wasn’t the first time that Hunter had gotten in trouble for something like this. Apparently he’s been warned before about turning toys into make-believe guns, which as we all know is pretty normal behaviour for little boys. That normal behaviour contributed to the school’s decision to suspend him.

Think about how absurd this whole thing is. I didn’t even know that 4-year-old kids could get suspended. That seems like a punishment you give to older kids who actually have the mental capacity to plot and be malicious. It’s for kids that have a much firmer grasp of right and wrong, and what the rules are.

How can a 4-year-old kid understand that he’s done something wrong in this instance? He didn’t hurt anyone or threaten anyone, nor did he put anyone in danger. He did something that’s completely innocent, and received a punishment that’s normally reserved for kids who actually hurt and threaten their peers. What does that teach him?

Nothing, according to his mother, who had this to say when she was interviewed by the news:

“[Hunter] just was wandering around in a field and picked up and put it in his pocket and didn’t tell his parents…it’s paranoia.  It’s something that’s become quite an epidemic where guns are automatically assumed that they’re bad…and I’m not sure how a 7-day suspension teaches my son anything about tolerance or anything about why he was wrong.  It just means his school doesn’t want him there because of things he enjoys,”

I think what’s going on here is pretty obvious. It’s one thing for school staff to execute policy that they have no say in, but these teachers were so serious about what this kid did, and they were so ignorant about firearms in general. Clearly they’re biased against firearm ownership, and they’re passing that bias onto very young and impressionable kids.

Like I said, schools aren’t places of learning anymore. They exist to indoctrinate.