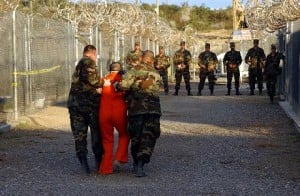 To screams and protests from the American people, Congress overwhelmingly supported passage of the National Defense Authorization Act which, among other things, allowed for the indefinite detention of Americans without charge or trial should they be arrested or held under suspicion of loosely-based definitions for domestic terrorism.

A super-majority 86% of Senators supported the measure, which was signed by President Obama while Americans partied on New Year’s Eve December 31st, 2011.

Now, under pressure from Senator Rand Paul (R-KY), members of Congress have re-assessed their positions on the amendment which allows the government to snatch up American citizens domestically and hold them in similar fashion to Guantanamo Bay detainees.

Senators who likely failed to read the bill before they found out what was in it back in 2011, have made a u-turn on one of its most controversial provisions.

President Barack Obama opposed the measure, but ultimately signed it after an amendment to the act muddied the issue enough to make it debatable in courts. Obama pledged to never use the authority.

Sen. Dianne Feinstein (D-Calif.), who helped write that amendment, declared Wednesday that it is not good enough, and recalled seeing Japanese Americans jailed in horse stalls at a racetrack when she was a girl.

“I believe that the time has come now to end this legal ambiguity, and state clearly, once and for all, that the AUMF or other authorities do not authorize such indefinite detention of Americans apprehended in the U.S.,” Feinstein said.

“The federal government experimented with indefinite detention of U.S. citizens during World War II, a mistake we now recognize as a betrayal of our core values,” she said. “Let’s not repeat it.”

The amendment filed by Feinstein Wednesday would bar such detentions of citizens and green card-holders.

It was not clear when the amendment would get a vote.

Of then ten Senators sponsoring the bill, eight of them voted in support of the legislation in December of 2011, including Sen. Feinstein.

While we are in full support of eliminating the indefinite detention provisions of the NDAA, as well as the ambiguous definitions for what is or is not a domestic terrorist as per the Patriot Act, the NDAA in its current form should never have been passed in the first place.

Is it not the responsibility of our elected officials to prevent ambiguity BEFORE a law is passed, especially when the questions being raised have to do with fundamental Constitutional issues like due process and the right to a fair and speedy trial?

For nearly a full year now, the Congress of the United States essentially granted the President a decree allowing him to utilize broad powers to detain anyone, for any reason, and for as long as he wanted. It was a power that President Obama himself railed against publicly, even pledging to veto the provision, though he ultimately failed to follow through on that pledge.

While President Obama “promised” never to use the provision to detain Americans, the fact is that such power should never be granted to any government, let alone a single individual.