Two Stars Crashed Into Each Other Flinging Out Gold, And Wobbling The Universe 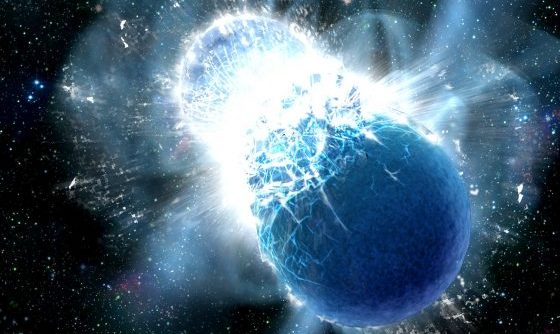 The amazing new discovery of two crashing stars is a giant leap forward for astrophysics. This celestial event has been described by many as one of the most exciting things to happen in space.

According to The Independent, the super-dense neuron stars crashed together 130 million light-years away, spewing out precious metals and other heavy elements like platinum and uranium. Neutron stars, the collapsed remnants of massive stars that have died in supernova explosions, are some of the most exotic objects in the universe Experts say the event has kickstarted a “new chapter in astrophysics” and confirmed theories about the origin of the mysterious neutron stars. They were also able to use telescopes on satellites and the ground to see the light and radiation that was being flung out of the explosion, which is known as a “kilonova.”

“They [neuron stars] are as close as you can get to a black hole without actually being a black hole,” theoretical astrophysicist Tony Piro, of the Observatories of the Carnegie Institution for Science in Pasadena, California, said in a different statement. “Just one teaspoon of a neutron star weighs as much as all the people on Earth combined.”

This huge explosion also rocked the very fabric of the universe, distorting spacetime. That is a major discovery in itself, marking only the fifth time that gravitational waves have been spotted on Earth and for the first time ever, scientists have spotted both gravitational waves and light coming from the same cosmic event Scientists didn’t just “hear” the violent blast by seeing the ripples in spacetime. Every other gravitational wave detection has been traced to black holes crashing together in remote regions of the universe more than a billion light-years away.

Albert Einstein first predicted the existence of gravitational waves in his theory of general relativity, which was published in 1916. But it took a century for astronomers to detect them directly. That milestone came in September 2015, when LIGO saw gravitational waves emitted by two merging black holes. Gravitational waves are ripples in the fabric of space-time generated by the acceleration of massive cosmic objects. These ripples move at the speed of light, but they’re much more penetrating; they don’t get scattered or absorbed the way light does. –Space

On Aug. 17, 2017, LIGO’s two detectors, which are located in Louisiana and Washington state, picked up a signal that lasted about 100 seconds.  That’s far longer than the fraction-of-a-second “chirps” spawned by merging black holes. “It immediately appeared to us the source was likely to be neutron stars, the other coveted source we were hoping to see — and promising the world we would see,” David Shoemaker, a spokesman for the LIGO Scientific Collaboration and a senior research scientist at the Massachusetts Institute of Technology’s Kavli Institute for Astrophysics and Space Research, said in a statement.

The landmark discovery initiates the field of “multimessenger astrophysics,” which promises to reveal exciting new insights about the cosmos, researchers said. The find also provides the first solid evidence that neutron-star smashups are the source of much of the universe’s gold, platinum, and other heavy elements.