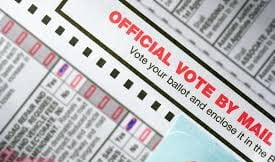 The political theatre is endless. Somehow, Donald Trump has now changed his mind on mail-in ballots, but only in the swing state of Florida. Be ready, this is all a set up for a contested election in November and a disastrous outcome.

If you haven’t figured out the two-party system is a scam yet, you may be surprised to hear Trump switched sides on an issue, but only when it will have the effect of conditioning the masses to be ready for election drama this fall. The president on Tuesday encouraged voters in Florida to vote by mail, first via a tweet and later at his daily coronavirus press conference, according to a report by Market Watch.

“Florida has been working on this for years. They have a very good system for mail-in,” said Trump, when asked by a reporter to explain his seeming change of heart. The president credited two “great” Florida governors, Rick Scott and the current incumbent Ron DeSantis, for building Florida’s current system.

At the same time, though, the president continues his repeated criticism of Nevada’s decision to mail ballots to all voters in the Western swing state. The Democratic governor and Democratic-controlled state legislature approved the plan over the weekend. But this is all part of the larger plan.  Based on models already released, we know the election is going to be interesting, to say the least…

Another Secret Model: A Contested 2020 Election

MSM Frenzy: Trump Floats The Idea Of Delaying The Election

For those paying attention, you are already well aware that the election is nothing more than an illusion of choice. But for those still stuck in the system as clave cogs to the machine of control, there will be a defense of Trump’s wishy-washiness.

The point is, we won’t really have a choice anyway. The Federal Reserve is in control and they will select the puppet. If the election is delayed, it will be because the Federal Reserve wants it to be, and it’ll have little if anything to do with Trump.  He’s just playing his part for the predictive programming and the mainstream media is stirring up the fear again. Have people really not figured this out yet?

However, when the mainstream media goes nuts over anything, we should all be paying attention to their brainwashing and mind-numbing propaganda to alert us to potential future events. –SHTFPlan

This is all a setup and we are being played. The election is nothing more than a selection by the bankers of the world. They will get whatever puppet necessary behind the oval office to complete their agenda, and they are using Trump as a puppet to bring this into reality:

This is gearing us up for a contested election already with predictive programming. Wake up, folks.  The joke is on us. Before waving this away as nothing, remember, the elitists have already modeled this exact scenario:

We live in a world of psychological operations and they are being blasted at us 24/7 since March when COVID-19 and social distancing were all the media could talk about. Trump has also already reused to say he’d accept the outcome of the election if Joe Biden wins. This opens the door for a major event that could possibly spiral into a civil war, but at a bare minimum, will cause social upheaval this November and beyond. And the masses are still falling for it and fighting over which puppet will be chosen by the central banks to rule them. –SHTFplan

Wake up. We are being played. This is all a predictive programming psyop game to those pushing the New World Order. Prepare for social unrest.  They are advertising what they plan to do to us. You have time, make the most of it. If you don’t have 6 months’ worth of food and some lead to protect that food, consider finding some.

Hopefully, you’ve figured out the scam by now. If not, you’re probably still relying on some political messiah to save you from the very system designed to destroy you.