The election chaos is hardly settled after Iowa began to cement the path of the primary and election. In fact, it has officially just gone dirty.

Right or wrong, Trump has undoubtedly upset the apple cart, and the system has clearly been gunning for him. Clearly, they would prefer Cruz, despite his Tea Party credentials, who is married to a Goldman Sachs executive and closer to the interests of the establishment.

The tide has changed for Donald Trump, who is now on the offensive against another candidate for the first time since the debates began.

Perhaps stung by his second place victory, The Donald is going ALL OUT on rival and Iowa caucus victor Ted Cruz, accusing him of cheating, and playing dirty tricks against Ben Carson to steal his caucus supporters.

Ultimately, he has demanded that Cruz be disqualified.

The turmoil is still unfolding with live Twitter updates.

Donald Trump went on the offensive. The Daily Sheeple rounded up these Twitter posts:

Ted Cruz didn’t win Iowa, he stole it. That is why all of the polls were so wrong and why he got far more votes than anticipated. Bad!

During primetime of the Iowa Caucus, Cruz put out a release that @RealBenCarson was quitting the race, and to caucus (or vote) for Cruz.

Many people voted for Cruz over Carson because of this Cruz fraud. Also, Cruz sent out a VOTER VIOLATION certificate to thousands of voters. — Donald J. Trump (@realDonaldTrump) February 3, 2016

The Voter Violation certificate gave poor marks to the unsuspecting voter(grade of F) and told them to clear it up by voting for Cruz. Fraud — Donald J. Trump (@realDonaldTrump) February 3, 2016

Based on the fraud committed by Senator Ted Cruz during the Iowa Caucus, either a new election should take place or Cruz results nullified. — Donald J. Trump (@realDonaldTrump) February 3, 2016

This was sent out from Ted Cruz- as Iowans arrived at their caucus sites to vote. #CruzFraud pic.twitter.com/tRM7KUCrSU — Donald J. Trump (@realDonaldTrump) February 3, 2016

The release falsely promoted the idea that Carson was quitting and urging those who would’ve voted for Carson to vote for Cruz instead: 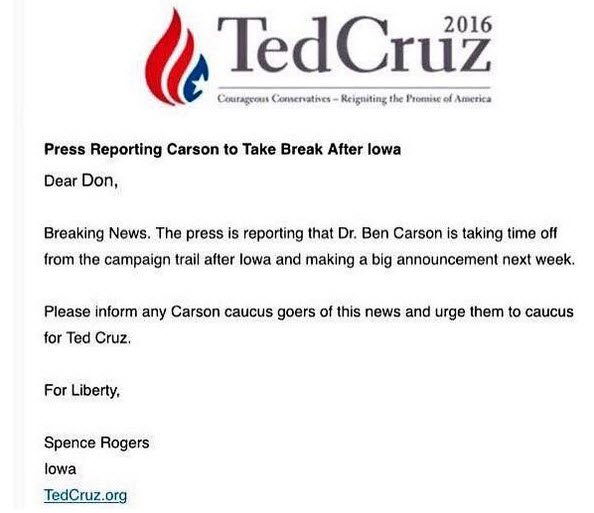 The State of Iowa should disqualify Ted Cruz from the most recent election on the basis that he cheated- a total fraud! — Donald J. Trump (@realDonaldTrump) February 3, 2016

Apparently, Trump is scheduled to take his accusation on the cable news circuit tonight.

For his part, Ben Carson – about whom these lies were allegedly spread – reportedly had this response:

During an appearance on the FOX Business Network’s ‘After the Bell,’ Republican presidential candidate Ben Carson responded to an apology from Ted Cruz, after his campaign allegedly spread false rumors that the retired neurosurgeon was ending his 2016 bid.

“As Christians, of course we accept people’s apologies,” Carson said. “We also have to ask ourselves is this acceptable to us, the American people, or should there be some accountability?”

Carson added: “There should be some consequences for things. You don’t just say ‘oh, okay, sorry… okay let’s move on.’ The damage was done to me, it wasn’t done to them.”

Sarah Palin backed up Trump on his assertions, with a tirade posted on Facebook only hours ago:

Thank heavens Donald Trump opened so many eyes to the lies, corruption and total lack of accountability that come so naturally to the permanent political class. And Sen. Ted Cruz was spot on when he once noted that “millions of Americans are asking for accountability and truth.” Which is why it’s so curious – and saddens us – this lack of accountability with the lies of Cruz’s own campaign.

Cruz’s campaign chairman, U.S. Representative Steve King, is lying, and good for Dr. Ben Carson for calling this out. King, who’s previously asked for and received my endorsement, time and resources to support his own election, is still lying about my altruistic support of Mr. Trump, and he’s refused to provide any evidence to the contrary. And, this U.S. Congressman actually lied to his own constituents on behalf of Cruz, regarding a good man, Dr. Carson. He told voters Carson was dropping out of the Presidential race immediately before the Iowa caucus, causing a relative uproar inside the process, so the word would spread and he could rack up more votes for his candidate, Cruz. That’s a dirty trick. Dr. Carson deserved better. The voters deserved better!

Where is the accountability for these political actions? Very sad; typical Washington tactics. THIS is why “the status quo has got to go.”

Our friend Dr. Carson put it so well:

“As Christians, of course we accept people’s apologies, we also have to ask ourselves is this acceptable to us, the American people, or should there be some accountability? There should be some consequences for things. You don’t just say ‘oh, okay, sorry… okay let’s move on.’ The damage was done to me, it wasn’t done to them.”

We’ve had eight years of a reckless President, accountable to no one, pushing this country to the brink. Why would we ever take a risk repeating that? We are never going to turn this country around if we keep electing “more of the same.” Just like conservatives have been preaching in opposition to Obama’s political tactics for years: actions speak louder than words.

The Cruz Campaign’s actions to destroy a good man’s efforts to serve are no different than Obama’s practice of not holding anyone accountable. Typical politics. Typical politicians.
Here’s background:

Whether or not this will steal back momentum from a gaining Ted Cruz remains to be seen.

But it would appear that the gloves are off, and the election melee is just beginning to get ugly.