Trend Forecaster Predicts Major Breakout For Gold: “Those Spring-loaded To The Upside Could Make A Fortune”

This analysis has been contributed by CrushTheStreet.com.

For more breaking market analysis, free financial reports and suggestions that will help you grow your wealth in uncertain times click here.

A Convergence of Trends are Playing Right Into the Hands of Gold.

Gold just hit a 52-week high, and the confirmation of this bull market trajectory is getting more decisive by the day. This next move up could be a Bitcoin-type surge, and those spring-loaded to the upside could make a fortune.

We are past the point of no return, and the day of reckoning is starting to show its ugly face. Out of control government spending is spiking the official U.S. debt, which is now over $21 trillion, but what is rapidly adding fuel to this fire is the rising interest rates that are wrenching higher: 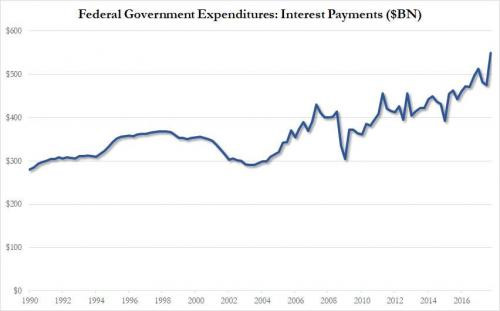 Interest payments just hit an all-time high in the last quarter of 2017, while interest rates were still essentially at historical lows. Just getting back to where the Fed would like to go (3%) would be terminal for the U.S. economy.

Both China and Russia boast about their gold accumulations and refer to gold as a strategic monetary asset while the unbelievable U.S. downplays it and actively manipulates the price downwards while attempting to prop up all other markets. 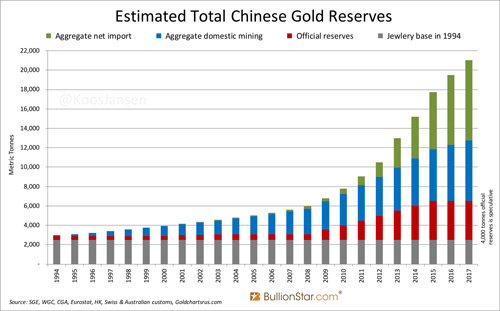 Artificially suppressed gold prices are going to play right into the hands of steadily accumulating investors and countries, like China and Russia, which are rapidly preparing to eject from an empire on the edge of debt ruin.  China is specifically preparing to assume dominance in the global economic sphere, already surpassing the U.S. in purchasing power parity and GDP soon to follow. 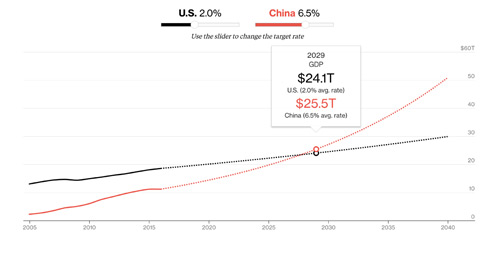 And with the announcement of China’s oil futures contract, the dollar hegemony is at serious risk.

These are among the reasons why Ray Dalio of Bridgewater and legendary investor Jim Rogers have backed the truck up with precious metals, with Jim Rogers going as far as moving himself out to live in Asia, where he sees the brightest future ahead.

These visionaries see what is coming and are not afraid to put their money where their mouth is and act.

On top of macro fundamentals, which strongly favor owning hard assets, we are seeing evidence that supply declines will set in physical gold right when demand is likely to surge, which is why I’m taking a strategic position in this specific gold mining company. Quite frankly, if gold goes up 100%, which is very possible, I expect this top-tier mining company to go up 500-1,000%. 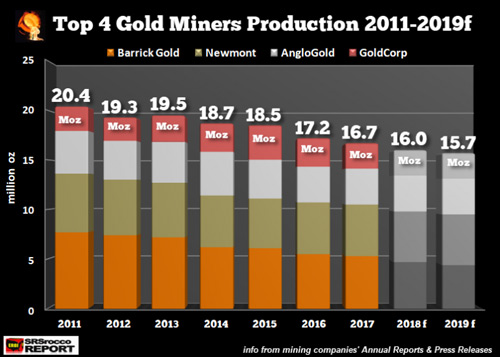 Jeffrey Gundlach, who made $4 billion from the sub-prime crisis, told CNBC this week that he’s expecting a $1,000+ move for gold.

“I suspect when traditional markets pop, investors will seek out thousand-year-old stores of value which could send gold soaring to $10,000 an ounce in a bitcoin like frenzy” – Keith Neumeyer, chairman of First Mining Finance and resource legend.

The combination of markets rolling over, supply shortages, and surging investment demand, along with accelerating gold accumulation from countries such as China and Russia, will pour fuel on the fire. The system is leveraged up, and rising interest rates are a time bomb on the mountain of debt waiting to come crashing down.

My analysis is telling me that we are on the verge of a fierce move higher in gold, and for those of you who have steadily accumulated through the bear market, a massive payoff is coming.

Learn all the details here about how I plan to strap myself in for gold’s next big move!

This analysis has been contributed by CrushTheStreet.com.

For more breaking market analysis, free financial reports and suggestions that will help you grow your wealth in uncertain times click here.