“This Is The Disaster Everyone Will Wish They Prepared For”: SoCal Megaquake Threatens 20 Million 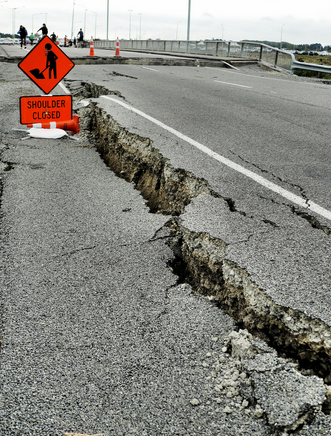 Experts in business and policy have conducted a survey of the potential damage that could be expected after what scientists now say is an inevitable mega-earthquake along the San Andreas fault. It exposed many deep flaws in the system, and forecast a disaster of epic proportions for of Southern California.

Because the pressure has been building for over a century, and simply must be released, the earthquake is not just a potential event, but a liability that is sure strike sooner or later, and models show that the magnitude could easily approach 8.0.

It could easily become every prepper’s worst nightmare – an event big enough to test the shaky resolve of the entire population as they face being cut off from food, water and electricity; even a modestly large earthquake could disrupt pipelines and power lines for water supply, sewage, natural gas and more for several weeks or even months… and it would only take a matter of hours and days for riots and looting to begin.

According to Phys.org, this is the disaster everyone is going to wish they prepared for:

But when the Big One hits, a recent report says, the western state is ill-prepared and local officials as well as major businesses need to face that reality to “prevent the inevitable disaster from becoming a catastrophe.”

Drafted by a group of business and policy leaders, the report identifies several key areas that need to be addressed before a quake as strong as a magnitude 8 happens, notably aging infrastructure, water supplies and the risk of catastrophic fires… including freeways, railway lines, gas and petroleum pipelines as well as electric lines.

A major earthquake on the San Andreas, one of California’s most dangerous faults, would cut most lifelines in and out of southern California, preventing critical aid from reaching some 20 million people and hampering recovery efforts, experts say.

“It is inevitable that we will have a big earthquake because that pressure needs to be released,” said Robert Graves, a seismologist with the USGS.

For society to come unglued at the seams and spill over into pure chaos is hardly impossible in the sprawling, superficial and highly unstable cultural combustion engine that is Los Angeles, where gangs and clashing ethnic groups will be pitted against a shallow and ill-prepared general public with no grip on reality.

Just imagine how that will play out when 10-20 million people are deprived of water sources, fuel and food:

Computer simulations by the US Geological Survey (USGS) suggest that a magnitude 7.8 quake on the southern end of the San Andreas fault would cause shaking for some two minutes, killing at least 1,800 people, injuring 53,000 and causing $213 billion in damage.

“Most of the water that we get has to cross the fault to reach us but when the earthquake happens, all of the aqueducts will be broken at the same time,” Jones, known as California’s “earthquake lady,” told AFP.

Installing automatic shutoff valves on natural gas and petroleum gas pipelines that run near the San Andreas Fault could also help prevent major fires [because otherwise they would be widespread; either way the source of fuel and heat will be cut off].

As for maintaining communication with the outside world once the Big One strikes and disrupts energy grids, Jones said solar power could be one answer.

There are many ways to prepare for what is coming to Southern California, and may well occur in other key parts of the country.

Experts admit that services could be disrupted for several months, so serious preppers living in earthquake zones should be certain that there is a minimum 2-3 month food supply for everyone in the home, as well as 30-60 days of water, along with other typical supplies.

Tess Pennington put out a comprehensive guide to prepping for a major earthquake, including common sense tips about avoiding placing heavy objects on shelves and high places that could collapse in your home during a seismic event, as well as information about evacuation, route planning, and of course, prepping an emergency supply of food, water, medicine, supplies and backup sources of fuel and electric power:

The danger isn’t over when the shaking stops. There are many hazards that still exist. You must quickly survey the safety of your environment.

In some events, you’ll have to leave your home due to damage caused by the earthquake.

If you have to evacuate, having a 72 hour kit or bug out bag ready to go will expedite the process of leaving.  Your bag should contain all items necessary to survive for 3 days.  When preparing a bag keep the main survival points is mind (water, food, shelter, clothing).  Having a separate bug out bag for the vehicle will also come in handy in the event that you are caught on the road during a sudden emergency.

When the big one hits, it is tragic but predictable that many people’s lives will be at risk, and property damage could skyrocket. If the response is not adequate to deal with the risk, millions could be cut off from their lifelines in society.

Don’t be one of them. Anyone living near a major fault zone will wish they had prepared for this. Surely you have already begun…

Prepper’s Blueprint: It’s Time to Get Serious About Prepping; How’s How to Survive Anything