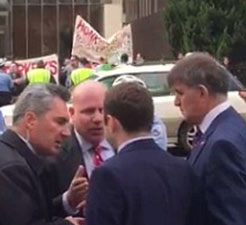 It may be completely legal for Turkish President Recep Erdogan’s minions to silence the voices of journalists, bloggers and other outspoken critics when in Turkey.

But when you’re in America, Jack, your autocratic tendencies and dictatorial inclinations are fair game for protesters, the media and our citizenry.

That’s the message the Turkish President’s body guards got from a Secret Service agent on President Obama’s security detail in Washington after Erdogan’s goons started ripping anti-Erdogan flyers out of peoples’ hands, physically assaulting them and throwing them the middle finger.

A video of the incident captures the Secret Service agent making it clear to Erdogan’s body guards that while free speech may be prohibited in the progressive European Union wanna-be state of Turkey, America is a bit different.

Stay on this side [of the road.] Do you understand? You tell him to calm down, this is America.

Act like an adult, stay on this side of the road. End of story. By going over there and flipping the bird you’re causing more problems for me, and for your protection.