They’re BACK! 3D-Printed Guns Are UNSTOPPABLE And Here to Stay 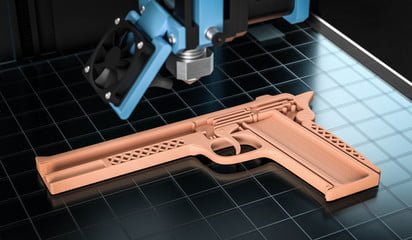 An entirely decentralized network of self-defense rights advocates have taken to the internet to provide plans for 3D-printed guns.  It looks like the 3D guns are unregulatable and unstoppable. They’re anonymously sharing the blueprints and advice while simultaneously building an unstoppable community.

Unlike previous attempts to popularize 3D-printed guns, this newer operation is entirely decentralized. There’s no headquarters, no trademarks, and no real leader. The people behind it already understand that this means they can’t be stopped by governments and their laws or regulations. “If they [the government] were to come after me, they’d first have to find my identity,” says Ivan the Troll, a member of the group. “I’m one of many, many like-minded individuals who’re doing this sort of work.”

According to Wired UK, Ivan the Troll is the de facto spokesman of an underground wave of 3D-printing gunsmiths. Ivan says he knows of at least 100 people who are actively developing 3D-printed gun technology, and he claims there are thousands taking part in the network. This loose-knit community spans the entire globe.

Ivan is just one small part of this network. He says he is from Illinois, and is of “college age”, but otherwise he remains mostly anonymous, to lie low. At the same time though, he’s launched bombastic PR videos demonstrating the new 3D-printed gun parts he’s created in his garage, including a Glock 17 handgun frame.-Wired UK,

Much to the chagrin of authoritarians worldwide, coming for an entire network of people is virtually impossible. And in all honesty, 3D guns wouldn’t be such a popular market if governments stopped trying to take rights away from people and enslave them. Ivan the Troll and others like him continue to help people regain their freedom from the violent authoritarians running the world’s governments.

One of his most recent videos shows the polymer Glock 17 frame in various stages of production in his workshop. The footage is set to fast-paced synthwave music and is run through a trendy VHS filter – the aesthetics are important. Toward the end, Ivan fires several rounds with the fully built handgun, as text flashes up saying “ANYONE CAN MAKE IT”, “LIVE FREE OR DIE”, and “GO AHEAD TRY TO STOP THIS YOU FILTHY STATISTS”. He’s also uploaded the complete CAD reference model designs for a 3D-printed AR-15 assault rifle to his file-sharing space online. –Wired UK

*As of this writing, Ivan’s video is no longer available on YouTube, however, there are probably many other places online it can be found. It doesn’t appear that censorship is going to hold people back any longer.

Earlier this year, in February, Ivan and his group decided to name themselves “Deterrence Dispensed”, which is a tongue-in-cheek nod to the notorious Defence Distributed – a 3D-printing gun company formerly run by Texan crypto-anarchist Cody Wilson. (Wilson was accused of paying a 16-year-old for sex). For Ivan’s group, Deterrence Dispensed, Wilson’s arrest is irrelevant. They are uploading files individually on services such as Spee.ch, a media-hosting site underpinned by the LBRY blockchain, and they already know that as human beings, they don’t require permission from any other human to do so.

Ivan the Troll says that America’s police state is part of the problem, and why everyone should be considering protection from the enforcers.

“The cops killed more people alone last year than all active shooter incidents in the last ten years,” he says. “We live in a society, in America, where you run the risk of a cop blowing your ass up for no specific reason. You don’t even have to present a threat to them. A cop can kill you and get away with it just because he really wanted to do it.”

He then went on to cite the many police shootings of unarmed black men in American, specifically mentioning Stephon Clark. Clark, 22, was shot to death by police in his own back garden while holding nothing but a mobile phone. “I believe it is inherently important that … you should be able to own a gun,” Ivan continued. “You should be able to own the same legal force that the cops are using to control you.” –Wired UK

There is no way to stop the anonymous file sharing of 3D-printed guns online.