The sun just released a massive solar flare. In fact, this is the largest solar flare emitted in the past decade, and the earth has already been affected by blackouts.

NASA has reported a huge solar flare was emitted by the Sun and it is the most powerful one since 2006.  This solar flare has already caused some radio blackouts on Earth and it may cause aurora visible as far south as London.  On the morning of September 6, scientists watched as two X-flares were unleashed by the sun.

The stronger flare was the second of the two emitted by the Sun yesterday morning and it was seen by NASA’s Solar Dynamics Observatory (SDO). At 5:10 AM EDT, the Sun unleashed an X2.2 flare, with X-class denoting the most intense flares. Then, at 8:02 AM EDT, a much bigger flare measuring X9.3 was unleashed. By comparison, the last time we saw a flare this big was in 2006, which measured at X9.0. The number shows the intensity, with X2 being twice as intense as X1, X3 three times as intense, and so on.

The loops of plasma emitted during these two flares were ten times the size of planet Earth. Scientists got to watch the massive coronal mass ejection from these flares, which can be seen below in the gif provided.

According to NASA, the flares were emitted from an active region of the Sun known as AR 2673. This region also emitted a mid-level flare on September 4, 2017. But scientists say the timing of these big flares is rather odd as the Sun is currently heading towards the quieter period of its 11-year solar cycle known as solar minimum. This cycle began in 2008, with solar minimum expected in the next couple of years.

“This is a phase when such eruptions on the Sun are increasingly rare, but history has shown that they can nonetheless be intense,” said NASA. And this one had some effects on life on Earth.  It knocked out the high-frequency radio, according to the NOAA, and degraded low-frequency navigation. But the Space Weather Prediction Center (SWPC) said it was expecting some radio blackouts yesterday, and the high-frequency radio was expected to drop out for an hour.

The particles from the CME (coronal mass ejection) can also cause aurora activity further south than normal as they interact with Earth’s magnetosphere. 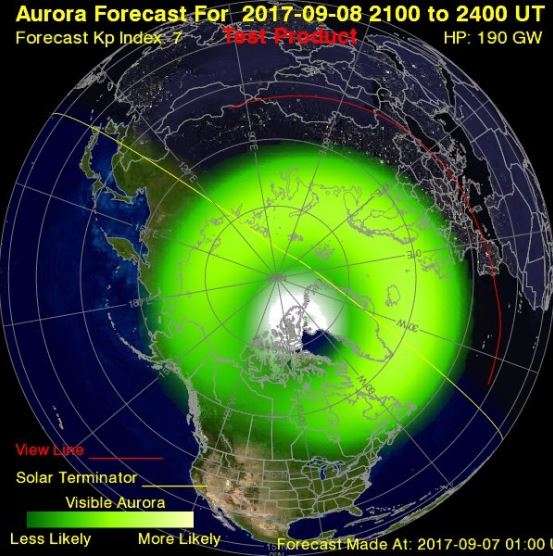 *The map above shows how far south the aurora will be visible thanks to these solar flares.  If interested, watch the skies for the show.

Scientists aren’t sure yet if the CME was directed towards Earth. If it does come our way, it could cause a strong geomagnetic storm that will further hamper communications.