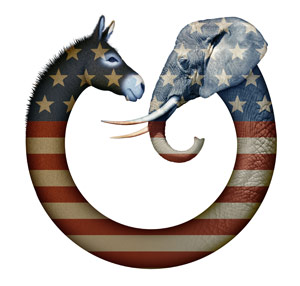 We are currently being “funneled” into a trap that is created day-by-day with glacial slowness with the intention of nullifying the Second Amendment of the U.S. Constitution, the right to keep and bear arms.  The “Overton Window” is a concept of pushing forth concepts that are believed to be acceptable by the public.  The media has been relentless in its aid to the administration by demonizing any and all who practice their God-given, Constitution affirmed rights to possess firearms.  The final enabling of this, however, is being carried about by the U.S. Congress and by President Obama with Executive Actions.

HR 1076, “The Denying Firearms and Explosives to Dangerous Terrorists Act,” was introduced in the House of Representatives in February of 2015 by Peter King (R, NY).  Here is the summary:

Denying Firearms and Explosives to Dangerous Terrorists Act of 2015

Amends the federal criminal code to grant the Attorney General the authority to deny the transfer of firearms or the issuance of a federal firearms and explosives license to any individual if the Attorney General: (1) determines that such individual has been engaged in or has provided material support or resources for terrorist activities, and (2) has a reasonable belief that such individual may use a firearm or explosive in connection with terrorism. Allows any individual whose firearm or explosives license application has been denied to bring legal action challenging the denial.

Prohibits the sale or distribution of firearms or explosives to any individual whom the Attorney General has determined to be engaged in terrorist activities.

Authorizes the Attorney General to revoke firearms and explosives licenses and permits held by individuals determined to be engaged in terrorism.

Nancy Pelosi on Thursday, used parliamentary procedure to force a vote on legislation banning gun purchases by people on the terrorist watch list.  It was Republican Peter King who introduced the bill.  Matt Fuller of the Huffington Post penned an article, “House Democrats Hijack Floor for Gun Vote.”  Fuller neglected to highlight the fact that a Republican set the stage for it.

Once again we are “treated” to the results of the system: pseudo-bipartisan government, the illusion of a two-party system.  Substantiating this concept are the continuous closed-door meetings, the latest being Paul Ryan’s with Pelosi regarding the coming Syrian “refugee” influx into the U.S.  Recall, readers: this sort of thing was vividly exemplified in 2009 when Olympia Snow (R, ME) performed similar “functions” as King that enabled Obamacare to come to the floor of the Senate for consideration and eventual voting.

Pelosi’s resolution is a 439-word diatribe that flaunts the term “assault weapons” in one paragraph while unwittingly stating the duties Congressmen are not performing in the next paragraph, that reads:

The subsequent paragraph convicts Congress and the Administration:

“Whereas leaders of terrorist organizations have previously urged sympathizers to exploit the United States’ lax gun laws in order to perpetrate domestic terror.”

Interesting and true.  Nothing could be closer to the point that the President of the United States, Barack Obama, hosted functions at the White House where the Muslim Brotherhood and other Al Qaeda operatives were hosted, feted, and recognized.  The Administration enabled the creation of ISIS and all of their current activities both domestically and abroad.  Let us not forget it was the Administration, not the Second Amendment, that illegally created Operation Fast and Furious leading to the death of a Border Patrol Agent.  Should this not mean that the Administration and its agents will now be required to turn it all explosives and firearms, as they “perpetrate domestic terror” through such actions?

Gun-control measures are crucial to the Administration and the Congress according to this “terror watch list,” because it is a list that is subject to the Attorney General (the President’s Attorney General), and can be kept out of the public eye with the subjectively-interpreted claim of being “in the interests of national security.”

Now the Administration is augmenting these efforts with an attempt to do it with aid and complicity of State governors, supported by Executive Orders.  All throughout this process we see Republicans caving in and proving that there really are only interests of parties, and not true political parties.  We are seeing the complete dissolution of checks and balances.  We are witnessing the erosion of the Constitution incrementally.

Soon Obama will take even further steps, justifying his actions by “Executive Orders” penned illegally, as they are onerous to the Constitution (in accordance with Marbury vs. Madison).  Obama is creating illegal laws under the color of law, and tying all of this in with the treaties his agent, Kerry has signed toward eventual gun confiscation with UN approval.  Day by day, step by step, and inch by inch the agenda is being pushed.  The question is if we the people are ever going to push in the opposite direction, and if so, when?

The Total Failure of Gun Control Captured in One Photo