“The Powers That Be Have Looted Everything.” Greek Farmers Fight Riot Police With Shepherd Crooks 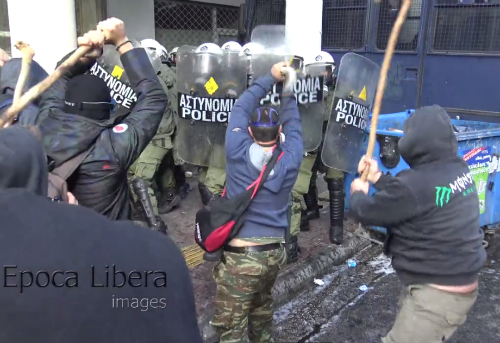 The economic and social disintegration of Greece used to be big news. However it’s largely been overshadowed by the migrant crisis, and the American media hardly reports on Greece anymore. If you’ve been out of the loop, allow me to get you caught up on the financial situation in that country, by giving two answers to the questions you’re probably thinking. Yes, the Greek government still sucks. And yes, the people of Greece are still really pissed off.

Believe it or not, riots are still a common occurrence in that country. In fact there was an incident last week in Athens, after the government tried to increase taxes and social security contributions. In response, over a thousand farmers from Crete, who used to be immune from these taxes, took a ferry to Athens and proceeded to riot outside of the agriculture ministry building.

This however wasn’t an ordinary riot, not even by Greek standards. The farmers fought the riot police with shepherd crooks.

Taxes are being hiked to satisfy inspectors who represent the international creditors who Greece’s debt. If the government can’t pay 7 billion euros by July, then the country will once again face the possibility of default. However, the farmers are determined to change their Leftist government’s mind about the tax hikes. One of the protesting farmers who spoke to The Guardian stated that “We want to have them take back everything they have encumbered us with. To us, it seems like the powers that be have looted everything.”