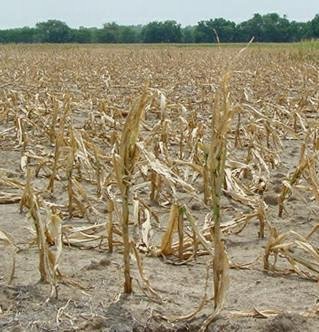 You’ve no doubt read the reports and seen the videosÂ all over the web regarding the severity of droughts in major food producing nations. Eric deCarbonnel, of Market Skeptics, wrote an excellent article titled Catastrophic Decline in 2009 Global Food Production where he researched the extent of the problem globally. If you are worried about SHTF, then add food to your growing list of concerns (if you haven’t already!).

Here is a brief synopsis of Mr. deCarbonnel’s research and the perfect storm that is brewing for coming food shortages:

If you are looking for specific numbers, take a look at Mr. deCarbonnel’s article.

Food shortages, which will ultimately lead to exploding commodity and retail food prices, combined with mounting job losses across the world (est. 50 Million globally) can quickly lead to civil unrest and riots, as has been predicted by Gerald Celente, and more recently, Peter Schiff.

What can you do?

The obvious answer is: Get a reserve food supply. While I don’t expect food to be completely unavailable for the masses, it would be in your best interest to have a 60 day reserve food supply. This way, if the SHTF, you’ll at least have 2 months worth of food. And, if food is not completely unavailable, you can supplement the bread and soup you get for your family after waiting in depression-like food lines with a nice side of Bush’s Baked Beans and some Vienna sausages.

How can you profit?

If you have some extra money sitting on the side lines you might be wondering how to make a little money from this looming disaster. If this is the case, then you’re in luck!

Commodities are near their recent lows as of this writing, so now might be a perfect time to make an investment that could pay off 200% – 300% in the next couple of years.

I am partial to the Invesco Powershares DB Agriculture Fund (DBA). This ETF holds equal weightings of Corn, Wheat, Soy and Sugar. I like this particular ETF because it has been around longer than most commodity ETF’s and it has a trading volume around 1 million shares per day.

If you are interested in an all inclusiveÂ commodity basket, take a look at Greenhaven Funds Continuous Commodity Index Fund (GCC) which equally distributes its holdings across 17 different commodities, including corn, wheat, grains, livestock, and orange juice.

And, if you want to leverage your commodities holdings 200% againstÂ the Dow Jonesâ€”AIG Commodity Index check out the ProShares Ultra Ultra DJ-AIG Commodity ETF (UCD). This ETf, like GCC above, has a basket of commodities that includes 25 holdings.Â In a commodity price spike,Â this ETFÂ should theoretically have higher earnings than the above two ETF’s, as this is anÂ ‘ultra’, leveraged ETF.Â There is some additional downside risk because of this, as well.

Note – Investments in commodities ETFs are subject to this risk of that sector. This article should be used for informational purposes only and is not investment advice.