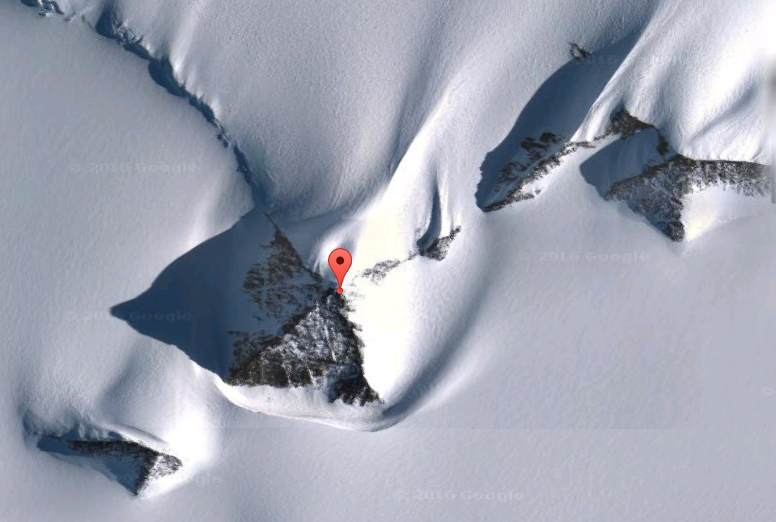 There are secrets in Antarctica. You can sense them from thousands of miles away.

And they are starting to come out.

A giant crack in the ice has freed an iceberg the size of a small U.S. state, and it will ignite the climate change/global warming debate; but this change will also offer unique perspective on the geological history that has never before been known. Ice is accumulating rapidly in one part of the continent, but melting in the other. According to Live Science:

Mysterious ‘Crater’ in Antarctica Has Ominous Cause:

A “crater” in Antarctica once thought to be the work of a meteorite impact is actually the result of ice melt, new research finds.

The hole, which is in the Roi Baudouin ice shelf in East Antarctica, is a collapsed lake — a cavity formed when a lake of meltwater drained — with a “moulin,” a nearly vertical drainage passage through the ice, beneath it, researchers found on a field trip to the area in January 2016.

“That was a huge surprise,” Stef Lhermitte, an earth science researcher at Delft University of Technology in the Netherlands and at the University of Leuven in Belgium, said in a statement. “Moulins typically are observed on Greenland. And we definitely never see them on an ice shelf.”

But it is evident that something is up in the South Pole, and climate change alone can’t explain it.

Though they are restricting what can be accessed, UAVs and satellite images are offering new information about the significance of Antarctica, and the secrets that it hides.There is covert military significance there, though little of anything is ever disclosed. There have been major conflicts between world powers over territory, and there are rumors of something beyond belief in the past of this magnificently unknown surface on our planet.

Startling images of a pyramid – or three – sticking out above the ice have been shared online, raising questions about the possibility of manmade structures and ancient civilizations that may have existed at a past time when Antarctica was relatively free from ice.

via the Daily Star:

If the structures discovered in the snowy continent prove to be man-made, it could change our understanding of human history.

Scientists have long believed the freezing climate in Antarctica was much warmer thousands of years ago.

In 2009, boffins discovered pollen in the continent, suggesting temperature was once as high as 20C.

And in 2012, scientists form Nevada’s Desert Research Institute identified 32 species of bacteria from Lake Vida, east Antarctica – further suggest the climate was entirely different to the frozen tundra that it is today.

Dr Vanessa Bowman previously said: “Go back 100 million years ago and Antarctica was covered in lush rainforests similar to those that exist in New Zealand today.”

Of course, there are those that have dismissed the notion and insisted that the structure is a naturally occurring nunatak, basically a mountain sticking out above the snow. And they could be right, until more is known. Of the many nunatak formations identified in Greenland and other part of Antarctica, for instance; some appear almost manmade, similar enough to a pyramid.

Nonetheless, the image is startling, and brings up fresh thoughts about the hidden history in Antarctica.

Things are changing rapidly on the mysterious frozen continent, largely forgotten in its solitude from the rest of the affairs of earth. Something is happening.

Secretary of State John Kerry made an unprecedented journeys there for what appears to be a flimsy pretext, with a vague reference to concerns related to the climate change issue. On the other side of the coin, a Cold War has reignited, and the U.S. and its allies are preparing for unconventional warfare on every front.

What did Buzz Aldrin mean and WHY did he delete this tweet?

“We are all in danger. It is evil itself.” pic.twitter.com/tYb9IFCfZk

Did he know something? Is there more going on there than meets the eye? Perhaps not.

But perhaps this place has a part in our unique drama; perhaps it has another purpose.

Though it is little known today outside the realm of conspiracy conjecture, the Nazis established a base colony in Antarctica known as Neuschwabenland during the late 1930s, and reportedly discovered the Schirmacher Oasis, where there is a large area of barren exposed land.

U.S. Admiral Richard E. Byrd made two major expeditions to Antarctica, including Operation High Jump, which included an entire military division as well as hostile action. Its exact purpose remains clouded, but related to dominance of world powers and Cold War conflict with the Soviet Union. A journal he wrote suggested an underground oasis somewhere in the territory he explored… but who could really say?

Rumors abound of secret technological research, and access to an underground world. The Nazis epitomized the nexus between occult archaeology, mysticism and the most advanced science of the day – what they may have experimented with or achieved is not entirely clear.

This remains solidly in the realm of conjecture, but one really has to wonder what might be announced there in the years to come.

If there were secrets to be found there, it could really change the way we understand the history of our planet, and the progress of the human species.

• Why Was A Mysterious Navy Plane Conducting “Secret Electronic Command/Control Drill” Over Denver?

• Elite Bunker Down in “Secure, Safe Rooms Hidden in Plain Sight”… And You Can, Too

• The Prepper’s Blueprint: The Step-By-Step Guide To Help You Through Any Disaster

• The “Dead List”: Who The Secret Government Plans to Target Next