The Future Of America: “It’s Coming… Ukraine is a Warning” 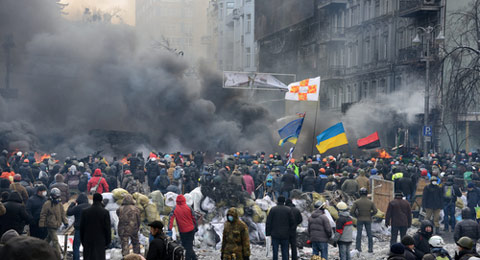 We’re beginning to see more and more discussions about how the laws, policies and regulations of our federal, state and local governments are working to impoverish the people of this country and restrict their liberties. So much so that even the taboo topic of a potential Ukraine-style collapse right here in America is now being openly discussed in mainstream circles.

In a recent panel discussion on Fox News the question of whether or not Ukraine rioting is the future of America came to the forefront and long-time political operative and former Presidential adviser Pat Caddell weighed in.

Like many of us, and despite his association with high level members of the Democrat Party, Caddell is concerned about what’s coming our way should things continue as they have been:

What we’re seeing in the world… in Kiev… is American values at work. These people and the rest of the world are saying ‘we’re not putting up with this and we’ll put our lives on it.’

In this country a populace equally dissatisfied with its political class and its leadership.

We don’t have the same overt oppression, but we have a very soft oppression of complacency and corruption.

And the American people… what you’re seeing there… they need their own outlet for that… it is a warning… because it’s coming.

Ever since the beginning of the financial crisis, when Congressional Representatives were told that failure to pass a $1 trillion economic bailout would lead to martial law in America, we have warned that there will come a time when the people of this country will take to the streets.

For years the mainstream ignored the warnings, even when the very same issues that drove hundreds of thousands of people onto the streets of Iceland, Ireland, Egypt, Spain, Greece and Egypt to depose their leadership and fight corruption appeared in America.

For years the alternative media has attempted to awaken the masses. And though many Americans have gained an understanding of what is happening behind the scenes and why, the vast majority continue to eat up everything dished out to them via their televisions.

Yet, now, even those stalwarts who previously refused to discuss or report on the reality of conditions on the ground over the last several years are coming around to the possibility of serious ramifications if something isn’t done.

If you’re paying attention, you know something isn’t right. Soon, even those who refuse to accept what’s happening around them won’t be able to ignore it any longer.