The Everything Bubble: When Will It Finally Crash? 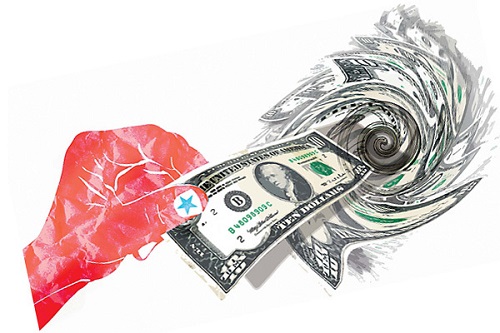 Much like the laws of physics, there are certain laws of economics that remain constant no matter how much manipulation exists in the markets. Expansion inevitably leads to contraction, and that which goes up must eventually come down. Central banks understand this reality very well; they have spent over a century trying to exploit those laws to their own advantage.

A common misconception among people new to alternative economics is the idea that central banks only seek to keep the economy afloat, or keep it expanding forever. In reality, these institutions and the money elites behind them artificially inflate financial bubbles only to deliberately implode them at opportunistic moments.

As I have outlined in numerous articles, every economic bubble and subsequent crash since 1914 can be linked to the policy actions of central bankers. Sometimes they even admit to culpability (to a point), as Ben Bernanke did on the Great Depression and as Alan Greenspan did on the 2008 credit crisis. You can read more about this in my article ‘The Federal Reserve Is A Saboteur – And The “Experts” Are Oblivious.’

Generally, central bankers and international bankers mislead the public into believing that the crashes they are responsible for were caused “by mistake.” They rarely if ever mention the fact that they often use these crises as a means to consolidate control over assets, resources and governments while the masses are distracted by their own financial survival. Centralization is the name of the game. It is certainly no mistake that after every economic implosion the wealth gap between the top 0.01% and the rest of humanity widens exponentially.

Yet another crash is being weaponized by the banks, and this time I believe the motivations behind it are rather different. Or at least the goals are supercharged.

The next phase of the financial elite’s plans for centralization involve a complete restructuring of the global monetary climate, something Christine Lagarde of the IMF has often referred to as the great “economic reset.” The term “economic reset” is more likely code for “economic collapse,” one epic enough to facilitate a completely new monetary framework with a new global reserve currency. A historically unprecedented economic reset would require a historically unprecedented financial bubble, which is exactly what we have today.

The ‘Everything Bubble’ as many alternative analysts are calling it is built upon multiple crumbling pillars. Here they are in no particular order:

Bailouts and QE measures on the part of central banks have been used as a stopgap since the 2008 crash to prevent market reversals whenever they appear. Most of all, central banks have been particularly obsessed with keeping stocks in a perpetual bull run, which Ben Bernanke and Alan Greenspan admitted was part of maintaining a certain positive “psychology” within the public. In other words, the purpose of stimulus measures was to give the masses a false sense of security, not heal the real economy.

The other primary initiative behind stimulus was to prop up debt poisoned governments and corporations around the world. However, the intention was not necessarily to help these institutions climb out of the red. No, instead, the goal was to keep them semi-solvent long enough for them to take on EVEN MORE debt, to the point that when they do collapse the aftermath will be so devastating that recovery would be impossible.

The timing of the central bank tapering of QE should be treated as an alarm on the crash of the everything bubble. With the Federal Reserve cutting off QE measures, the Bank of Japan using “stealth tapering,” and the European Central Bank warning of high inflation and the need for tapering, it is clear that the era of easy money is almost over. When the easy money is gone, the crash is near.

Using steady loans from the Federal Reserve as well as Trump’s tax cut, stock markets have been inflated beyond all reason by corporations implementing the equities manipulation scheme of stock buybacks. By artificially reducing the number of stock shares on the market, companies can increase the “value” of the existing shares and fuel a bull market rally. This rally has nothing to do with actual wealth creation, of course. It is a game of phantom wealth and inflated numbers.

Stocks in particular will require ever more debt on the part of corporations along with never-ending near zero interest rates in order to keep the farce going. The central bankers, though, have other plans.

Low interest rates should be considered a part of the stimulus model, but I’m setting them separately because they represent a special kind of market manipulation. The option for corporate entities to borrow from the Fed at almost no cost has done little to improve the effects of the 2008 credit crisis. In fact, corporate debt levels are now near all-time highs not seen since the last crash. This time, however, dependency on low cost loans has conjured a monstrous addiction within the business cycle. Any increase in interest rates will trigger painful withdrawals.

Central banks around the world are now increasing that pain as they hike rates well beyond what many analysts were expecting a few years ago. Corporate debt in particular is highly vulnerable to this new tightening policy. Without low rates, corporations can no longer afford to hold the debts they have, let alone take on more debt in a futile attempt to keep equities propped up.

Central banks argue that “inflation” is the excuse for hiking interest rates at this time. True inflation has been well above Fed targets for years, and the banking elites showed no care whatsoever. I suspect that the real reason is that the next phase of the reset is near, and a little chaos is needed.

For decades, the Fed has kept the neutral rate of interest well below the rate of inflation. For the first time in at least 30 years, the Fed under Jerome Powell is seeking to increase neutral rates to make them equal to the pace of inflation (official inflation). The Fed has approximately two to three more rate hikes (including the September rate hike) to reach the pace of inflation. I believe this is our window on the next crash; the moment at which the Fed completely reverses its past policy of artificial support for the economy.

Corporate buybacks are at all-time highs in 2018, and it’s obvious that this is meant to offset the Fed’s waning support for the markets. As interest rates increase and the Trump tax cut dwindles, though, buybacks will die.

If we consider the possibility that the Fed’s assets also include stock shares as many suspect, then the Fed asset dumps would also INCREASE the number of existing shares on the market and sabotage corporate efforts to reduce shares through stock buybacks. I predict stocks will once again converge with the falling Fed balance sheet by the end of this year and that they will continue to drop precipitously through the last quarter of 2018 and the rest of 2019.

Central banks need cover before they can launch their “global reset,” and what better cover than a massive international trade war? Trump’s trade war is an excellent distraction which can be used as a rationale for every negative consequence of the central banks pulling the plug on stimulus life support. Meaning, the disasters the central bankers cause through tightening into a weak economic environment can be blamed on Trump and the trade conflict.

I don’t think it’s a coincidence that almost every escalation in the trade war happens to take place at the same time as major central bank announcements on rate hikes and balance sheet cuts. The latest trade war salvo of $200 billion in tariffs against China is leading to a Chinese announcement on retaliation — all of this taking place on the exact week of the Fed’s September meeting which is expected to result in yet another rate hike and expanded balance sheet cuts.

The Fed’s tightening policies have resulted in a severe reaction by emerging markets which are already crashing and have diverged greatly from U.S. markets. American stocks will not escape the same fate.

The Fed’s neutral rate efforts suggest a turning point in late 2018 to early 2019. Balance sheet cuts are expected to increase at this time, which would also expedite a crash in existing market assets. The only question is how long can corporations sustain stock buybacks until their own debt burdens crush their efforts? With such companies highly leveraged, interest rates will determine the length of their resolve. I believe two more hikes will be their limit.

If the Fed continues on its current path the next stock crash would begin around December 2018 into the first quarter of 2019. After that, other sectors of the economy, already highly unstable, will break down through 2019 and 2020.