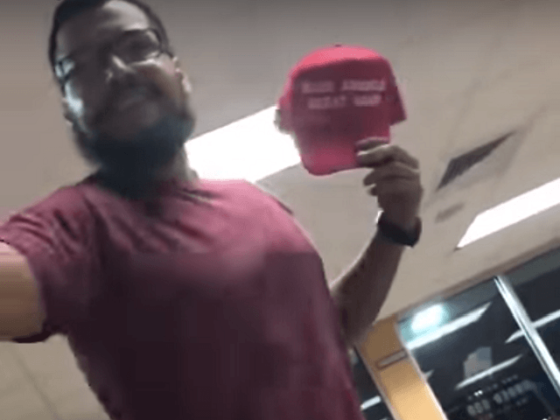 Sixteen-year-old Hunter Richard was wearing a “Make America Great Again” hat while enjoying a calm dinner at a Whataburger in Texas when a stranger, now identified as 30-year-old Kino Jimenez, yanked it off his head and threw a soda in his face.  But Richard now has a new hat, and it was signed by Donald Trump himself!

*Please note that the below video contains racial slurs and could be considered violent to some.

Jimenez was later arrested and shortly thereafter fired from his job for ripping off Richard’s hat and stealing it. “This is gonna go right in my f**king fireplace, b***h,” Jimenez said, acting like a bully for stealing a teenager’s hat. Jimenez also threw a soda in Richard’s face.

Richard’s hat appeared to be gone for good until the video of the incident went viral and he received a new MAGA hat signed by the president himself, reported The Daily Wire.

Among those who commented on the video’s original posting was Donald Trump Jr., who retweeted a story about the assault against the teenager.  “If someone can get me this young man’s information I’ll get him a new #maga hat… SIGNED by #potus!!!” he wrote on Twitter.

If someone can get me this young man’s information I’ll get him a new #maga hat… SIGNED by #potus!!! https://t.co/zHBz4gKpkf

“Teen who made national news after having #MAGA hat stolen at a San Antonio fast food restaurant just got this in the mail. A hat signed by @realDonaldTrump,” Joe Gallow wrote on Twitter.

#Update: Teen who made national news after having #MAGA hat stolen at a San Antonio fast food restaurant just got this in the mail. A hat signed by @realDonaldTrump.

Richard told media outlets that he’s been a bit surprised by everything that’s happened since the video was posted online. “I didn’t think it was going to generate the amount like what people are doing, I was looking at the comments by some people and ‘they are like this is uncalled for’ and other people are like mixed opinions but I didn’t think it would blow up to what it is now,” he said to News-4 San Antonio.