System Failure: “Carnage” In The Markets

The markets are showing there’s a massive strain on the monetary system. With inflation destined to turn into true and unavoidable hyperinflation, the United States is undergoing a “carnage” that is going to be hard to deny.

With S&P futures a one-way elevator lower after a modest rip higher on Ukraine ceasefire optimism early in the session, sending spoos more than 120 points down from session highs and closing down 2.9%, below 4,200, its worst close since October 2020… 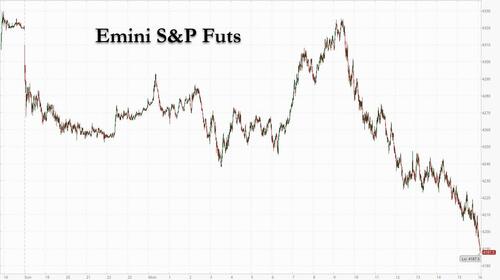 … and the Dow tumbling more than 800 points, everything was in the red, with the exception of the defensive utility sector and of course energy which is basking in the glow of a historic surge in the commodity space.

There will be no hiding from reality once the ruling class pulls the plug on the financial system. At that point, they will announce their CBDC (central bank digital currency) and the permanent enslavement of those who go along with it. The end game is complete control, and we are on the precipice of seeing just far they are willing to go to try to enslave everyone on this planet.

Digital Health Passports: The Snare That Will Lure Many Into The One-World Cashless System

Everything being done to humanity is done for this one reason: slavery. We all know by now that we aren’t free and never have been. If you were born under any government of any name on this planet, you are a slave to that particular master. That illusion is finally falling away, but will enough figure this out in time? Here’s hoping…

All of their scams and hoaxes and propaganda are being done for a reason. We will soon see why they used a “pandemic” to force gene-altering mRNA shots into the bodies of most humans. Personally, I don’t expect it to be pretty, especially when people finally figure out what they voluntarily did to their own children.

Until then, they will focus on the destruction of the current slave financial system.

Ukraine and Russia appear to be a distraction and one that the ruling class masters can blame hyperinflation on, bringing in their digital currency. The choice has always been ours. Are we going to be their slaves?