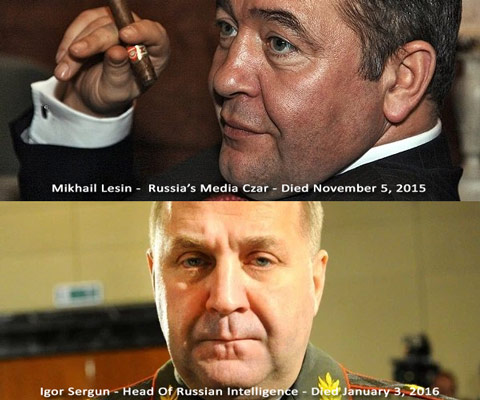 The MSM has quietly and almost indiscernibly let out a sigh, either in sorrow or in relief.  If sorrow, it should be because two deceased individuals such as these should not have gone quietly into that “good night,” when their identities are considered.  No, there should have been a mighty roar, considering who they were: two of Vladimir Putin’s inner circle, both giants in Soviet and Russian affairs.

Lesin, if you recall, was found dead on November 5, 2015 in his hotel room in Washington, D.C. by the DC metro police.  He was ruled dead of a “heart attack,” with little complaint, investigation, or media attention either in Russia or in the U.S.  He was not buried in Russia, but in the U.S., in Los Angeles.

Mikhail Y. Lesin had been a media executive and close adviser to Vladimir Putin since 2004, and awarded a medal of “The Order for Merit to the Fatherland,” one of the highest civilian awards in 2006.  He served two years (1976-78) in the armed forces of the USSR and then became a giant in the Russian television industry and a true oligarch and devotee to Putin.  More: he became the Kremlin’s media czar in charge of censoring all independent television news sources in Russia, and was Gazprom-Media’s head from 2013 to 2015.  Even before this, he ran the Soviet State Media from 1997 to 1999.

Sergun is even more impressive, being the driving force to resurrect the GRU (the Russian Intelligence Directorate, equivalent to our CIA) and reapportion the Spetsnaz teams after internal and tactical employment problems following the Russian wars in Georgia and Chechnya.  His “quiet” death on January 3, 2016 is another passing barely mentioned by the MSM and (once more) without much ado even in Russia.

Igor Dimitirevich Sergun was a Major-General, and the Director of the GRU of the Russian Federation Armed Forces from 2011 to 2016.  This is the equivalent to the Director of the Central Intelligence Agency.  Sergun entered the Armed Forces of the USSR in 1973.  He graduated from the Moscow Suvorov Military School and the Moscow Supreme Soviet Higher Military Command School.  He also graduated the Military Academy of the Soviet Army, and subsequently (after the USSR “retired”) the General Staff Academy of the Russian Federation Armed Forces.

Sergun worked MI (Military Intelligence) of the Main Intelligence Directorate, a field operative who rose to the rank of Colonel as an intelligence operative, and he was fluent in several languages with a great deal of experience in the foreign intelligence service.  He was hardcore: very hardcore, very dedicated with a list of combat awards and honors as long as your arm.  He “died suddenly,” as reported by the media.

Incredible, that these two guys just “die” with barely a ripple in the media.  All the while, the losses of each as opposed to the notice in the news are at two ends of the spectrum.  One would think a colossal State funeral for each of them.  Lesin buried quietly in Los Angeles (not Russia, mind you) and the disposition at the time of this writing not yet determined for Sergun.  There is a strong possibility that a “Sea Change” has occurred over these past few months within Putin’s inner circle with these two top men being the most noteworthy.  There can be many reasons, but it is well-known that the methods used in the Federation are a carryover from the time of the Soviet Union regarding both military doctrine and “change of command” ceremonies, the latter of which can feature “forced retirement,” as may have been Lesin and Sergun’s exits.

The question that underlies such a possibility is “why,” however, history is replete with examples of how, in many countries, individuals rise up and effect tremendous reforms and changes.  These changes are continued; however, they continue without them, those that initiated the changes.  One major reason is the innovators are feared as potential challengers to the leader’s position of power.  Other reasons are to either cover up something the leader has done or planned to do, or the potential rival and innovator holds key information that may affect the outcome of the leader’s future plans.

Could it be that both of these men were privy to Putin’s overall game plan and had to vanish?  Their respective fields of endeavor (Russian Media, and Russian Military Intelligence) and the organizational structures of their former fields are still intact, right?

Look at what has been happening in the U.S. for years, now, with the cashiering of General Officers, Field-Grade Commanders, and Senior Non-Commissioned Officers of the entire United States Armed Forces.

We don’t know what Putin’s plans are, but at a dinner engagement in December of 2011, Putin remarked that Russia was the only country that could destroy the United States in a half hour or less.  Pretty strong words, also considering the fact that the newest Russian Defense Statement released shortly after the New Year lists the United States as a top threat to Russian Security for the first time in a long time.

Understandably so.  NATO and the U.S. have attempted to “box” Russia in, first with missiles and materials, then men, in Eastern Europe.  The U.S. created the coup to take over Ukraine for NATO and the IMF, and it backfired: Russia stepped up and seized the Crimea before NATO could grab hold of Sevastopol, Russia’s most important Black Sea facility.

This brings us to the final point: could these deaths have been assassinations effected by the Obama administration?  The loss of two incredibly high-value confidants to Putin could cause serious problems for Putin in their areas of expertise.  A heart attack for Lesin in D.C., and Sergun’s “sudden death” are too coincidental in such a short period of time for two healthy men.  At the very minimum, such losses of Putin’s assets would have some setbacks for him in terms of command and control structures militarily and from a separate but inseparable sector so key to Putin’s governance: media control.

We’ll have to see what develops in order to determine which of the possibilities is the most viable explanation.  Undoubtedly the American media will not cover it in great detail, and there is also the possibility that both sides…Obama and Putin…may have even helped one another in these matters.  Remember, after all, Obama has already displayed “submissive behavior” when he told Medvedev in 2012 (regarding US missiles) to “tell Vladimir I’ll have more leeway after the election.”  With such words from a sitting President, anything is open in the realm of possibilities.  Also, why is Lesin buried in L.A. and not Russia?  Just as all things with potential sinister underpinnings, for whatever reason explored, it seems the end state of these two men has a lot of unanswered questions that we may never get to the bottom of for many years to come.