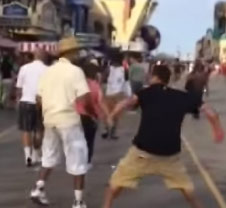 In his book Surviving the Economic Collapse Fernando ‘Ferfal’ Aguirre says that because most people are used to peace and stability they often realize too late that they are in danger. Rather than taking up defensive positions when pushed or confronted by strangers people tend to default to traditional social guidelines so as not to appear inconsiderate or overly reactionary. “This is based on a natural tendency to please others,” says Aguirre.

But making this mistake could have serious adverse implications for you and your family, because acting just a split-second late could lead to serious injury or even death, an outcome Ferfal witnessed all too often during the disorderly collapse of Argentina in the early 2000’s.

“You have to re-program yourself to react violently when surprised or threatened in any way,” recommends Aguirre, who notes that it is necessary to modify your psychological  and unconscious social behavior in environments where the potential for violence is high. Rather than expecting non-confrontation, a prepared individual should expect exactly the opposite.

The following video, taken on the Atlantic City Boardwalk shows how very quickly a simple disagreement can turn violent.

An unknown individual is seen arguing with a street vendor and pushing his street booth against the man in what can only be described as an act of thuggery. The vendor is seen trying to back away from the man, but the thug would have none of it.

As the vendor backs up, the thug keeps moving towards him, cutting off any escape route. Words turn to fists and the thug lunges forward with a pretty powerful punch.

The vendor, having anticipated the violent action, immediately moves off of the assailants attack line and out of the way.

After that it’s lights out.

As you watch the video pay close attention to the street vendor’s right hand. While he attempted all methods of avoiding confrontation – stepping backwards from the fight, walking away, and even putting his hands up in a universal non-confrontational manner – it is clear that he went into the situation with the assumption that this individual might take it further than just a screaming match. As such, he concealed what seems to be some sort of metallic weapon in his right hand.

After the thug lunges towards the vendor, the subsequent counter-attack is swift and devastating.

The thug literally never knew what hit him.