STALEMATE: 2ND STIMULUS – THIS CHANGES EVERYTHING!

Nancy Pelosi wants a stimulus bill that is over $3 trillion. Mitch McConnell wants to pass something in the order of $500 billion. These leaders are clearly worlds apart. Nancy even rejected bills that were $1.5 trillion, saying that they were “nice but not nearly enough.” On the other hand, conservative Republicans are saying that the free market ought to be taking the lead while the government has done enough and that the debt is already gigantic.

The problem is that neither party wants to concede, giving even an inch to the other side since they’ll appear weak in front of their voters. Both parties desperately want to win the Senate race in Georgia. It’s going to get very political, with hundreds of millions raised for the cause, and January 5th is the vote – even Trump and Biden might campaign. The problem is that January 1st comes before that and if nothing is done, millions of people, many of which are parents with children, face evictions since they’re not capable of paying rent, while millions of others will cease receiving enhanced unemployment benefits.

Therefore, a bipartisan group of senators is working on a bridge-stimulus plan as we speak.

Future Money Trends believes that there’s a strong chance that, when it comes to rent, an extension of the moratorium will be introduced. If it doesn’t, Q1 2021 could be one of the best times to purchase homes since prices will dip because of the excess inventory. 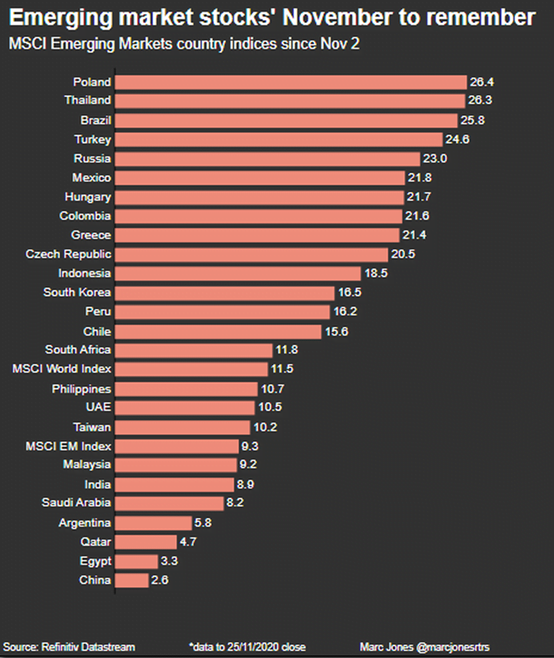 November has been the best-ever month for stocks on a global basis. It’s absolutely mind-boggling how much euphoria is out there. When you think about mortgage forbearance, which has allowed households to “save” $1,000 to $2,000 every single month since the bill was introduced, you can understand how much leverage is being put into the stock market that will need to be taken out later. Households have been using the extra cash to invest, but they’ll need to pull it out, at some point.

It’s happening all over the place and the temptation to trade has never been bigger.

As you can see above, indices of entire nations have gone up in one month as much as stocks return in 4 or 5 years.

The technical Relative Strength Indicators (RSI) are just green everywhere, save for precious metals most likely. 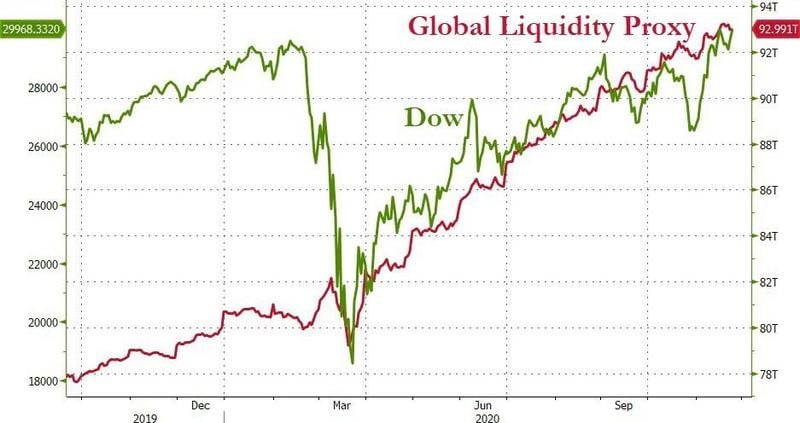 On the 15th of December, the FED will convene to discuss interest rates and asset purchases, going forward. If there’s no bipartisan bill by then, we believe they’ll increase QE again.

There are now talks about forgiving student loan debts from $10,000 to upwards of $50,000. There are 45 million Americans who have student loans, and these are individuals who struggle to originate mortgages, raise their credit scores, and save anything.

On the flip side, forgiving these loans will fuel even more socialistic programs, and will cause tuition in this country to be jacked up further, argue the fiscally-conservative. It’s also unfair to reward debtors while punishing those that chose not to assume massive obligations.

In our assessment, when the next president asks his economic advisors for the best ROI for another fiscal program, they’ll point towards state and local government aid, where for every $1,000,000 spent, nearly 90% of it goes immediately back to the economy.

This is much higher than in the case of student loans, so while Elizabeth Warren and Bernie Sanders introduce far-left initiatives, it doesn’t seem like that’s the way the country is headed.

We currently put the odds of stimulus checks hitting the mailboxes of Americans as being very low in the next 40 days. We give it more of a chance after January 20th, but if the bipartisan proposal somehow passes, markets will celebrate this surprise.

As for us, we are not aggressively participating in this party. There’s not enough alcohol in the world to convince us to play with fire.