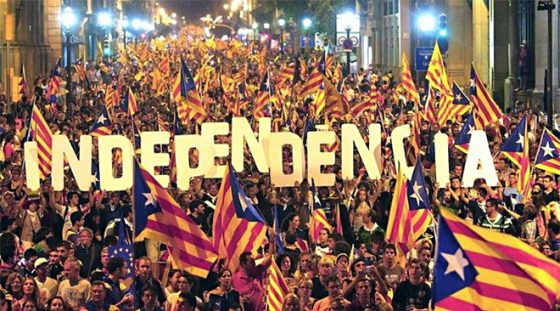 The Guardia Civil, which acts with the authority of Madrid’s interior ministry, is searching for evidence regarding the planned October 1st referendum on Catalan independence, which Spain’s Constitutional Court has declared illegal. The Catalan president has accused the Spanish government of effectively suspending the region’s autonomy and declaring a de facto state of emergency.

Repression on Terrassa city: this is what demonstrators providing support to #1Oct referendum have got from Spanish police pic.twitter.com/QTyhvDTQFD

According to The Guardian, Carles Puigdemont, the president of Catalonia described the raids as a “co-ordinated police assault” that showed that Madrid “has de facto suspended self-government and applied a de facto state of emergency” in Catalonia.

Tensions between Madrid and Barcelona have also escalated in recent days as the government of the Spanish prime minister, Mariano Rajoy, strives to ensure that the controversial independence vote does not take place on October 1st, while the mayor of Barcelona, Ada Colau, appears to back those hoping to vote for their independence. The mayor tweeted: “Searching public bodies and arresting officials is a democratic scandal. We defend Catalan institutions.”

Yet, the Spanish government is using whatever force necessary at this point to prevent the independence referendum.

On Wednesday morning, Spain’s interior ministry announced it was cancelling leave for all the guardia civil and national police officers tasked with preventing the referendum. In a statement, it said the affected officers would have to be available between 20 September and 5 October, but added the period could be extended if necessary.

The raids come a day after the guardia civil confiscated referendum documents from the offices of a private delivery firm in the Catalan city of Terrassa. More than 1.5 million [sic] referendum leaflets and posters have also been seized. –The Guardian

The protesting crowd has grown since word of these arrests broke. Breaking into the Catalan national anthem and waving placards reading “We are voting to be free”, the protestors began by chanting “No tinc por” (I’m not afraid) – the slogan used in response to last month’s terrorist attacks in the city. But the chant was soon replaced by a new cry: “Occupation forces out!”

As people around the world march for more freedom from the oppression of government, many Americans appear to be doing the opposite.  With heads glued to social media, many march for more government control over their lives dragging others down into the tyrannical oppression with them.