There are many serious issues to address, relevant to current events. Just to skim some of what has happened most recently, the Dow Jones (although a “lagging” indicator) has been extremely volatile within the past month, appearing to be headed toward a loss for the year overall. Spending is down, and the “bubble” of pseudo-consumer confidence prior to Thanksgiving seems to have dissipated.

The main focus: the unrest that is swiftly crossing national borders has a common denominator in France, and now in Belgium and the Netherlands. That common denominator is that of the populace being fed up with the amount of taxation, coupled with the politicos pushing illegal Muslim aliens into nations that have been predominantly Christian for almost a thousand years.

In countries such as Germany, Sweden, and Norway (whose ancestors were not known for playing “softball,” i.e. the Saxons and Vikings, respectively) we have been witness to rapes and beatings perpetrated by Muslim illegal aliens with the governments either looking the other way or encouraging it. Soros and those of his ilk in the EU have been pushing this “forced integration” of an invasion of illegals with a huge ethnic and religious gap between them and the host nations.

The controllers (oligarchs and politicos) are pushing these (numerically speaking) armies of aliens into previously stable nations…for several express purposes:

We have been witnessing an internal conquest fomented upon each of these European nations more effective than any invasion with military resources. The controllers are “injecting” these aliens into the populations and allowing their destructive natures and habits (completely at odds with the host nation) to destroy those countries….from within.

On December 7, 2018, Zero Hedge published a piece entitled Viral Video Of French Students Lined Up Execution-Style Sparks Outrage; Protesters Want Macron’s “Scalp” that really bears looking at. The cops there are way out of hand. The most interesting part of the article, however, may be the interview that was conducted with a Parisian cab driver, and his stance in that interview summarizes the rage and betrayal felt by the French people. Here’s a piece of it for you, and the article highlighted some words in the excerpt…and I’m leaving them that way, as they are worth reading and keeping in mind:

One angry Paris taxi driver called for Macron’s “scalp” in a half-hour monologue, according to Bloomberg.

“We’re going out there to fight,” he said, adding: “I want Macron’s scalp, I’m not afraid of anything. I have nothing to lose. You have to risk your life or you don’t get anything from these people.”

And why does the cab driver feel this way about Macron? Read this other part, showing it is not “blind rage” for no reason:

For people like the taxi driver, there’s no limit when it comes to removing the youngest French leader since Napoleon who, as the country’s economy minister between 2014 and 2016, deregulated the taxi business and was a strong supporter of car-booking apps.

“He ruined us, he broke our business,” the taxi driver said. “He wants everything new, digital, the new world, and he did it all without thinking of the cost for us. Replace everyone, have everything young, new? Yeah, well that’s not how you do things. Now it’s payback time.”

Reminds me of Jesse Ventura’s words in the movie “Predator,” but you see the point: after they push you into a corner, you have to come out swinging. We are facing a similar situation in this country. The President has been holding his own, and it appears with the Mueller witch hunt and the Democrat Party gathering torches and pitchforks, the offensive is going to take a new direction. In January, the House (now Democrat-controlled) is back in control of defense expenditures, and that is going to place actions that the President is taking (troops on the border to halt the illegal alien “caravan of love,” and to build a wall) in danger of being halted and/or defunded.

Another article came out on December 3, 2018, entitled German biker gangs are standing up for their country’s women by beating the hell out of the Muslim ‘refugees’ in the[ir] midst who keep assaulting them, by ludinfo24.com.

Here is an excerpt:

Days after the sexual assaults on German women in Cologne city came to light, local gangs are uniting in a “manhunt” of foreigners.  And just this weekend, two Pakistanis and a Syrian man were injured in attacks by gangs of people in Cologne, German police said. On New Year’s Eve, Cologne was the scene of dozens of assaults on women, a number that has grown into hundreds as more and women have come forward to register complaints. Local newspaper Express reported that the attackers were members of rocker and hooligan gangs who via Facebook arranged to meet in downtown Cologne to start a “manhunt” of foreigners.

You can plainly see the fawning media over there is no different than ours…as it labeled the bikers as “members of rocker and hooligan gangs.” Hooligans, eh? So, if they are “hooligans” for stepping up to the plate and defending their women, then what are the Polizei for permitting these crimes to occur against the women?

What they are: conspirators, who are complicit with the crimes committed by the controlling politico-oligarchy…the crimes of not protecting the German citizens from these Muslim invaders. Here’s the picture posted by ludinfo24.com with the article: 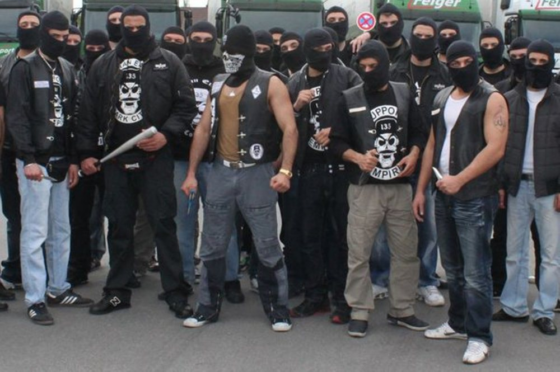 Look closely at the photograph. These guys are (even with the masks you can see it) pretty clean cut, dressed cleanly and normally…and they’re not “soy boys” by any stretch of the imagination. The prediction? German bikers 1, Arabs 0, plain and simple….and as it should be. It is a beautiful thing to see them stand up for their women…since their rights have been flushed into the toilet, or swept under a prayer rug or magic carpet.

When law enforcement fails to enforce the law and protect citizens from illegal aliens…then it is no longer law enforcement….it is an armed tyrannical enforcer of a dictatorship….voted into office legally, but pursuing actions that are not approved by the populace. Just as Marbury vs. Madison pointed out under our system, if something is onerous to the Constitution, then it is not to be considered lawful in any way, shape, or form. That also includes [mis]representatives who circumvent the will of the people by using the power of their position.

They were elected legally, but to represent the will of the people, not to accomplish the “fundamental transformations” of countries in stark contradiction to their constitutions, charters, and laws, and to the detriment and/or physical harm of their citizenry.

In previous articles I outlined 3 measures the globalists will take to collapse the systems and usher in a totalitarian global government (in order): A pandemic (fostered or artificially-created), an EMP event, or a Nuclear war.

You are seeing the final methods being used as a precursor to those three actions: the collapsing of the economies, the inculcation of the complete surveillance state, and the dissolution of the nations through internal subterfuge as has been outlined within this article.

One of the advantages that the European nations have in dealing with confronting their governments is ethnic homogeneity. This leads to a single-minded purpose, in which they will not settle for anything less than the capitulation of the government, and at a bare minimum, forcing the resignation of the leadership. Look at Merkel: not going to run for office again. Now look at Macron, one step from being shown the door by the angry mobs. They called out almost 90,000 police to deal with these riots in France, only to find that a great number of the police are siding with the populace!

Look at what is happening in the United States. Look at the crimes ranging from rape to murder that are being inflicted upon American citizens who live on our southern borders. Hungary has set up barbed wire and machine gun positions to keep out the illegals. We, on the other hand, send the National Guard…to do what? Play “Yahtzee” or “Scrabble” with the illegals? Best 3 out of 5 wins?

It is an invasion, plain and simple. The controllers originally intended for the U.S. to be where South Africa is now…with the reins of power taken away from white South Africans…and soon for them to be completely vilified and driven off of their land…and worse. It hasn’t happened that way here yet, but they have been pushing the destruction of the country through forced “immigration” for decades. Remember that President Reagan gave amnesty to a million illegals. Such actions are not monopolized by the Democrats and Obama. The former President they just buried was the one who created NAFTA….Clinton merely signed it into law.

In order for a nation to continue, it needs to maintain all of the elements that made it a nation. Those elements can be found within the borders, language, religions, and culture of its people. When the laws that are made within a nation to protect its citizens and maintain it are flagrantly disobeyed or circumvented by its politicians, courts, and legislators, it is time for that nation to return to the grass roots and exercise their rights. Just because a government is of and by the people doesn’t mean that it is “for” the people.

The instabilities we are seeing are a precursor of things to come, and the Parisian cab driver was correct…in order to change an evil, sometimes you have to be willing to risk everything you have. Let’s close with a quote from our recently-departed former President, George H.W. Bush that may stem the flow of the single tear coursing down the cheek in mourning:

“Sarah, if the American people ever find out what we have done, they would chase us down the street and lynch us.” – President George H.W. Bush to Sarah McLendon, Journalist, in 1992 Press Corps Interview, when he was asked about Iraq-gate and Iran Contra