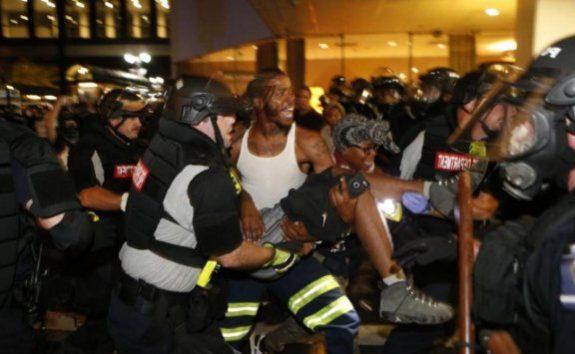 Editor’s Comment: The disturbing riots and “protests” in Charlotte underscore a larger spiral into chaos. While many of the protests over police shootings have raised attention to the inherent hypocrisies and devaluing of lives, this time, there is no basis, reason or sound justification.

This is a population that has been pushed to the brink and intent on having violence for violence sake. Unfortunately, it is a pattern that has been spreading. Before long, it will overshadow the legitimate grievances and any positive results of protest action, and instead push the country to the point of widespread civil unrest and racially-motivated attacks. This will not help reform police, or promote social justice; it will justify a police state and handily distract from the coming collapse.

Rioting and civil unrest are becoming a common occurrence in America. The city of Charlotte has been hit by a second night of violence even though authorities are desperately pleading for calm. What sparked the chaos in Charlotte was the shooting of a 43-year-old black man named Keith Lamont Scott. It appears that he was armed when he was shot, and the police officer that shot him was also black, but those facts have done little to ease the fury of the protesters. On Tuesday night 16 police officers were injured by rioters, including one that was hit in the face by a rock. Hopefully there will be fewer casualties by the time the violence on Wednesday night is over.

So far things don’t look good though. The following is how USA Today is describing the violence that we have witnessed so far on Wednesday night…

A second night of dramatic protests gripped this North Carolina city Wednesday night, one day after a police-involved shooting of an African-American man led to angry demonstrations, smashed windows and trucks set ablaze.

Protesters beat against a police van and broke a window of the City Smoke barbecue restaurant and bar downtown. Some yelled “hands up, don’t shoot.” Police tossed out smoke bombs. Protesters running outside of the Omni Charlotte Hotel said someone had been shot but that could not immediately be confirmed Wednesday night.

Later on it was confirmed that someone indeed was shot. In fact, local news is reporting that there is a pool of blood on the ground…

At least one person was injured in the confrontation, though it wasn’t immediately clear how.

“They shot him,” one witness told WBTV. “They tried to cover up his blood.”

Firefighters rushed in to pull the man to a waiting ambulance.

Officers on bicycles surrounded a pool of blood on the ground and a few people threw bottles and clods of dirt at police.

Of course this follows an extremely tense night of violence and chaos that made headlines all over the globe. Just hours after Keith Lamont Scott was shot, hundreds of very angry protesters descended on downtown Charlotte…

Several hundred people blocked streets well after midnight, despite the use of tear gas by police in riot gear. Clouds of tear gas drifted over the crowd, and people coughed and fell back before walking toward police lines again multiple times.

They held signs that said “Stop Killing Us” and “Black Lives Matter,” and they chanted “No justice, no peace.” One sign read: “IT WAS A BOOK.”

The scene was sometimes chaotic and tense, with water bottles and stones thrown at police lines, but many protesters called for peace and implored their fellow demonstrators not to act violently.

In addition to 16 police officers being injured, there were reports that rioters were hurling “rocks, bottles and traffic cones off interstate overpasses”. A number of vehicles were hit, and injuries were reported.

This kind of mindless violence makes absolutely no sense whatsoever. Those drivers had nothing to do with the shooting, but an object thrown at a vehicle from an overpass can literally kill someone.

How would killing a totally innocent person bring justice for Keith Lamont Scott?

Sadly, this is what happens when riots start. They all too often spin wildly out of control.

In addition to everything else, one group of protesters decided that it would be a really good idea to loot a Wal-Mart…

Protesters headed to the Walmart on N. Tryon in the University area after shutting down Interstate-85 at WT Harris Blvd. early Wednesday morning following the shooting death of 43-year-old Keith Lamont Scott.

Officers in riot gear blocked the entry to Walmart after it was broken into. Employees could be seen sweeping up shattered glass at the front entrance.

One employee told FOX 46 Charlotte some technology was stolen including, a flat screen television and iPads.

Once again, stealing televisions and iPads is not going to do anything to bring justice for Keith Lamont Scott. There are always people that see chaos as an opportunity to take advantage of others, and this is yet another example. We live in a society that is an advanced state of moral decay, and situations like this bring it to the surface.

What is truly unfortunate is that it sounds like the police actually followed correct procedure in this case. According to Police Chief Kerr Putney, Keith Lamont Scott was armed and refused to drop his weapon after repeated demands to do so…

Police Chief Kerr Putney said during a news conference that officers were searching for a suspect Tuesday when they saw Scott exit a vehicle with a handgun at an apartment complex on the city’s northeast side. “The officers gave loud, clear verbal commands which were also heard by many of the witnesses. They were instructing the subject, once he got out of the vehicle, to drop the weapon… Mr. Scott exited his vehicle armed with a handgun as the officers continued to yell at him to drop it.”

Unfortunately, we have gotten to a point where a riot is almost expected every time an African-American male is shot by police in this country. I think that Rush Limbaugh put it very well on his radio show…

It’s a sad observation, folks. I’m telling you, a sad, sad observation but it’s an observation that I don’t think I’m alone in making. It seems like rioting is almost expected now when there is a cop shooting. A cop shooting, period. Don’t care about the details. It seems like it’s now axiomatic that there’s going to be rioting or massive public protests or threats of rioting or threats of unrest every time the cops have to draw their weapons.

Without a doubt, police brutality in the United States is out of control, and this is something that I have been writing about for a very long time.

But rioting, looting and violence are not going to solve anything.

Instead, America is becoming increasingly divided, and anger and frustration are rising to unprecedented levels.

And if we are witnessing this much chaos now, while things are still relatively stable, what are things going to look like once economic conditions get really bad?

Our society is literally coming apart at the seams, and the chaos and the violence are going to get much worse than this. We wanted to push God out of every aspect of public life, and now we are beginning to see what that looks like.

*About the author: Michael Snyder is the founder and publisher of The Economic Collapse Blog and End Of The American Dream. Michael’s controversial new book about Bible prophecy entitled “The Rapture Verdict” is available in paperback and for the Kindle on Amazon.com.*