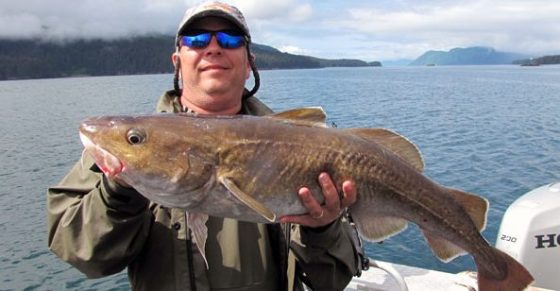 The Gulf of Alaska cod populations appears to have taken a nose-dive. Scientists are shocked at the collapse and starving fish, making this  the “worst they’ve ever seen.”

“They [Alaskan cod] get weak and die or get eaten by something else,” said NOAA’s Steve Barbeaux. The 2017 trawl net survey found the lowest numbers of cod on record forcing scientists to try to unravel what happened. A lot of the cod hatched in 2012 appeared to survive, but by 2017, those fish were largely gone for the surveys, which also found scant evidence of fish born in subsequent years. Many of the cod that have come on board trawlers are “long skinny fish” according to Brent Paine, executive director of United Catcher Boats.

“This is a big deal,” Paine said. “We just don’t see these (cod) year classes disappear from one year to the next.” The decline is expected to substantially reduce the gulf cod harvests that in recent years have been worth — before processing — more than $50 million to Northwest and Alaska fishermen who catch them with nets, pot traps, and baited hooks set along the sea bottom.

Barbeaux says the warm water, which has spread to depths of more than 1,000 feet, hit the cod like a kind of a double-whammy. Higher temperatures sped up the rate at which young cod burned calories while reducing the food available for the cod to consume. And many are blaming “climate change” for the effects on the fish, although scientists aren’t directly correlating the two events. “They get weak and die or get eaten by something else,” said Barbeaux, who in October presented preliminary survey findings to scientists and industry officials at an Anchorage meeting of the North Pacific Fishery Management Council.

The 2017 trawl net survey found the lowest numbers of cod on record, more than 70 percent lower than the survey found two years earlier.

Barbeaux said the cod decline likely resulted from the blob, a huge influx of warm Pacific Ocean water that stretched — during its 2015 peak — from the Gulf of Alaska to California’s offshore waters.

Biologists tracked increases in bird die-offs, whale strandings, and other events such as toxic algae blooms. Even today, its effects appear to linger, such as in the dismal survey results for salmon last summer off Washington and Oregon. – The Olympian

The blob began to take hold in 2014, and within a year had raised temperatures as much as 7 degrees Fahrenheit in some surface waters of the Gulf of Alaska. In deeper waters, where cod feed, the temperature rose by more than 1 degree Fahrenheit. The surface temperatures recorded during the blob’s peak could be close to the average at century’s end, according to a recent report on climate change by the U.S. Global Change Research Program. Thus, future blobs could push temperatures much higher than the most recent event.

“They may not necessarily be more frequent, but they will be more intense,” said Nicholas Bond, a University of Washington climate scientist who assisted in the Gulf of Alaska cod research. “This is really going to be uncharted territory.”