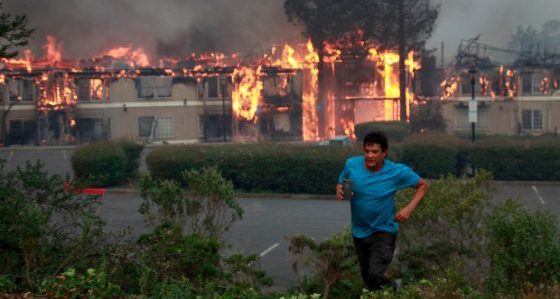 Fast-moving wildfires have already killed ten people in California, destroyed numerous homes, and spurred the evacuation of about 20,000 people. Santa Rosa is burning, and the death toll is expected to rise.

The Sonoma County Sheriff’s Office said seven people had died in Santa Rosa. “That number’s going to change,” Sonoma County Sheriff Robert Giordano said of the death toll in his jurisdiction. Officers are still searching for people to evacuate and rescue, he said, and “it’s just logical” more bodies will be found.

The fires ignited Sunday night and Monday and spread with alarming speed because of dry conditions, Cal Fire Director Ken Pimlott said at a news conference. According to CNN, more than 20,000 people evacuated, some with little notice. The fires have already destroyed an estimated 1,500 structures and have burned through 57,000 acres in eight counties.

Jesus Torres of Napa said a neighbor called to tell him the fire was bearing down on his house, CNN affiliate KPIX reported. “We gathered up a few of our things and our pets and headed out to our car,” Torres said. “We could see the sky was turning red. … We didn’t know (about the fire) until the last second. There was smoke all over the area.”

The first known fatality occurred as a result of the Redwood Complex fire in Mendocino County, Mendocino County Sheriff spokesperson Captain Greg Van Patten said. Cal Fire tweeted that two people died in the Atlas Fire in Napa County. The fire left whole blocks of residences in smoking ruins and destroyed landmark buildings like the Fountaingrove Inn, a 124-room hotel; a nearby event center, the Fountaingrove Round Barn; and classrooms at the Luther Burbank Center for the Arts, the Santa Rosa Press Democrat reported.

A large part of the town was evacuated, including Kaiser Permanente Hospital and Sutter Hospital. More than 100 patients were treated at Napa and Sonoma area hospitals because of fire-related injuries and issues, said Vanessa DeGier, spokeswoman for St. Joseph Health. Santa Rosa Memorial also accepted 12 patients from the two nearby hospitals that evacuated, including expectant mothers, she said. “Our hospitals are beginning to see patients with injuries incurred as a result of evacuation. This includes victims of car crashes and injuries from falling,” a statement from St. Joseph Health said.

Authorities imposed a sundown-to-sunrise curfew for parts of the city under evacuation orders. “I’m lucky,” Santa Rosa Mayor Chris Coursey said at a news conference. “My house is fine. My family is fine. My city is not.”

A separate wildfire in Anaheim, in Southern California, has spread to 4,000-5,000 acres and burned at least six buildings.  This fire is being dubbed the “Canyon Fire.”