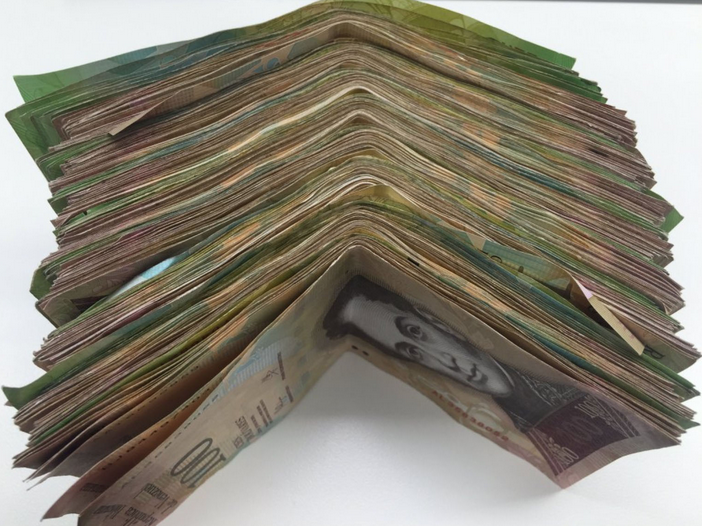 In the ongoing saga of Venezuela’s sad economic slide into hell, it came as a strong arm move on the part of President Maduro.

Bank runs are happening in Venezuela, but not to pull money from the banks; rather, to get their 100 Bs. bills into the banks before a 72-hour time limit expires and the notes become outlawed currency that is no longer officially recognized.

Long lines once again, and this time for the opportunity not to lose all the money that these struggling people have been saving up and safeguarding amid this insane and chaotic world of Venezuela:

Thousands rushed to their banks today. The 100 Bs. note will be out of circulation in the next 24h pic.twitter.com/XPFpUQ4x5P

Venezuelans are rushing to the banks this week in a desperate attempt to protect their savings from the government’s latest spasm of reckless financial policymaking.

[T]he government gave everyone a 72-hour countdown to turn in all their 100 bolivar notes before they’re removed from circulation.

[…]
The 100 bolivar note, the highest denomination of Venezuelan currency, is currently worth about 3 cents on the U.S. dollar. But Venezuela’s government announced on Sunday that it is removing the bills from circulating because they’re being purchased in bulk by “international mafia groups” that are allegedly trying to “overthrow” the struggling socialist government by hoarding money abroad and starving Venezuela of cash.

Economists say another likely reason for Venezuela’s cash shortages is that people are taking their increasingly worthless money to the border to trade it for dollars to buy essential goods. In Cucuta, a city on the Colombian border, hundreds of exchange houses buy bolivares from Venezuelans who cross into the neighboring country looking for shampoo, rice, flour and other goods that have become scarce in Venezuela thanks to the country´s rigid price controls.

[P]eople lined up outside banks carrying plastic bags and backpacks stuffed with 100 bolivar bills to deposit into their accounts and convert into digital savings before the clock ticks down to zero.

It appears to be a two-pronged measure – one to stop the impact of the hyperinflation of the currency that is being compounded by extremely limited ATM withdrawals, extremely large costs for basic goods – necessitating bags full of money for simple transactions.

On the second score, it is also a way to force everyone back onto the system, and to transform a peasant’s cash-based market economy into one operating digitally and inside the banking structure. There is growing dissent, anger and resentment; and the proliferation of the black market has made government controls futile – but this strong-armed tactic will help re-centralize control.

Interestingly, this restriction of cash isn’t just happening in Venezuela where an economic collapse is underway, but in other places, too.

Something bigger is in the works.

India just issued a harsh crackdown on currency, and removed large notes from circulation to combat the “black market” (read: offgrid); now Australia has done the same thing, as the race to eliminate cash is accelerating.

In the name of stopping black market transactions, they are forcing people onto a more tightly controlled grid.

The authoritarians are making their moves on all fronts: pic.twitter.com/2r2XC8Mb2c

Things are taking a definitive direction on a global, cashless basis. Let’s see how it changes things, and what can be done to resist the control it creates.

These Countries Have Nearly “Eliminated Cash From Circulation”