Ruling Class to the Slaves: You Will Eat Bugs 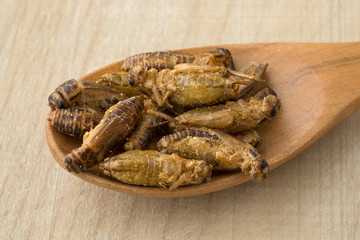 The next big step is to force the slaves to eat bugs, for their own good of course. This push is starting with force now, and they will attempt to get everyone who is willing to reduce their standard of living down to eating insects in the name of climate change.

“It’s been well documented that the world’s population will hit nine billion by the year 2050. Which means a vast number of extra mouths to feed, a massive increase in the demand for meat, and enormous pressure on our existing land and food resources. So, the search is on to find new types of protein to feed us and our animals. That’s where the farming of insects for food could provide the answer. Soon, Sunday lunch might be crickets, grasshoppers, caterpillars, or termites,” the Country File warned in 2018.

This was likely paraphrased from a Bill Gates quote. It reads similarly to a 2013 article, called “Future of Food”, published by Gates pushing his fake meat:

By 2050, the world’s population will grow to more than 9 billion and our appetite for meat will grow along with it … Put simply, there’s no way to produce enough meat for 9 billion people … That’s why we need more options for producing meat.

Cricket products seem to be where the rulers are starting. If they can convince people to consume cricket flour or other food-like items made from crickets, they will be able to slowly introduce other bugs that will become “acceptable.”

Horizon Edible Insects has a cricket farm located in West London.  If there’s suddenly an infestation of crickets in West London you know where they escaped from. Its website banner displays a large red cross with the words: “Edible insects made illegal in GB. Consultation deadline 14 August.”  Their blog states they want edible insects to be regulated under general food law, as in many countries outside the EU. “Please feel free to copy paste from our answers, if you agree” and send them to the Food Standards Agency.  It’s doubtful many agreed. -The Exposé

With a food crisis and famine looming, many will eat bugs to prevent them from going hungry. This is all about compliance. Will they be able to convince people to eat bugs? Probably. Especially if there’s nothing else available to buy.

This is also the same agenda that is forcing farmers off their land or preventing them from planting and harvesting.

We are supposed to do our part to save the planet by eating bugs, while they eat fillet mignon and fly around on private jets to wherever they want.