Researcher: “Young People Are Trapped In Debt In ‘Distressed’ Communities” 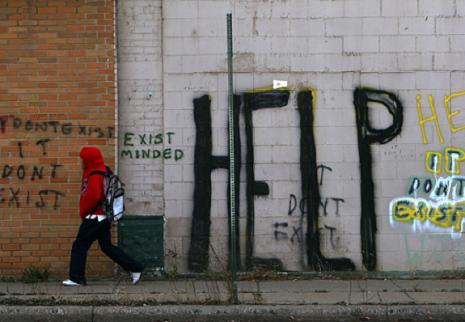 According to a researcher from the Economic Innovation Group (EIG), young people in the United States are not feeling the effects of the so-called “robust” economy we’ve supposedly been privy to. While we are constantly told the economy and the job market have boomed in the post-financial crisis period, Americans are struggling to find stability.

EIG says that a path to progress poses a “catch 22” situation for those who even attempt to bridge the gap.  Many will go to college only to be burdened by a low paying job and massive student loan debt that cripples their earning power. This creates an even worse situation for many living in the “distressed” communities, which EIG says are “increasingly rural.”

“Young people are kind of trapped in debt in distressed communities,” EIG Research Director Kenan Fikri told Yahoo Finance. “And they don’t really have a pathway to get out of their situation and be able to afford moving to a prosperous metropolitan area to try to turn the situation around. So it’s really in a catch-22 that individuals who are trying to advance themselves from these communities end up landing.”

In an EIG report, originally published back in October of 2018, researchers looked at around 25,800 zip codes, which is about 99% of the U.S. population, and compared two periods: 2007 to 2011, and 2012 to 2016. One of the primary reasons for the distressed communities being left behind, researchers found, was a lack of educational attainment. 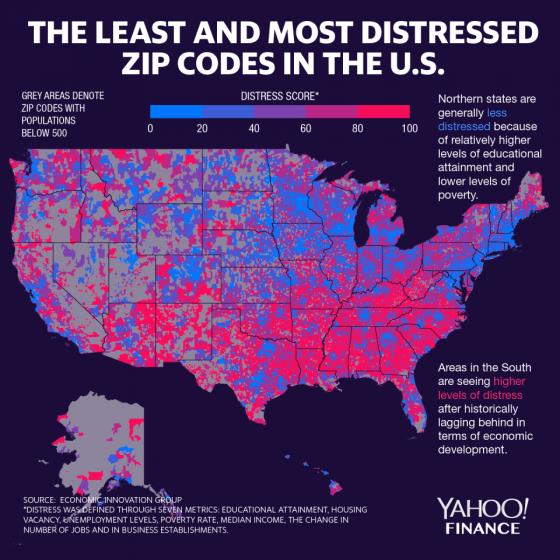 According to Yahoo Finance, “distress” (for the purpose of this study) was defined through seven metrics: educational attainment, housing vacancy, unemployment levels, poverty rate, median income, the change in the number of jobs, and in business establishments. “It’s really troubling, we did a casual overlay of the [Distressed Communities Index] map with that of where student debt is most burdensome and found that delinquency rates are higher in places where economic opportunity is worse,” Fikri said.

Keith Orejel, an assistant professor at Wilmington College who studies rural communities, told Yahoo Finance that the “plight of rural America as much more structural. When one gets down to brass tacks, at the end of the day, rural areas never recovered from the Great Recession. If you actually look at the data, it is quite shocking. Urban and metropolitan employment today is well above what it was prior to the Great Recession, whereas total employment in nonmetropolitan areas is still below what it was prior to the Great Recession. And there is clearly just an absence of job opportunities in the countryside that is making these sort of economically unappealing places to live.”

Orejel added that the decline of the manufacturing industry is also playing a role in impoverishing those straggling in the middle class. Manufacturing jobs that were available in rural areas and created jobs that retained young people served as a “staple of middle-class jobs in the countryside have just been utterly devastated.”

The unfortunate reality is that far too many in the United States have not seen any effects of the booming economy the mainstream media raves about.  Whether a person lives rurally or not is irrelevant. Large cities in California are bursting with homeless people, so it’s all relative. The reality, however, is that 78% live paycheck to paycheck, and that number will only go up.